I've been asked, at times, if I think it's possible that some conspiracy theories may be true.

And my answer is: of course.  Humans conspire.  It's the evil side of being a social animal; we sometimes use our social proclivities for immoral reasons.  So clearly there are some cases where "conspiracy theory" is actually "conspiracy fact."

It's just that I don't think most of the best-known ones -- the 9/11 inside job/controlled demolition claim, the Sandy Hook crisis actors claim, the HAARP weather modification claim -- have a scrap of evidence in their favor.  But other ones?  They have to be evaluated on their own merits, or lack thereof.

This comes up because I ran into a story yesterday that has all of the hallmarks of a conspiracy -- and yet I find it entirely believable.  I will say up front that I have no hard evidence that my claim is true.  It may be that what occurred here was entirely innocent, and the individuals involved are being straightforward and aboveboard.

But my opinion is that this stinks to high heaven.

I found the article because I was doing some reading about the latest on the Common Core, the ill-conceived and poorly-executed fad of the month for fixing public education by administering more standardized tests.  Oh, the standards themselves look okay: more understanding of math holistically, with less focus on minute details of symbol manipulation; more reading from source materials and writing to express understanding.  But the way it has been implemented has been haphazard at best, with an emphasis on test preparation, leading up to nationally-administered exams that put millions of dollars in the pockets of corporations like Pearson Education.

There has been a groundswell of anger about the whole thing, not only from teachers and administrators, but from parents.  This has led to a growing opt-out-of-the-tests movement, which is gaining traction across the country.  Oh, the fourth grade reading exam is tomorrow?  I'm sorry, my son is sick.  The make-up exam is in three weeks?  Oh, darn, I'm sorry.  He's going to be sick then, too. 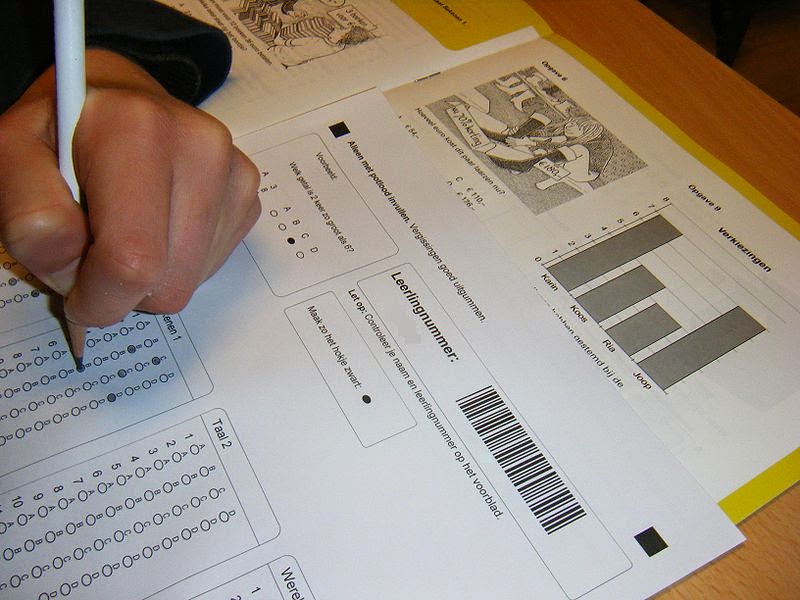 But right here in my home state of New York, there's been a revelation of an even darker side of the whole thing.  A story in the Syracuse Post-Standard ran a few days ago that described the fact that the Common Core exams, provided by Pearson, include multiple examples of...

Yes, you read that right.  This has gotten out despite Pearson's tight control on the exam content -- teachers and students are expressly forbidden to reveal, much less copy and distribute, test materials, even once the test has been administered.  But you can't keep something this egregious a secret.  So the 3rd through 8th grade assessments were barely collected and scored when it came out that Barbie, Nike, iPod, Life Savers, and Mug Root Beer had all made their way into the exams.

And not in subtle ways, either.  The Nike brand and slogan appeared in a paragraph about risk-taking.  A story about a busboy cleaning up a root beer spill was specified as cleaning up Mug (a trademark owned by PepsiCo).  They weren't even taking the trouble to hide the product placement, the way that television sitcoms do -- such as placing a two liter bottle of Coca-Cola on a counter in the background of a scene.  This was blatant.

Everyone involved, of course, has denied that Pearson is receiving kickbacks from the corporations that produce the products mentioned.  "There are no product placement deals between us, Pearson or anyone else," Tom Dunn, an Education Department spokesman, said in an interview on Fox News. "No deals.  No money.  We use authentic texts.  If the author chose to use a brand name in the original, we don’t edit."

Mmm-hmm.  And if several of those texts mention products from multi-million dollar corporations, that's purely a coincidence.

The growing influence of corporations on education is a horrifying trend.  Kevin Kumashiro, writing for the American Association of University Professors, writes:


Current reforms are allowing certain individuals with neither scholarly nor practical expertise in education to exert significant influence over educational policy for communities and children other than their own.  They, the millionaires and billionaires from the philanthropic and corporate sectors, are experimenting in urban school districts with educational reform initiatives that are not grounded in sound research and often fail to produce results.  And yet, with funding for public education shrinking, the influence of these wealthy reformers is growing...  The result is a philanthropic sector that is inseparable from the business sector, advancing school reforms that cannot help but to be framed by corporate profitability.

And that's just it, isn't it?  The corporate leaders are not specialists in education; they have never been teachers, administrators, served on school boards.  It is just that by virtue of the money they have, they feel entitled to direct educational policy.  And the sad fact is, because of the increasing desperation of school districts to stay afloat financially, the corporations are succeeding.  More and more, state educational systems are making deals with the devil, and sacrificing our children as a consequence.

So could the appearance of product placement in Common Core-based exams be an accident, a result of random choice of textual material that mentioned modern corporate products that are appealing to children?  Could it have nothing to do with the ongoing attack on the public school system by special interest groups and money-hungry boards of directors?  Could Tom Dunn have been telling the truth when he said that Pearson got nothing for their blatant product placement?

But I don't believe it for a moment.
Posted by Gordon Bonnet at 2:20 AM