Don't forget to enter our 50/50 pool to guess when Skeptophilia reaches its one millionth hit!  $10 to enter (please include your guess, date and time) -- use PayPal (link at the right) or email me for more information!

In yesterday's post, I pondered the question of why people seem to land on beliefs of various kinds despite there being little to no evidence of the kind that would be admissible in scientific circles.  Today, I want to consider the fact that in a lot of cases, it goes beyond people not caring whether they have evidence...

... they actively work against anyone trying to establish whether the claim is true.

The most famous example of this is, of course, the Shroud of Turin, the keepers of which resisted for years the requests of scientists to carbon-date the linen fiber from which it is made.  With good reason, as it turned out; the Shroud turned out to be only about seven hundred years old, which is impressive for a piece of cloth, but 1,300 years too recent (give or take a couple of decades) to be the burial cloth of Jesus.

So there's a justification for their reluctance, I suppose, but only if you accept the premise that "I'm pretty sure this is true" is somehow preferable to "I now am certain that this is false."

And we now have another relic to consider, because two historians, Margarita Torres and José Manuel Ortega del Rio, have written a book called The Kings of the Grail in which they identify a cup in the city of Léon, Spain as being the chalice used by Jesus at the Last Supper. 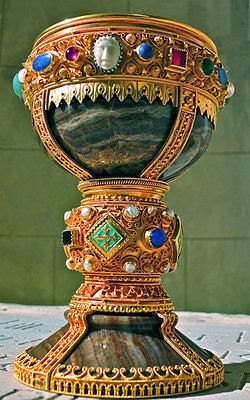 This announcement, of course, caused an immediate riot of attention, and nearly in the literal sense:


Curators were forced to remove a precious cup from display in a Spanish church when crowds swarmed there after historians claimed it was the holy grail, staff said.

Visitors flocked to the San Isidro basilica in the north-western city of León after two historians published a book saying the ancient goblet was the mythical chalice from which Christ sipped at the last supper.

The director of the basilica's museum, Raquel Jaén, said the cup was taken off display on Friday while curators looked for an exhibition space large enough to accommodate the crowds.

Because "Hey, seems like the Grail to us!" is evidently enough to start a stampede amongst the faithful.

As far as why the two historians think this is the real deal, they are basing their conclusion on some Egyptian parchments they found at Cairo's Al-Azhar University that said that the Grail was made of agate and was missing a fragment.  Which this one is.  And apparently it was given to King Fernando of Spain back in the 11th century by a Muslim emir, and a lot of Muslims live in the Middle East, and so did Jesus.

The researchers admitted, however, that there were over two hundred supposed Holy Grails just in Europe alone, which kind of muddies the waters a little.  And while the chalice was apparently made between 200 B. C. E. and 100 C. E., so were a lot of things.  In fact, a renowned scholar of ecclesiastical history, Diarmaid MacCulloch of Oxford, has already pronounced Torres and del Rio's assertion to be "idiotic."

So the jury is very much still out on this claim, as it would have to be.  There's damn little in the way of hard evidence that has survived since Christ's lifetime, what with the Fall of Rome and the Barbarian Hordes and the Dark Ages and all, not to mention various medieval religious wingnuts destroying old manuscripts because they were heretical.  So even if this was Jesus's chalice -- which odds are it wasn't -- it very much remains to be seen how you would establish it to the satisfaction of an unbiased historian.

Myself, I doubt the Holy Grail is in Spain.  I have it on good authority that in the Cave of Caer Bannog, carved in mystic runes upon the very living rock, are the last words of Olfin Bedwere of Rheged, which made plain the last resting place of the most Holy Grail.  And I'm told that they read, "Here may be found the last words of Joseph of Arimathea.  He who is valiant and pure of spirit may find the Holy Grail in the Castle of Aaauuuggghhh."

But of course, I could be wrong as well.  I'm not sure that Tim the Enchanter is all that much more reliable than Torres and del Rio, frankly.
Posted by Gordon Bonnet at 2:18 AM