Wine, violins, and trusting your senses

There's still time to put in your guess and enter the 50/50 contest for when Skeptophilia will reach its one-millionth hit!  The cost to enter is $10 (PayPal link on the right, or contact me by email).  Be sure to add a note telling me your guess!

I guess I know too much about neuroscience to trust my own senses.  It's a point I've made before; we get awfully cocky about our own limited perspective, when rightfully we should have remarkably little faith in what we see or hear (or remember, for that matter).  Oh, our perceptions are enough to get by on; we wouldn't have lasted long as a species if our sight and hearing led us astray more often than not.

But the devil is in the details, they say, and in this case it proves remarkably (and perhaps regrettably) true.  What you think your senses are telling you is probably not accurate.

And the worst part is, it doesn't matter if you're an expert.  It might even be worse if you are.  Not only does your confidence blind you to your own mistakes, at times your expectations about what you're experiencing seem to predispose you to blundering more than an amateur would in similar circumstances.

I first ran into this rather troubling phenomenon last year, when a study came out that indicated that wine experts couldn't tell the difference between an expensive wine and a cheap one -- if they were deprived of the information on the label:


French academic Frédéric Brochet... presented the same Bordeaux superior wine to 57 volunteers a week apart and in two different bottles – one for a table wine, the other for a grand cru.

The tasters were fooled.

When tasting a supposedly superior wine, their language was more positive – describing it as complex, balanced, long and woody.  When the same wine was presented as plonk, the critics were more likely to use negatives such as weak, light and flat.

Then Brochet pissed off the wine snobs even worse with a subsequent experiment in which it became apparent that the tasters couldn't even tell the difference between a red and a white wine:


[Brochet] asked 54 wine experts to test two glasses of wine– one red, one white. Using the typical language of tasters, the panel described the red as "jammy' and commented on its crushed red fruit.

The critics failed to spot that both wines were from the same bottle. The only difference was that one had been coloured red with a flavourless dye.

Now lest you think that this phenomenon only applies to wine snobbery, a study has come out from Claudia Fritz at the University of Paris that shows that the same expert-and-expectation bias can occur with our perceptions of sounds -- when she demonstrated that expert violinists couldn't reliably tell the difference between a Stradivarius and a newly-fashioned modern violin:


“During both sessions, soloists wore modified welders’ goggles, which together with much-reduced ambient lighting made it impossible to identify instruments by eye,” the researchers write. In addition, the new violins were sanded down a bit to “eliminate any tactile clues to age, such as unworn corners and edges...”

In the concert hall, the violinists were given free reign: They could ask for feedback from a designated friend or colleague, and a pianist was on hand so they could play excerpts from sonatas on the various violins.

Afterwards, they rated each instrument for various qualities, including tone quality, projection, articulation/clarity, “playability,” and overall quality. Finally, they briefly played six to eight of the instruments and guessed whether each was old or new.

The results: Six of the soloists chose new violins as their hypothetical replacement instruments, while four chose ones made by Stradivari. One particular new violin was chosen four times, and one Stradivarius was chosen three times, suggesting those instruments were the clear favorites.

You can understand how these results might upset classical violinists, perhaps even more than Brochet's experiment ruffled the feathers of the wine tasters.  Stradivarius, after all, is considered the touchstone for sound quality in a string instrument. 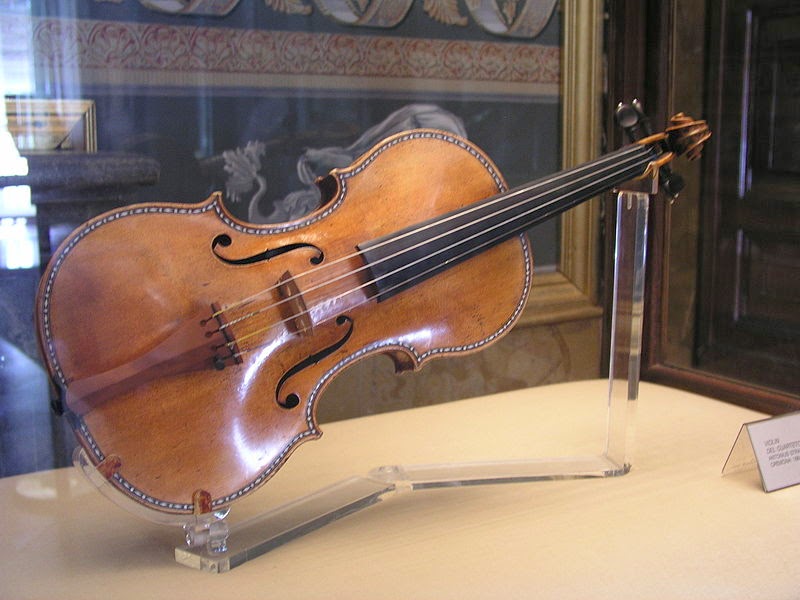 [image courtesy of photographer Håkan Svensson and the Wikimedia Commons]

There are 650 known Stradivari instruments, and their market value is estimated to be in the hundreds of thousands to millions of dollars.  Each.  The idea that a new -- albeit excellent -- violin could compete with a Strad in sound quality is profoundly unsettling to a lot of people.

Reasonably speaking, however, I don't know why it should be (other than the monetary aspect, of course).  Wines and music are both rich sensory experiences, and our appreciation of either (or both) is the result of not only the stimulation of millions of sensory neurons, but the release of a complex broth of neurochemicals that creates a feedback loop with our sense organs, emotional centers, and cognitive processes.  We shouldn't expect that experiencing either wine or music would be a predictable thing; if it was, they probably wouldn't have the resonance they do.

So it's not surprising, really, that our expectations about the taste of a wine or the sound of a violin should change our perceptions.  It's just one more kick in the pants to our certainty, however, that what we see and hear and feel is accurate in its details.  The idea doesn't bother me much, honestly.  Nothing that a little Riunite on ice can't fix.
Posted by Gordon Bonnet at 2:05 AM