I am referring, of course, to "Monster," that whiz-bang combination of sugar, vitamins, caffeine, and various herbal extracts of dubious health effect, which misleadingly does not list "demons" on the ingredient list.

But no.  Every time you consume a Monster energy drink, you are swallowing... 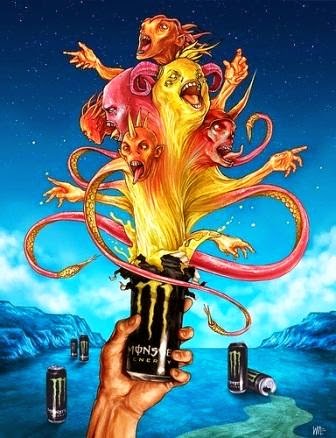 The Energy Drink contains ‘demonic’ energy and if you drink this drink you are drinking a satanic brew that will give you a boost... People who are not saved, who are not covered by the Previous Blood of Jesus Christ are susceptible to their attacks. Witchcraft is being used against the world on a scale so broad that it encompasses everything you see on a daily basis – right down to children’s clothing at your local clothing store.

So that's pretty unequivocal.  Never mind that if you'll consult the Hebrew numeral chart above, the logo looks just as much like "777" as it does like "666."

Unfortunately, though, there are people who think that the threat is real, which is a pretty terrifying worldview to espouse.  Not only did I confirm this by looking at the comments on the website (my favorite one: "It is truly SCARY that all the little kids who play their Pokemon and video games are being GROOMED to enter this gateway to hell.  Satan wants to devour our young and he will do it any way he can."), a guy posted on the r/atheism subreddit just yesterday saying that he'd been enjoying a Monster drink on a train, and some woman came up to him and snarled, "I hope you enjoy your drink IN HELL," and then stalked away.

Convenient for both sides.  The perennially-fearful hell-avoiders have something else to worry about, and the Monster people have an extra cachet for their product.  One hand washes the other, even if one of them belongs to Satan, who (if he were real) would probably approve wholeheartedly of capitalism and the profit motive.
Posted by Gordon Bonnet at 2:08 AM