Contacting the spirits of the... living?

One of the most important, and least considered, questions about belief is, "What would it take to convince you that you were wrong?"

It is something we should always keep in the front of our brains, whenever considering a claim.  We all have biases; we all have preconceived notions.  These only become a problem when either (1) they are unexamined, or (2) we become so attached to them that nothing could persuade us to abandon them.

I'm very much afraid that for some people, belief in the power of psychics is one of those unexamined, immovable ideas.  I say this because of the response people have had to a catastrophic faceplant performed last week by Skeptophilia frequent flier "Psychic Sally" Morgan.

"Psychic Sally," you may remember, is the performance artist who has thousands of people convinced that she can communicate with the dead.  She bills herself as "Britain's favorite medium," and fills halls with people who have purchased expensive tickets to her shows.  This is despite the fact that in a previous show she was caught "communicating" with a fictional character, and was once accused by a journalist of receiving information from a helper through an earpiece. 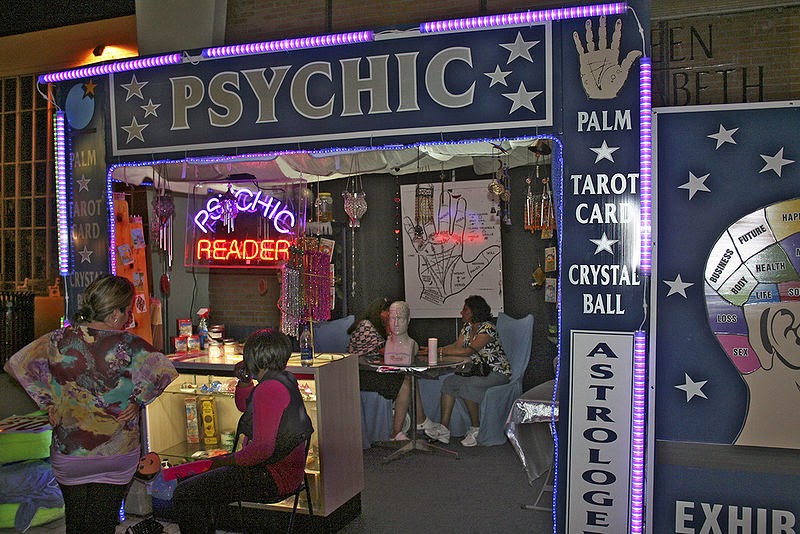 None of this diminished her popularity.  The first incident was only revealed in a newspaper article after the fact, and in the second, the journalist was actually sued by Psychic Sally for libel -- and she won.  There was no proof, the judge ruled, that the Sally had cheated.  The journalist, and the newspaper he worked for, were forced to pay reparations.

But this time it is to be hoped that things are different, because Sally did her monumental kerflop right in public.  Here's how blogger Myles Power, who was there that night, describes it:


Sally came to Middlesbrough on Friday night and her show started off very well.  Even though she was getting the vast majority of what she was saying wrong the audience did not seem to mind and seemed to be having a good time.  The point at which the audience became disillusioned with the performance was quite specific.  One aspect of the show is that audience members can submit photographs of dead loved ones, in the hope that Sally will select theirs, and give a psychic reading from it.  Sally pulled out of a box on stage one of these pictures.  She held the picture up to the camera and it was projected on the large screen behind her.  The picture was of a middle-aged woman and by the clothes she was wearing and the quality of the image, I guessed it was taken some time in the 1990s.  Sally immediately began to get communications from beyond the grave from a man holding a baby named Annabel……or was it Becky.  Noticing that no one in the audience was responding, Sally asked the person who submitted the photo to stand up.  A rather small chunky woman at the centre of the hall stood up and Sally once again began to get messages from the afterlife.  She was informed that this man and baby were somehow linked to the lady in the picture.  However the woman in the audience (who was now also projected behind Sally) disagreed and started to look increasingly confused as, presumably, nothing Sally was saying made any sense to her.  Sally then decided to flat out ask her if the woman in the picture had any children who passed and, when informed that that she hadn’t, responded by saying “I will leave that then.”

Sally then became in direct contact with the woman in the photo who began to tell her that there was a lot of confusion around her death and that she felt it was very very quick.  She later went on to say that the day Wednesday has a specific link to her death and that she either died on a Wednesday or was taken ill that day.  As the woman in the audience was not responding to any thing Sally was saying, she decided to ask how the woman in the photo was related to her.  It turns out the woman in the audience got the whole concept of submitting a picture of someone you wanted to talk to from the afterlife completely wrong – and for some unknown reason submitted a younger picture of herself.

So there you have it.  "Psychic Sally" has now been caught not only summoning up the spirit of a fictional character, she has gotten into psychic communication with the ghost of a person who is still alive and sitting right there in the audience.

Apparently the hall erupted in laughter when it became evident what had happened, and Psychic Sally never really did recover.  A number of people walked out.  People wouldn't answer her leading questions.  The audience, for that night at least, was a lost cause.

But here's the problem: now we have people rising to her defense, and the defense of psychics as a whole.  Just because Sally got it wrong once, they say, doesn't mean all psychics are frauds.  Here's a sampling of comments:


I know many genuine psychics who are sincere and good people, there are bad plumbers, carpenters etc just as there are good.  I was talking to a person who makes a living by speaking to the dead every week, he was a VICAR if you don’t believe fine but do not decry those who do as you will find out the truth one day as we all do.  The Sally Morgans and tub-thumping stage acts do no service to the genuine ones who just help without rooking people, she was so bad one night according to a TV comedian that they were booing her the following night when he was on.

I get really pee’d off when all people want to do is bad mouth sally make her look like she is some sort of fraudulant [sic] psychic.  Why do people only ever mention that she get names wrong n [sic] so on.  Sally has been doing this since she was 5 yrs old, and she has done show after show how bout [sic] talking about all the messages she has got spot on?  because they would out rule all the messages she may/or may not have got right.  I think personally people forget that because she mentions a name to someoone [sic] & they dont [sic] know who she is talking about that name could relate to a friend who is sitting at home & where they dont [sic] know there friends [sic] extended family it could have been for them, so it’s not that sally gets it wrong its simply because the person who the message is for is not simply sat in the audience.  Also this is not something sally can take a wild guess at, she is being given information from the other side & some people find that hard to except [sic].  Sally time & time again gives actual names of the person she has in spirit & gives names of that persons [sic] family you tell me how sally could have known this or is making it up?

THERE WAS PLANTS IN THE AUDIENCE, CAST NEGATIVE ENERGY ONTO SALLY, THAT IS WHY THE PEOPLE DO NOT SEE THE TRUTH BECAUSE THEY DRINK WATER FROM THE TOWN TAPS WITH HAS FLURECENCE [sic] IN IT TO CONTROL THE MINDS OF THE PEOPLE AND MAKE THEM THING THINGS THAT ARE NOT TRUE.

what no-one seems to have realised that psychics do not necessarily work with or communicate with spirit – all mediums are psychic but not all psychics are mediums – there is a big difference!

Okay, that was terrifying.  Especially the part about "flurecence" in the water.

Really, people: if "Psychic Sally," one of the most sought-after mediums in the UK, fails this catastrophically, shouldn't that force you to revisit your assumptions vis-à-vis all psychic phenomena?  I mean, think about it; what if there was a televised launch of a rocket, and right there in the public eye, said rocket went up into space and ran smack into one of the "crystal spheres" that ancient astronomers thought made up the heavens?  Wouldn't that make you want to ask the astronomers a few trenchant questions?

But with Psychic Sally's analogous bellyflop, apparently the answer is "no."  With the exception of the few people who actually saw her epic fail, no one much seems to be convinced who wasn't convinced already.  My guess is that after a few weeks of laying-low, she'll dust herself off -- and her act will be right back out on stage, wowing gullible audiences and raking in the money.
Posted by Gordon Bonnet at 4:28 AM