Are you feeling like your love life is a little cooler than you'd like?  Are you lacking in the ardor department?  Does it seem like you just don't have the romantic sizzle you once had?

If so, I have the solution.

All you have to be willing to do is to have someone set your crotch on fire.

I'm not making this up, and I wish I was, because after researching this I now feel like I need to spend the rest of the day in a protective crouch.  I picked up this story from Sharon Hill's always-reliable site Doubtful News, wherein we find out that in China, there has been a surge in the popularity of treating waning sex drive by placing towels soaked with alcohol over guys' privates, and then setting them on fire.

If the description wasn't enough, we have photographs: 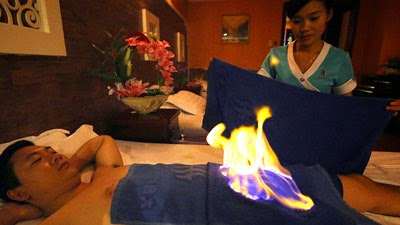 I don't know about you, but I can't imagine that my reaction to having flames spouting from my reproductive region would be just to lie there, hands behind my head, with a blissful expression on my face.  Now that I come to think of it, I can think of no circumstance in which I'd allow anyone to come near my reproductive region with flames in the first place.  But apparently, the guys in China love this.  The article quotes a 33 year old banker, Ken Cho, who says, "It is all about keeping blood flow moving rapidly.  The warmth from the burning towels speeds the blood through the body and it makes me perform 50% better in bed.  I have tried all sorts of therapies in the past to keep my sexual performance up to speed but this is by far the best."

Which, of course, raises several questions.  With guys, the issue isn't with getting the blood to flow rapidly, it's more with getting the blood to stay put.  If you get my drift.  And the whole "50% better" statistic just makes me think he's making shit up.  50% better for whom?  Did he query his girlfriend one night, asking her to rate his performance, and then he went to get the Great Balls Afire Treatment, and they did the deed again, and she said afterwards, "Yes, dear, that was at least 50% better than last time?"

Somehow I don't think this is the kind of thing that lends itself to a controlled study.

What I really wonder, though, is how anyone thought of this to begin with.  Because, after all, some poor schmuck had to be the first to try it.  Can't you picture it?  Dude goes to his doctor, and says, "Doc, I've been experiencing low sex drive lately," and the doctor says, "Oh, we can treat that.  All we have to do is set your penis on fire."

I don't know about you, but I would run, not walk, out of the office.  Even if many of us would fancy being a Hunka Hunka Burnin' Love, this is not the way to do it.

So what we have here is a combination of the placebo effect, self-delusion, wishful thinking, and high tolerance of risk.  If there was any doubt.

Anyhow, that's our contribution from the Extremely Alternative Medicine department for today.  Bringing up yet again my contention that every time I think I have found the most completely idiotic idea humanity is capable of, someone breaks the previous record.
Posted by Gordon Bonnet at 2:08 AM