Ouija wackiness south of the border

Ouija boards have been around for a long time -- since 1890, in fact -- but they've only really hit an upswing in popularity (and a commensurate downward spiral amongst the highly religious) in the last couple of decades.  In fact, I've dealt with them before, and wouldn't be back on this topic again if it weren't for our dear friends at The Daily Fail.

Mail.  The Daily Mail, is of course what I meant.  They've once again reinforced their reputation for high-quality, groundbreaking journalism with their story entitled, "Three Americans Hospitalized After Becoming 'Possessed' Following Ouija Board Game in Mexican Village."

In this story, we hear about twenty-something siblings Alexandra and Sergio Huerta, and their cousin Fernando Cuevas, who were visiting relatives in the village of San Juan Tlacotenco, Mexico, when they decided to whip out the ol' Ouija board and see what the spirits had to say.  And of course, as with most cases of the ideomotor effect, the spirits very likely didn't have much of interest to say other than what the participants already knew -- until Alexandra Huerta went into a "trance-like state" and started growling. 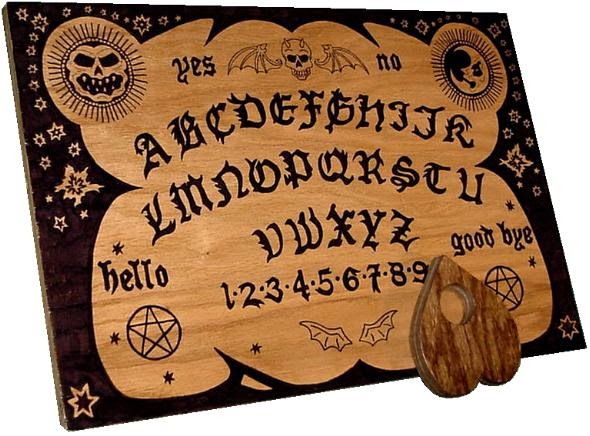 Then the two boys began to "show signs of possession, including feelings of blindness, deafness, and hallucinations."  So all three were taken to a nearby hospital, where all three were given "painkillers, anti-stress medications, and eye drops."

Because you know how susceptible demons are to eye drops.  Whip out the Visine, and Satan is screwed.

Interestingly, Alexandra's parents called a local Catholic priest for an exorcism, who refused because the three were "not regular churchgoers."  I guess as a priest, your job fighting the Evil One is contingent on the possessed individual belonging to the church Social Committee, or something.

But so far, all we have is the usual ridiculous fare that The Daily Mail has become notorious for -- a non-story about three young adults who either were faking the whole thing for attention or else had suffered panic attacks and some sort of contagious hysteria.  Worthy of little attention and even less serious consideration, right?

Wrong.  You should read the comments, although you may need some fortification before doing so, because I thought that the comments on CNN Online and the Yahoo! News were bad until I started reading this bunch.  These people bring superstitious credulity to new levels.  Here's a sampling, representing the number I was able to read until my pre-frontal cortex was begging for mercy:


I've had plenty of experience.  Like us, there is both positive and negative charges amongst, let's call it, the spiritual realm.  The most common cause of error is to act like it is an actual game with no consequences.  I assure you they are quite real.  I assure you that regardless of positive or negative matter (let's call "spirits" ), they can do some mind boggling things i.e. dimming candles, creating areas or pools of water in places that couldn't possibly form etc.  AND yes, if you blatantly agree to invite them in with you it could potentially shock you into a "possessed" state.  LIKELY, it was the shock of being witness to paranormal activity as nothing can really prepare you for it.  Rule #1: Be of the most steadfast, clear and pure mind and you will have an opportunity to experience something you would never be able to otherwise.  Rule #2 ALWAYS be respectful (which also may explain this possession scenario) to them!  Most are quite nice and knowledgeable!

Only a true exorcist Catholist [sic] priest can really rid someone of a possession.  Not all Catholic priests have this special "training" if that is even the right word to use (probably not).  It's serious stuff and the Catholic Church takes it seriously.  Perhaps we're not getting the full story on that priest's decision.  If the 3 young people were indeed "possessed," they likely still are...as sedatives won't fix that.  They need to try the C.C. again.  There is a procedure to be followed.

We just bought a house and there was a board in the closet.  I threw it out instantly and prayed for the Lord to protect the house, I asked Jesus to bless all who enter.  My mother played with one as a teen and it answered many questions correctly, she and her friend asking the other one's question to prevent guiding of the piece.  My God-fearing farm-raised Epispocal [sic] grandma walked by and the piece stopped abruptly-all I need to know.

Oh, so NOW you WANT a priest.  This is so sad you blame a priest, for not responding to what could be a physically (or life-) threatening situation, at night, brought on by the free will of consenting adults.  Out of many possible suggestions for this sad state of affairs, as a remedy, I can suggest daily praying the Rosary of our Blessed Mother.  Because, "when you fill your mind with Holy thoughts, the demons will flee upon approaching you as they see that you are not fertile ground for them."

This is NOT fake!  I know this for a fact.  After dealing w/ one, there were spirits and slamming doors in my house.

Good grief, people, will you just calm down?

It's a toy.  The thing was invented back in the 19th century as a kids' game.  There are no demons to call up, and even if there were, I doubt that a little piece of plywood with some poorly-stenciled letters would be sufficient to get them to pay a visit.  There have been tests run on people trying to mess with a Ouija board while blindfolded -- you'd think that demons wouldn't care, right? -- and it turns out that the only satanic messages these subjects spell out are things like, "kdolwicmsalpomng," which may mean something in the Language of Hell, but doesn't really mean much to the rest of us.

So the whole thing is kind of idiotic, which is what the original click-bait story on The Daily Mail intended.  They don't really care if what they say is well-written, or informative, or even true, as long as people give them hits.  (And for those of you who would like to read the original without contributing to TDM's share on search engines, the link I provided goes through the wonderful service DoNotLink.com, which allows you to see content without adding to their hit profile.)

Anyhow, that's our dip in the deep end for today.  My advice: don't go out of your way to throw out your Ouija board if you have one, but also don't expect it to tell you anything but random nonsense.  In that way, it's a little like The Daily Mail itself, isn't it?  Mildly entertaining, but mostly garbage, and gets boring pretty quickly.
Posted by Gordon Bonnet at 3:42 AM