C'mon, people, it's time to grow up a little.

When we're toddlers, we accept things without question.  If our parents say something, we pretty much believe that it must be true.  (Whether we do what they tell us afterwards, though, is another issue.)  After a time, we start experimenting, and testing the world -- sometimes with unfortunate results, such as when we decide to find out why Mommy says that Mr. Finger and Mr. LightSocket can't be friends.

But this highlights an important principle, which is that our first and best way to find out about things is by finding evidence.  "Show me why" is a pretty important first step to knowledge.

It's not the last step, though.  After the "show me why" stage we should move on to "but how do you know it's true?", which is a deeper and more sophisticated question.  Okay, from the evidence of my eyes, it looks like the Sun is moving across the sky.  In order to move past that to the correct explanation, we have to ask the question, "What if there is a better explanation that still accounts for all of the evidence?"

And in this case, of course, it turns out that there is.

There are other facets to this mode of inquiry.  What confounding factors could there be?  What if there are uncontrolled variables?  What if the person who made the original claim was lying?  What if my preconceived biases made me misjudge the evidence, or (perhaps) ignore some of the evidence entirely?  What if there is correlation between A and B, but instead of A causing B, B causes A -- or, perhaps, some third factor caused them both?

This whole process is what is collectively known as "Critical Thinking."  What is unfortunate, though, is that a lot of people seem to be stuck at the "I see evidence, so it must be true" stage, which is probably why the whole WiFi-kills-plants thing is making the rounds of social media... again.  Just a couple of days ago, a friend of mine ran across it, and asked the right question: "can this actually be true?" 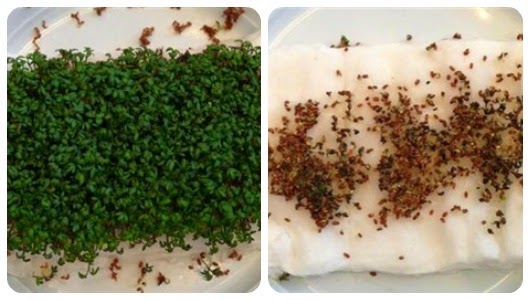 The claim is that five ninth-graders from Denmark had noticed that if they slept near their WiFi routers, they "had trouble concentrating in school the next day."  Because clearly, if ninth graders are distracted, it must be because of WiFi.  So the kids allegedly set up an experiment with cress seeds, placed some near a router, and had others in a "room without radiation," and had the results pictured above.

Well.  The whole thing is suspect from the get-go, because we're told nothing about other conditions the seeds were experiencing -- light, humidity, temperature, air flow, and so forth.  Was the "room without radiation" well-lit?  Were the seeds near the router warmer than the supposed control group?  There are a hundred things about this so-called experiment that we're not being told, and yet we're supposed to buy the results -- in spite of the fact that "control all variables but one, or the results are suspect" is the first thing taught in high school science classes.  (For a nice take-apart of this "experiment," take a look here -- and note, especially, that attempts to replicate the girls' experiment have not produced any results.)

What else?  First, it's from Spirit Science, a notorious peddler of woo.  Second, unless they were in a lead-lined vault, I doubt whether the control seeds were actually in a "room without radiation."  Even if you're some distance from the nearest router, you (and your room) are constantly being pierced by radio waves, which pass easily through most solid objects (if they didn't, old-fashioned (i.e. pre-cable) televisions and almost all modern radios would not work inside houses or cars).  Then there's the issue of how many thousands of WiFi routers in the world are sitting near perfectly healthy house plants -- for years, not just for thirteen days.  And even if WiFi did kill cress seeds, there's no guarantee that it would have the same (or any) effect on humans.  Don't believe me?  Go for a nice swim in the ocean, and then pour a cup of seawater on your marigolds, and see if the results are the same.  (In all seriousness, researchers face this all the time when developing medications -- therapies that work well in vitro or on lab animals might have different effects on human subjects.)

So to the people who are unquestioningly passing this around, just stop.  Exercise something past the You-Showed-Me-A-Picture-So-It's-True level of critical thinking.  If you see something that seems suspect, ask someone who might know the answer (as my friend did with this claim).  Or, in this day of information accessibility, you could simply Google "cress seeds WiFi experiment debunked" and you'll find everything you needed to know.

We all were toddlers once, and no harm done, unless you count unfortunate encounters with light sockets.  But let's exercise a little higher-level thinking, here, and not just accept whatever comes down the pike.
Posted by Gordon Bonnet at 1:44 AM