I remembering going to visit my parents during the Christmas season in the mid-1980s, and there was this new thing on the market for kids called "Teddy Ruxpin."  Teddy Ruxpin was a talking teddy bear that would move his eyes and mouth while "saying" pre-recorded lines, first on a cassette tape, and (in later models) on a digital device.

Teddy Ruxpin was a massive hit, largely due to an equally massive advertising campaign.  They flew off the shelves.  Toy stores couldn't keep them in stock.  Desperate parents of spoiled children paid huge amounts for black market Teddies Ruxpin.

I remember this primarily, though, for a different reason than crass commercialism, a phenomenon so deeply entrenched in American culture that it'd be hardly worth commenting on.  What I mostly remember about Teddy Ruxpin was that during the height of the craze, a batch of the toys went out that had defective playback devices.  They played the recordings slowly, with a lower pitch, with the result that Teddy Ruxpin's voice sounded like a cross between Morgan Freeman and Satan.

I still recall the news broadcast where a reporter, trying heroically to keep a straight face, talked about the recall, and activated one of the defective bears.  "I WANT TO PLAY WITH YOU," Teddy said in a sepulchral voice, all the while smiling cheerfully.  "HA HA HA HA HA HA."  Apparently the voice was scary enough that several children had already been traumatized when they activated their bear, expecting a cheerful cartoon-character voice, and instead got something that sounded like the soundtrack from The Exorcist.

My dad and I took about 45 minutes to stop laughing.  Over dinner, one of us would say, "PASS THE KETCHUP," in a Darth Vader voice, adding, "HA HA HA HA HA."  And then we'd both crack up again, much to the chagrin of my poor, long-suffering mother, who had many fine qualities but was born without a sense of humor.

This all comes up because of a new talking teddy bear, also designed for children, but with a special twist.

This teddy bear is supposed to be appealing to dead children. 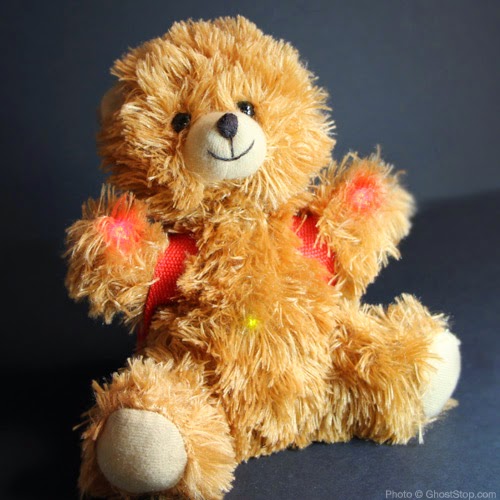 I wish I was kidding about this, but I'm not.  I heard about it on the Sharon Hill's wonderful site Doubtful News, and she has an excellent reputation for veracity.  Apparently the idea is that the bear, who is named (I kid you not) "Boo Buddy," says things that might be attractive or interesting to the spirits of dead children, who then will approach the bear and activate an EMF detector, making LEDs on his paws light up.

Here's the sales pitch, from Ghost Stop, the site that is selling Boo Buddy:


Not your average bear! BooBuddy is cute as a button and so much more. This ghost hunting trigger object responds to environmental changes and even asks EVP questions to initiate interaction and potential evidence.

BooBuddy is not a toy - he's an investigator!

Within the ghost hunting and paranormal investigations field, some theories suggest that using an object familiar and attractive to an entity may entice them to interact. This is called a 'trigger object'. BooBuddy is just that and more allowing us the ability to 'see' changes in the environment and initiate communication on it's [sic] own.

Set BooBuddy and turn it on to detect environment changes and start asking questions. Make sure to set a recorder or camcorder near the doll to document any potential responses. That, and BooBuddy loves being on camera!

I'm not at all sure what I could say about this, other than that I would buy one for the novelty value alone, if they weren't $99.95.  I guess if you believe all of this stuff about trigger objects and EMF fluctuations and so on, Boo Buddy is as sensible as anything else out there.  And if anyone does conduct any... um, empirical research using the teddy bear, I'd appreciate it if you'd let me know the results.

Unless it says something like "HEY CHILDREN...  DO YOU WANT TO PLAY WITH ME?  HA HA HA HA HA HA."  And then winks at you.  Because that would be scary as hell.
Posted by Gordon Bonnet at 2:14 AM