What IS it, my Preciousssss???

This will be my last new post for a couple of weeks, as I'll be on vacation through July 12.  But fear not -- to keep your appetite for woo-woo silliness and skepticism sated, I've lined up a series of reposts of some of the most popular articles from Skeptophilia in the past four years.  I hope you enjoy them... and be ready for some new posts on Monday, July 14!  Keep sending your comments and suggestions -- they are most appreciated.

Sometimes, I marvel at how little it takes to get the woo-woos going.

Take, for example, the article that appeared a few days ago in The Telegraph, that told the story of an "unnamed holiday maker" who was hiking in the hills of Huairou, north of Beijing.  He had gone off, he said, in search of a place to take a piss, and happened upon the following menacing-looking creature: 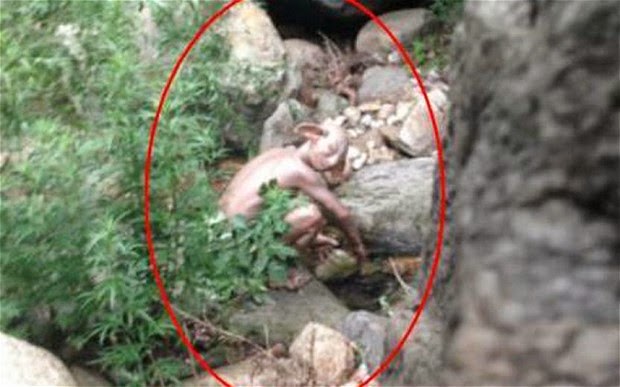 Well, the first thing I thought was that if I had been the one to run into this thing, that would have taken care of my need to pee right there.  Be that as it may, he evidently retained some of his presence of mind, at least at the time.  He said that he took out his cellphone and "took a few pictures of it," but that "now I am terrified."

What, he wasn't terrified at the time?  You just happen to run into a mostly-naked evil-looking humanoid with huge floppy ears, and calmly whip out your cellphone and snap a few shots -- and then days later, you look at them, and you scream, "Dear god, what is THAT?"

Well, despite the rock-bottom reliability of the story -- from the way it was reported, to the lack of names, to the fact that neither Gollum nor Dobby the House-Elf has ever been known to visit China -- this story's path through the interwebz resembles a giant pinball game.  I've seen it three times on Facebook, at least ten times on Twitter, and it's made four appearances on the various sites catalogued on Area51.org.

But the story didn't end there, as most of them do -- with a weird, blurry photograph and some unsubstantiated claims.  Because shortly after the original story began to make the rounds, someone stepped in and said, "Hey, y'all, calm down, this isn't real!" (as if that was in any doubt).  An "online commentator" (also unnamed) said that he and some buddies had been up in the hills making "a mini sci-fi film" and that this was just him in costume.  He also had gone off to pee, and got caught.

"And when I was having a pee," he wrote, "a person popped up and took pictures of me and shot away."

Maybe.  Who knows?  Given that the debunker also didn't leave his name, or any real proof that what he was saying was true, he could be lying, too.

So all we really have is the photograph, which is hardly convincing, in these days of Photoshop and other digital editing software.  I'm morally certain that this isn't an alien, or a cryptid, or any of the other possible non-solutions people have been suggesting.  It's either a hoax or an accident (if we're to buy the actor-having-a-pee answer).  As for any other possibilities -- we're not buying them, Precioussss... no, not at all.
Posted by Gordon Bonnet at 4:50 AM