I didn't realize what a fuss there still was over the sinking of the Titanic.

Okay, I know that it has some cachet as one of the biggest shipping disasters in history.  I know it was made into a movie, with heartthrob Leonardo DiCaprio in the title role.  (What, the movie isn't named Jack Dawson's Terrible, Horrible, No-Good, Really Bad Day?)  I know that the theme music, wherein Celine Dion's heart goes on and on and on and on and on and on, was played an average of 1,389,910 times a day for a year after the movie opened.

But no, that's not all there is to it, some folks say -- and by "some folks" I mean "people with the IQ of a bar of soap."  Because we haven't discussed why the Titanic sank.  And it wasn't because it ran into a great big hunk of ice.

Oh, no, that would be way too logical. 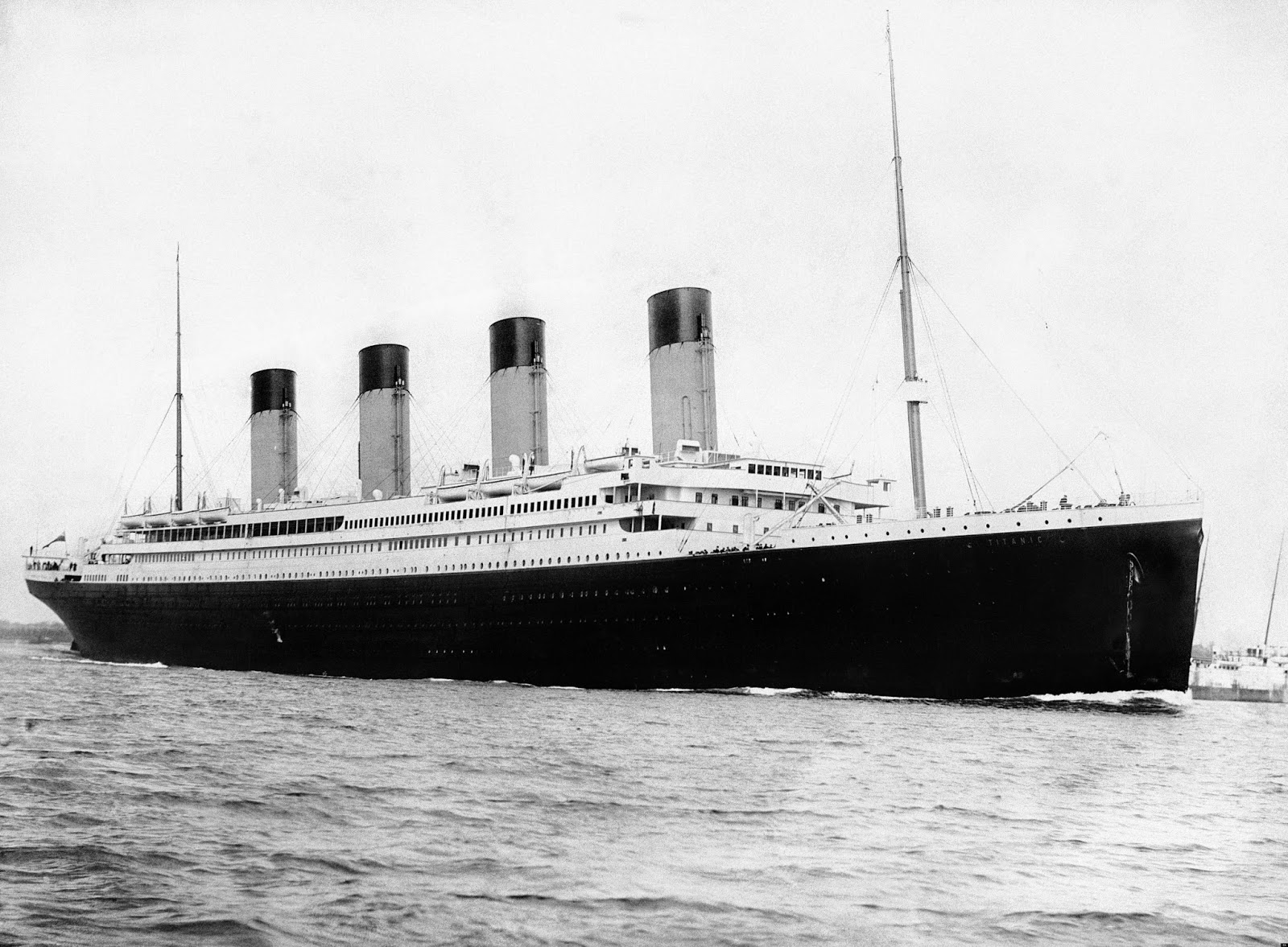 The R.M.S. Titanic in April 1912, just prior to its maiden (and only) voyage [image courtesy of the Wikimedia Commons]

You can forget about all of that.  No iceberg necessary.  According to a new theory, the Titanic sank because a bunch of time travelers from the future went back to witness the Titanic sinking from on board the ship itself, and the extra weight of the passengers is what caused the ship to sink.

Now, wait, you may be saying, at least after you recover from the faceplant you undoubtedly did after reading this novel claim.  "If the time travelers are what caused it to sink, then how did anyone know it had sunk, since the ship had to sink in order for the time travelers to know to come back in time to watch it sink?"

Well, if you asked that question, all I can say is that you need to watch more episodes of Star Trek: The Next Generation, in which Lieutenant Commander Geordi LaForge is always having to deal with paradoxes such as Tasha Yar's evil twin, who also turns out to be her daughter, coming after the Enterprise with revenge on her mind, because Tasha didn't actually get killed by the Sewage Monster, she was caught in an alternate universe time-warp and ended up having sex with a Romulan and giving birth to a daughter who looked exactly like her except for having pointy ears and wearing what looks like a dry-cleaning bag made of Reynolds Wrap.

So the Titanic really could have been sunk by time travelers.  At least if you believe that our world functions on the same level of scientific plausibility as Star Trek.

But that's not all.  (Oh, how I wish it were.)  Because apparently there are people who believe that not only was the Titanic capsized and sent to Davy Jones' Locker by misguided time travelers, that Jack Dawson was one of those time travelers.

Yes, we have people who have so lost touch with reality that they believe not only in ship-sinking time travelers, but that the movie Titanic is some kind of accurate historical documentary.  Why, you might ask, after recovering from a second, and more severe, faceplant?

Because the character of Jack Dawson in the movie has an anachronistic haircut, mode of speech, and attitude, and apparently somewhere in the movie mentions an artificial lake in Wisconsin that wasn't created until 1915.

That couldn't, of course, be because it was a movie.  And that the script-writers modernized the character for contemporary audiences, and got one miserable little detail wrong.

No, that can't be it.  It has to be that Jack Dawson was not only a real person, he was a time-traveler.

I think I'd better stop here, because like Celine Dion's heart, stupidity seems to go on and on and on, but my patience doesn't, and I'm reaching the point where my forehead won't stand much more in the way of impact stress.  So I'll wind up here, with the hope that no one is currently developing a theory that Game of Thrones is real history, because that would mean that Sean Bean actually was publicly executed, and heaven knows that poor man has been through enough.
Posted by Gordon Bonnet at 3:41 AM