It's been a long while since we've had a good report of cryptid activity, so I'm pleased to bring you a doozy today.  This one comes from the town of Lithia (near Tampa), Florida, so if you come from near there, you might want to be on the lookout.

The (unnamed) source of this peculiar story, which appeared yesterday on the phenomenally wacky site Phantoms and Monsters, says he was out walking his dog late one night last week, when he saw (and smelled) something pretty peculiar:


I was walking late one night with my German Shepherd, when I smelled an overwhelming stench of road kill.  I looked over into the woods near my home and saw a naked pale white man-like thing crawling in the woods.  It was on its hands, feet and knees about 3 inches above the ground.

So, we're already put on notice that this is going to be a pretty bizarre story.  I mean, look at the features of this thing we've already had thrown at us, in the first three sentences:

Let's do a little thought experiment here.  Picture yourself walking a backroad in Florida late one summer night.  Heavy, humid, still air, thick underbrush on both sides of the road.  Crickets singing, a stray mosquito whining in your ear.  The only other sound is your footsteps, and your dog's panting.  You see a naked white ghoulish creature floating in the woods, and it smells like decomposing flesh.

What do you do?

I'll bet you my next month's salary it's not what this guy did.  To wit:


I changed hands with my flashlight which my dog's leash prevented me from immediately shining it in that direction.  In the 2 seconds it took to change hands and shine the light on this thing, it had moved 20 feet to near a tree it was trying to hide behind.  It saw my light as it was swinging towards it and quickly crunched into a cannon ball like posture, and balanced on its toes & balls of its feet, hiding its face and held perfectly still.

So, let's add two more charming characteristics to our cryptic-of-the-week:

What we have here sounds like the love child of a zombie and a Weeping Angel.  If you needed something else to populate your nightmares.

But to me, the most amazing thing isn't what the guy reports he saw, but what he thought upon seeing it.  Not only did he not do what I would have done when he first spotted the thing, namely, piss his pants and then have a stroke, he calmly aimed his flashlight at it, and decided... that it must be a mime:


I got a overwhelming feeling that if I kept shining the light on it, that it would look up at me with glowing eyes and a weird face. So I continued on with my walk. I thought maybe it was a teenager doing a mime, but there was no one taking a picture and this thing had a oddly pronounced spine and was absolutely hairless.

Again, "Oh, hey, I bet that's a naked teenage mime" would have to be the very last thing I'd think of, in his situation.  Be that as it may, he thought that was a serious enough possibility that he calmly finished his walk with his dog (both of them got home unscathed), and proceeded to do an internet search:


I went home and looked on the internet to see if this is something kids are doing now (painting themselves white, shaving all hair off, rolling around in road kill and crawling around late at night in woods).

I teach teenagers, and I can say with some authority that no, this is not something that teenagers do.

But he did find a photograph from a cryptid report in Louisiana three years ago that looked like what he'd seen: 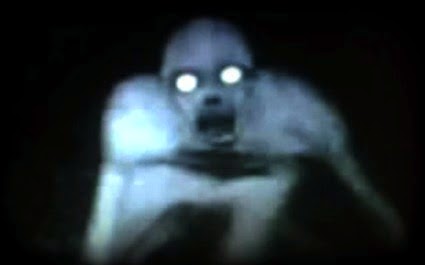 Then he asks if this may have been a cryptid called a "Rake," and if anyone knows more about it.

I didn't, so I did a bit of searching, and in short order, I found out that the Rake is yet another fictional entity of the same origin as Slender Man -- the site Creepypasta (here's their page on the Rake).  So whatever the guy saw, I can say with some authority that it wasn't the Rake, given that the Rake doesn't exist.

Of course, my suspicion is that the Lithia Floating Naked Ghoul probably doesn't, either.  Starting with the guy's bizarre reaction to an apparition that would have most of us screaming like a little girl and running for home so fast you couldn't see our feet, in the fashion of a Looney Tunes character.  Also, what about his dog?  I don't know about your dog, but if my dog scented a creature that smelled like roadkill, he'd be frantic to go make friends, because roadkill is basically doggie cologne.

So I sort of doubt the entire account.  But I would, of course.  Actually, I'm strongly suspecting that there were some mind-altering chemicals involved.  But if I'm wrong, and you're down near Tampa, keep your eyes peeled.  If you see any stinking naked ghoul mimes, be sure to let me know.