God in the driver's seat

I'm firmly of the opinion that you are free to believe anything you want, religious or otherwise.  People come to their understanding of how the universe works in their own fashion, and I really don't object if someone has come to a different understanding than I have, unless (s)he tries to force that understanding on everyone else.

That said, I am also of the opinion that religion makes people do some really bizarre things, sometimes.  Take Prionda Hill, of Fort Wayne, Indiana, who just last week ran into a motorcyclist with her car because she had decided that it was time for Jesus to take a turn driving. 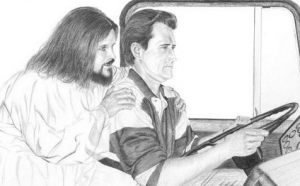 Hill was driving down the road, and all of a sudden her car swerved, and ran straight into motorcyclist Anthony Oliveri.  Hill kept on driving, despite the fact that she had damn near killed Oliveri.  According to the police report, Hill said that "she was driving and out of nowhere God told her that he would take it from here, and she let go of the wheel and let him take it."

Well, that didn't turn out to work so well.  God, who (at least in Hill's worldview) created the laws of physics, has also seen to it that they're strictly enforced, and her car went where not where god took it but where momentum took it, which was right into Oliveri's motorcycle.

But what makes this even crazier is that Oliveri, whose injuries include breaks in all of the ribs on his left side, a damaged spleen, and a bruised kidney, is attributing his survival to divine intervention.

"I remember it happened and I didn’t quite know what was going on for a split second," Oliveri later told reporters.  "As I grabbed the handle bars as the bike was losing control and I looked back around my left shoulder, all I see is her tire and the left bumper getting ready to run my face over.  Literally I was inches from that bumper and I just said to myself today is the day I die.  I just shut my eyes and said if this is the way that God wants to do it then I guess that this is the way we’re going to do it.  But I guess God has other plans for me, and I survived."

A woman hands the steering wheel over to god because she trusts that god will take charge of things, and runs over a motorcyclist, who thinks he survived because god takes charge of things?

I don't know about you, but I feel like I just got an irony overdose.

Of course, this sort of thing is what devout Christians really profess to believe, isn't it?  I mean, few of them take it to these sorts of extremes, but still.  When something good happens, it's because god has showered them with his blessings.  When something bad happens, "it's all in god's plan."  I don't know about you, but I think a lot of stuff just kind of happens because it happens, and the laws of physics really don't give a damn what your religious beliefs are.  If you let go of your steering wheel, your divine buddy is not going to take a turn driving.

So anyway, another hat tip to loyal reader Tyler Tork for this story.  His comment, which seems a fitting way to close:  "I expect that SCOTUS would rule that she was within her rights."
Posted by Gordon Bonnet at 3:52 AM