Irrationality, insanity, and the teachings of J. Z. Knight

One of the problems I face in selecting stories to highlight in Skeptophilia is that it is often difficult to tell the difference between a crazy idea that merits ridicule, and claims coming from a person who is mentally ill, and therefore deserves sympathy (and help).

Put another way, when does espousing an essentially irrational worldview cross the line into an actual psychosis?  There are millions of people who subscribe to belief systems that are profoundly irrational, and yet the people themselves are otherwise sane (although how a sane person could adopt an insane model for how the universe works is itself a question worth asking).  But there are clearly times where you've gone beyond that, and crossed into more pathetic territory.

As an example of the latter, consider the ravings of YouTuber Dave Johnson, who contends that the Civil War, World War II, the War in Afghanistan, and the War in Iraq never happened.  All of them were "media events" with manufactured battles and casualties, designed by political leaders to achieve various goals.  I'm not sure I can really describe the content of the videos -- and I'm also not sure I can, in good conscience, recommend that you watch them -- but he seems to be enamored of symbolism and numerology (he calls the attack on Fort Sumter "a 9/11-style attack on a pentagon") and then just denies everything else without stating any evidence.  "They went on to tell you that over 600,000 people died in (the Civil) War," he says.  "Untrue.  There's zero evidence of any battlefield footage of any death that I can find."

Well, the absence of "footage" may be because the Civil War happened before the invention of motion pictures.  But even forgiving that as a slip of the tongue, is he really discounting all of the photography by Mathew Brady? 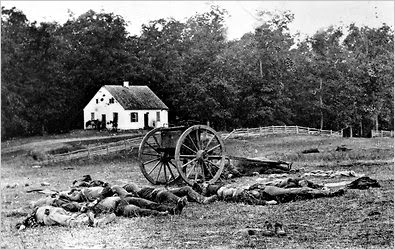 Aftermath of the Battle of Antietam, September 17, 1862, by Mathew Brady

I'm sure he'd call them all modern fakes.  He seems to have a profoundly paranoid worldview, which (by the way) includes believing that the Moon is a hologram.

The whole question comes up because of a much more public figure than Dave Johnson -- J. Z. Knight, better known as "Ramtha."  Knight has run her "Ramtha School of Enlightenment" since 1988, wherein she and her followers share the teachings of "Ramtha," a 35,000-year-old being from "Lemuria" who claims to be the "enlightened one."  Knight "channels" Ramtha, and then offers his pronouncements to the masses.

Up until recently, the whole thing has seemed to me to be an enormous scam -- a way to bilk the gullible out of their hard-earned money.  But just in the last couple of years, Knight/Ramtha has left behind her bland, "find-the-god-within" message, and has apparently gone off the deep end.

According to a story this week at AlterNet, Knight is no longer promoting "enlightenment" in Ramtha's voice; she is going off on drunken homophobic and racist rants.  Video and audio recordings of Knight that have been made covertly and then smuggled out of her compound in Yelm, Washington have revealed that the cult has moved into decidedly scarier territory of late.  The article states:


During the 16 or so hours... Knight will disparage Catholics, gay people, Mexicans, organic farmers, and Jews.

“Fuck God’s chosen people! I think they have earned enough cash to have paid their way out of the goddamned gas chambers by now,” she says as members of the audience snicker. There are also titters when she declares Mexicans “breed like rabbits” and are “poison,” that all gay men were once Catholic priests, and that organic farmers have questionable hygiene.

Add to this the fact that this ritual involves the drinking of huge amounts of alcohol -- they're called "wine ceremonies," and audience members are supposed to take a drink of wine every time Knight does -- and this begins to take on some of the characteristics of a meeting of the Aryan Nations instead of some quasi-religious ceremony.

And, of course, this is fuel to the fire to the neo-Nazis.  Knight/Ramtha is quoted at length on the race hate forum Stormfront, for example.  The two cults, different as they appear at first, both espouse a lot of the same ideology -- survivalism, an "elect" who will be protected when civilization falls, and a sacred message that needs to get out to the people -- at least the right people.

But she also likes to take pot shots at the Christians, and one of the recordings that has come to light begins with, "Fuck Jehovah!" and goes on to state that Jesus is "just another alien" who is on equal footing with Ramtha, and who came to the Earth to teach the same things that Ramtha did, but failed when power went to his head.

Knight, for her part, refuses to issue a retraction for any of her drunken screeds, claiming that all of the ugliness on the recordings is just a matter of Ramtha's words "being taken out of context."  She also accuses two ex-followers, Virginia Coverdale and David McCarthy, of spearheading a smear campaign started because of a love triangle involving Coverdale, Knight, and Knight's significant other.

But back to our original question; is Knight still, on some level, rational, or has she simply become psychotic?  Certainly her message now clearly qualifies the Ramtha School of Enlightenment as a hate group; but I'm more curious about Knight herself.  Before, she has just been classified as a religious version of P. T. Barnum, a huckster, suckering in the gullible and relieving them of their cash in exchange for a more-or-less harmless message.  Now?  She shows every evidence of insane paranoia.  So personally, she's more to be pitied than censured.

The difference, though, between a J. Z. Knight and a Dave Johnson -- the war-denier we started this post with -- is their relative reach and influence.  Johnson's YouTube videos, when I watched them, had on the order of a thousand views each.  Knight's message has reached millions -- her followers include some famous names like Salma Hayek, Linda Evans, and Mike Farrell.  Her New Age nonsense wrapped up as an educational video on quantum physics, What the Bleep Do We Know?, grossed ten million dollars and was in movie theaters for a year.  Knight herself lives in a 12,800 square foot French-style-chateau next to her school, can earn up to $200,000 for every speaking engagement, and has a net worth estimated in the tens of millions.

Which means that regardless of the cause of her crazy rantings, the damage she can do is very real.  Her home town of Yelm is full of her followers -- non-Ramtha-ites call them "Ramsters" -- and the Ramtha symbol appears on many businesses in town, telling RSE members that it's okay to do business there.  Local churches have started anti-RSE campaigns.  Ordinary citizens, caught in the middle, are scared.

For good reason.  Whatever Knight is now, her teachings are now no longer merely New Age pablum, but ugly, racist, homophobic invective.  And you have to wonder when she'll cross another line -- into saying something that induces the authorities to intervene.

Considering her followers, we could have another Waco on our hands.
Posted by Gordon Bonnet at 4:50 AM