It's a question I've asked before: how do "alternative medicine" and "faith healing" therapies that don't work get started, and then continue to sucker people?  You'd think that if you're told that "pressing a quartz crystal to your forehead will cure your headache," the first time you got a headache that didn't go away after the application of a crystal, you'd say, "Okay, this doesn't work," and go take an aspirin (i.e., medicine that is actually effective) instead.

Oh, I know about the placebo effect, and the possibility of spontaneous remission of symptoms.  But still.  That only takes you so far, especially given the crazy, non-scientific basis of some of these so-called remedies.

Take the claim that was just covered in The Daily Mirror -- that in order to cure hemorrhoids, all you have to do is to go to a temple in the Kunagami Shrine, north of Tokyo, and aim your butt at a "holy egg" (actually an egg-shaped rock) while a Shinto priest chants a prayer, and lo!  Your hemorrhoids will be cured. 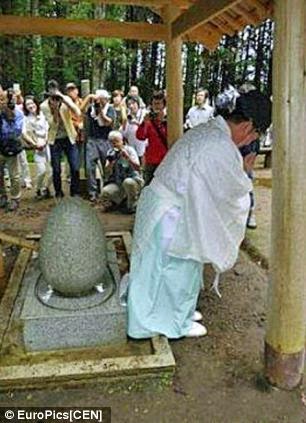 The article explains how the whole thing works:


Temple priest Osamu Hayakawa explained: "We perform a short service and afterwards individuals have to point their rear ends at the holy egg and say a special prayer.

"The devout will find the trip to the Kunigami Shrine will have the desired effect."

Sufferers apparently used to wash in a local river and afterwards ate boiled eggs at the temple to cure themselves of the condition, but the ceremony has been modernised.

Mr Hayakawa said: "In the modern world, it is not acceptable for people to be showing off their rear ends while bathing in public but we believe that it is fine if the essence of the ritual is still maintained."

Right!  Modernized!  Because that's the word I'd use to describe pointing your ass at a magic egg to cure an unpleasant medical condition.

Of course, we once again bump up against the reluctance people have to criticize silly ideas when they come under the aegis of religion, which this one clearly does.  My reaction predictably, is, "Why not?"  Ideas are just ideas; they either reflect reality, or else they don't.  Just because a particular ridiculous claim is a ridiculous religious claim shouldn't make any difference.

And the magic butt-mending egg is such a counterfactual religious claim.  But before we laugh too hard at the Japanese ritual, keep in mind that it's really no different from Christian claims of faith healing except on the level of details.

Which, unfortunately leads us into a darker side of this topic.  Just last year, Herbert and Cathleen Schaible of Philadelphia were charged with murder when a second child of theirs died from a treatable illness.  Their seven-month-old son Brandon died of bacterial pneumonia after days of prayer; four years earlier, they'd lost their two-year-old son Kent from a similar illness.  In both cases, they were directed by leaders of their church, the First Century Gospel Church, to use "faith healing" rather than conventional medicine.

"The church believe [sic] that people get sick because they’re not doing the right thing," a church member named John told reporters for NBC Philadelphia.  (He refused to give his last name during the interview.)  "God promised us that if we do his will, that there’s no infection; all these diseases that you name, would not come to you."

And, he added, the arrest of the Schaibles and the criticism of the church leaders amounts to "persecution."

My attitude is: if you want to call it persecution, fine.  The authorities should persecute the hell out of them.  If your faith involves letting a seven-month-old baby die because you think god is punishing him for "not doing the right thing," you have abandoned your right to claim "freedom of religion" for your practice.

But back to my original point; at what point do the adherents to such beliefs look at this sort of thing, and revise their worldview?  How long will it take before people stop, look at all of the examples of diseases left uncured by "the power of prayer," and say, "Okay, this doesn't work?"

Evidently, the answer for some people is, "forever."

I try to be understanding of people, I really do.  But this is one case where I just don't get it.  This is so far off in the realm of the completely irrational that I can't find any point of contact from which I could comprehend them.
Posted by Gordon Bonnet at 4:52 AM