(The last of a series of reposts, for your enjoyment while I'm on vacation.  First posted in September 2011.  I'll be back in the saddle on Monday!)

It is virtually self-evident that belief in an odd idea can propel you to do odd things.
Of the many odd things I've run into, however, the Georgia Guidestones definitely come near the top of the list.  Built of polished granite and standing sixteen feet tall, the Guidestones are arranged on the top of a treeless hill in Elbert County, Georgia.  They are so imposing (and so mysterious) that they've been compared to Stonehenge, or to the weird black monolith from 2001: A Space Odyssey. 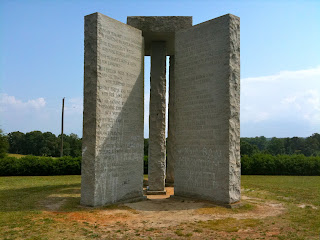 (photo courtesy of the Wikimedia Commons)
Not the least mystery about them is who commissioned them, and why.  They were erected, under mysterious circumstances, in June of 1979.  The land on which they stand is owned by Elbert County, and was deeded to them by a "Robert C. Christian," who had purchased the land from a Wayne Mullenix.  I put "Robert C. Christian" in quotes because this almost certainly is a pseudonym -- curious researchers have tried, unsuccessfully, to identify who he is (or was).  (There is apparently persuasive, if circumstantial, evidence that R. C. Christian is Ted Turner.)
The message on the Guidestones is a series of (if you will) Ten Commandments, evidently intended to help the survivors create a better society once the apocalypse knocks off the rest of us.  These pronouncements are presented in twelve different languages -- English, Chinese, Russian, Hebrew, Arabic, Swahili, Hindi, Spanish, Ancient Greek, Sanskrit, Babylonian Cuneiform, and Egyptian Hieroglyphics.  These last four, I suppose, are there in case the apocalypse spares some (for example) Ancient Sumerians.
The Guidestones themselves have various notches and holes cut into them, apparently in an effort to make them line up with the position of the sun, moon, and stars at various times of year.  The overall effect is to deepen the mystery, and perhaps heighten perception of the structure as resembling Stonehenge.
Given the time and effort someone put into all of this, and how seriously he seems to take himself (I'm assuming that R. C. Christian is a man, given the male pseudonym), I find it a little disappointing how generally inane the Guidestones' "Ten Commandments" are.  Some of them aren't bad ideas, but are hardly earthshattering ("Protect People And Nations With Fair Laws And Just Courts"), while others seem a little pie-in-the-sky ("Unite Humanity With A Living New Language.")  I have to admit to some disappointment upon reading what they said.  Given all of the mystery, and all the expense someone obviously went to, I was expecting something a little more profound.  (You can read the entire message on the Guidestones here.)
What I find even more baffling about this whole thing is how people have responded to them.  New Age types mostly think they're great.  Yoko Ono, for example, says they are "a stirring call to rational thinking."  Some prominent Christian thinkers, predictably, disagree, one Evangelical minister calling them "The Ten Commandments of the Antichrist."  An Atlanta psychic, Naunie Batchelder, predicted as far back as 1981 that they were of alien origin, and their purpose would be revealed "within thirty years."  (The aliens had better get on that, as they've only got three and a half months left.)
Conspiracy theorists, of course, think they're just the bee's knees.  Mark Dice, whose favorite topics are the Illuminati and the New World Order, believes that they are of "deep Satanic origin," and has demanded that they be "smashed into a million pieces."  Dice thinks that somehow the Bilderburg Group were involved with the funding and construction of the Guidestones.  A researcher named Van Smith has done some numerological analysis of the Guidestones and claims that they are somehow connected to the Burj Khalifa in Dubai, the world's tallest building -- and believes that the dimensions of the Guidestones, when properly manipulated, predicted the date of death of Dubai's emir, Sheik Maktoum bin Rashid al Maktoum.  Noted wingnut Alex Jones thinks the Rosicrucians are responsible.
All we need is to somehow get the Knights Templar involved, and we'll have a full house of bizarre explanations.
And, of course, all of these folks have followers, and those followers are happy to take action, when they're not picking at the straps of their straitjackets with their teeth.  Chickens have more than once been sacrificed in front of the Guidestones.  They are a frequent meeting site for a coven of Wiccans from Atlanta.  The Guidestones themselves have been repeatedly defaced, most recently by spray-painted graffiti stating "Death to the New World Order" and "Jesus will beat u satanist."  There has been more than one attempt to topple the Guidestones, but given that each of the stone blocks weighs twenty tons, those efforts have been thus far unsuccessful.
So, that's today's little dose of weirdness.  Next time I'm in Georgia, I'm going to make an effort to go see these things.  Not that I particularly think their message is all that profound -- but just to have had a chance to see, first-hand, what all the fuss is about.  And since one of the Guidestones' rules says, "Rule Passion - Faith - Tradition - And All Things With Tempered Reason," I figure I owe them at least that much.
Posted by Gordon Bonnet at 3:49 AM