The ley of the land

(One of a series of reposts, for your enjoyment while I'm on vacation.  First posted in September 2011.)

I ran into the idea of ley lines fifteen years ago on a trip to the UK.  I spent a month in the summer of 1995 hiking in the north of England, visiting old cathedrals and monastery ruins, and while I was at Rievaulx Abbey, I had a chance meeting with an English woman who said that if you connected the positions of holy sites on a map with straight lines, it made a pattern.
"They sited monasteries, cloisters, and cathedrals where they did because they were places of power," she said.  "The ley lines are channels of psychic energy, and where they intersect, it creates a kind of vortex.  The ancients felt this, and that's why they built monuments there, and later churches and abbeys."
Couldn't it, I asked her, also have to do with building in places where there was good access to water, and perhaps pre-existing roads?
"I suppose that also might have had something to do with it," she said, sounding doubtful.
For all her claims of the antiquity of this idea, the concept of ley lines is less than a hundred years old, and at first, it had nothing to do with anything psychic.  Alfred Watkins, an amateur archaeologist, noted in his books Early British Trackways and The Old Straight Track how often multiple sites of archaeological or historical relevance lay upon the same straight lines, and he coined the term "ley lines" to describe this phenomenon.  He suggested that the reason was for ease of road-building -- especially in the southern half of England, where the terrain is mostly gentle, a straight line connecting several population centers is the smartest way site roads and settlements.  It wasn't until 48 years later that noted woo-woo John Michell, author of The View Over Atlantis, took Watkins' ley lines and connected them to the Chinese idea of feng shui and came up with the theory that ley lines were rivers of psychic energy, and the intersections ("nodes") were places of power.
The interesting thing is that Watkins himself wasn't even right, appealing though the idea is.  Mathematician David George Kendall and others have used a technique called shape analysis to demonstrate that the occurrence of straight-line connections between archaeological sites in England is no greater than you would expect from chance.  Put simply, a densely-settled place like England has so many sites of historical relevance that if you are allowed to pick and choose, you can find any number of lines that intersect, or at least clip, interesting places.
Take a look, for example, at the following diagram (courtesy of the Wikimedia Commons): 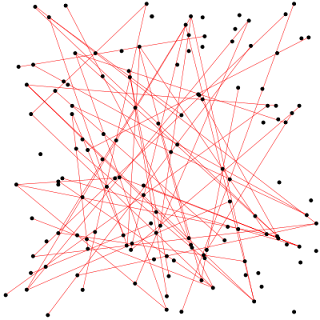 This image shows 137 randomly-placed points.  A computer program was employed to find all of the straight-line connections of four or more points -- and it found eighty of them!
So, even if you eliminate all of the woo-woo trappings from the idea, it seems like the whole concept of "sacred sites" falling along straight lines is attributable to coincidence.  A pity, really.  I have always wondered if our house was at the intersection of two ley lines.  I was all prepared to use Intersections of Psychic Energy Channels and Nodes of Power Vortexes to explain why my digital alarm clock runs fast and why the dryer keeps eating my socks.
Posted by Gordon Bonnet at 5:37 AM