Well, I'm back, and many thanks to my patient readers for sticking around during my two-week hiatus.  I'd like to launch this week with some observations from my travels, along with a few photographs taken by my wife (who is the amazing artist Carol Bloomgarden) and me.

Our travels this year took us out into the American West, where we spent some time in the Grand Tetons, Yellowstone, and Glacier National Park.  First of all, the natural beauty is stunning; while I like to think that we live in a part of the world that has awesome scenery (upstate New York), the grandeur of scale out there is something few places in the world can match. The Grand Teton Mountains, from near Jackson Hole, Wyoming

There are a few additional things that have always impressed me about the American West, though.  One of them is that the Yee-Haw Attitude is alive and well, both in its positive and negative senses.  There's a feeling that personal freedom is paramount, as long as what you're doing doesn't impinge upon anyone else's personal freedom.  We did a lot of geocaching out there (and if you don't know about this amazingly weird and fun hobby, check it out here) -- and one of the caches we were seeking took us across a construction site up in Glacier National Park.  We started to cross, and were approached by two construction workers.  I expected that they were going to tell us to bugger off, that we weren't allowed there -- but they said, and I quote, "Do what you like as long as you don't mess with the equipment."

As another example of this, consider speed limits.  Near urban centers, even in the west, it's the usual 55 mph.  But as you get further out into the middle of nowhere, it goes up to 60, then 65, then 75 mph, until (in central Montana) they give up entirely.  "All right, go however the hell fast you want to," they seem to say.  "We know you're going to anyhow."

All of which is kind of funny, because our rental car was a Chevy Spark.  If you are unfamiliar with this car, all I can say is that the Chevy Spark is to cars as a pug is to dogs -- small, stubby, cute in a squashed sort of way, and not really particularly well adapted for any useful purpose.  I think that the Spark got its name from the fact that "spark" represents the energy level of which the engine is capable.  I noted that the speedometer went up to 120 mph, which was grimly amusing, because I don't think the Spark could go 120 mph if you dropped it off a cliff.  It went downhill like a boss, but going up (for example) Logan Pass involved lots of encouraging words from us and lots of nasty looks from the drivers of the cars who were in line behind us going 14 mph and who wanted for some reason to get to their destination that day. 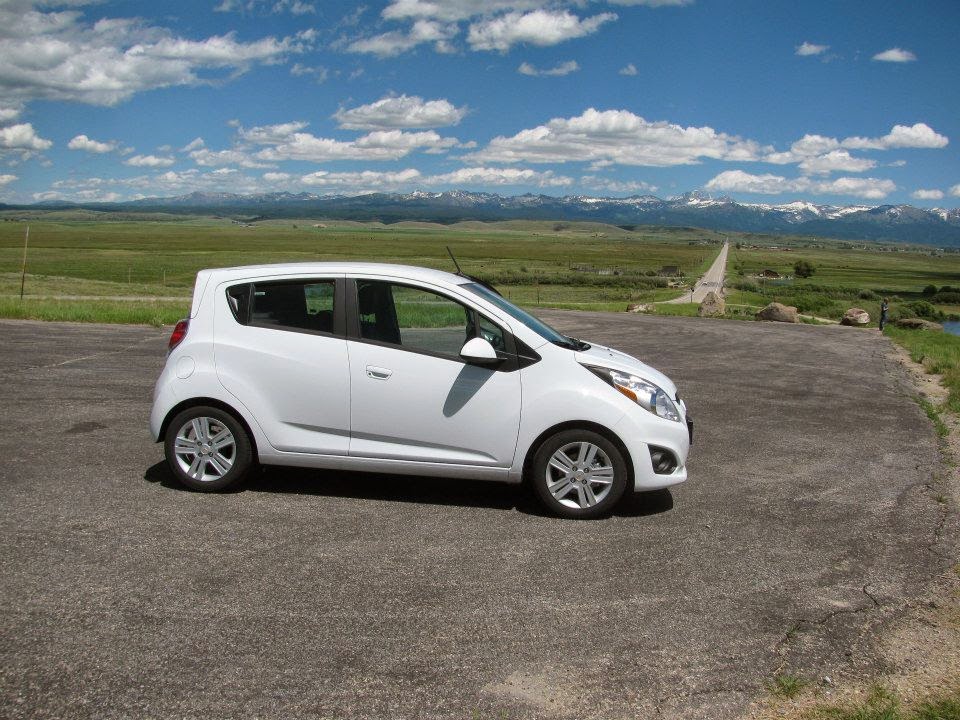 Our Chevy Spark, recovering from a long climb

Of course, I spent a lot of time indulging in my favorite hobby, which is birdwatching.  Much of my behavior illustrated Dave Barry's contention that there is a fine line between a hobby and a mental illness.  For example, we were at the LeHardy Rapids on the Yellowstone River, a site of amazing beauty, and there was also a rainbow trout run going on, which is pretty spectacular to see.  But my wife had spotted a Harlequin Duck, a bird I'd never seen, sitting on a rock in the middle of the stream.   The following conversation ensued:


Other tourist:  Wow!  This place is gorgeous!

Other tourist:  That water is so blue!  And the trees!  And look at all of the trout in the river!

Other tourist:  Yellowstone is one of the natural wonders of the world!

Me:  I know.  That's one incredible duck. 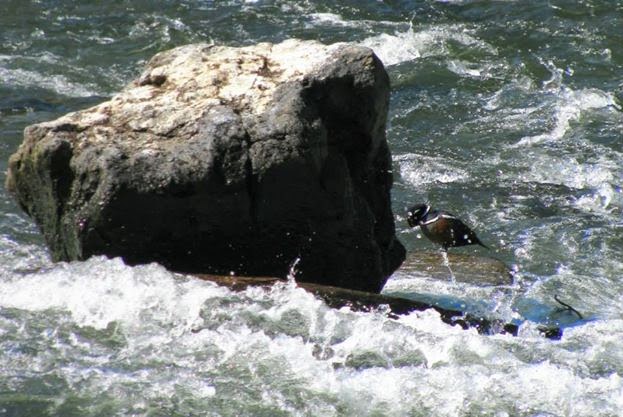 The duck in question

Which is not to say that I didn't appreciate other stuff.  In particular, Yellowstone is an astonishing place, to the point of parts of it being kind of surreal.  The hot springs, especially, which look like some amateur artist decided to use up all of their supply of brightly-colored acrylics in painting a nature scene.  If you ever get a chance to go to Yellowstone, the must-see (in my opinion) isn't Old Faithful, but Grand Prismatic Spring, which is colored by minerals and brilliantly pigmented bacteria: 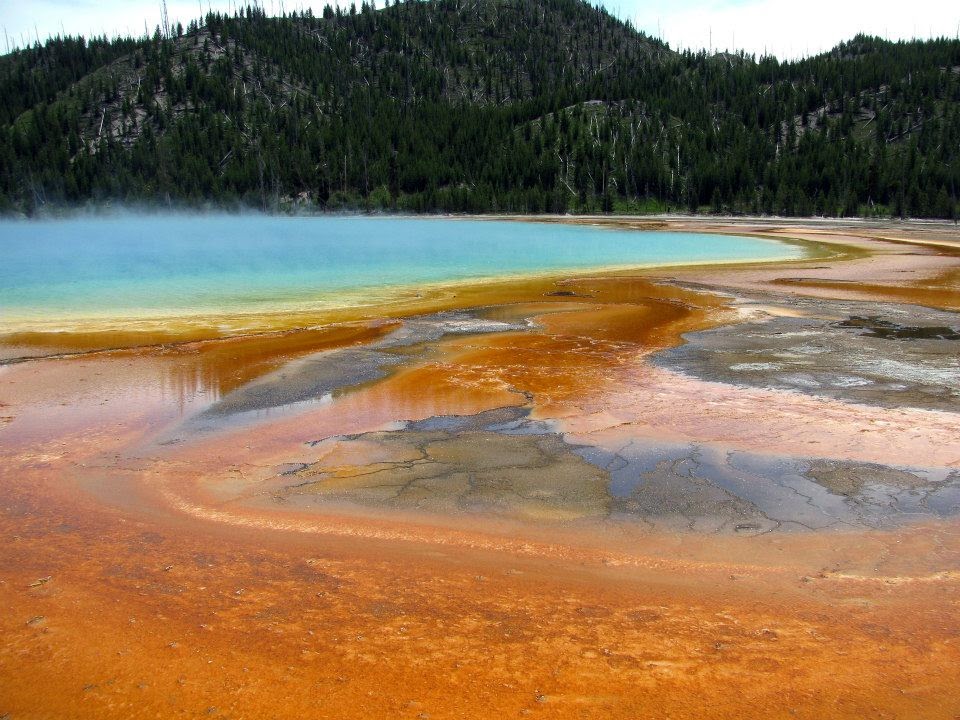 Speaking of Yellowstone, it was in the forefront of my mind to consider the possibility of eruption of the hotspot/supervolcano that lies underneath Yellowstone Caldera, largely because over the last couple of years the woo-woos have been running around making little squeaking noises about how an eruption is imminent and you can tell because the bison and elk are fleeing from the park in terror, and also because the evil US government is evacuating the place and herding everyone into FEMA camps.  Well, we saw lots of people who weren't being held prisoner in FEMA camps, not to mention hundreds of bison, and I can say first-hand that the bison showed no evidence of fleeing in terror.  Most of them were simply moseying about in terror, or even snoozing in terror. 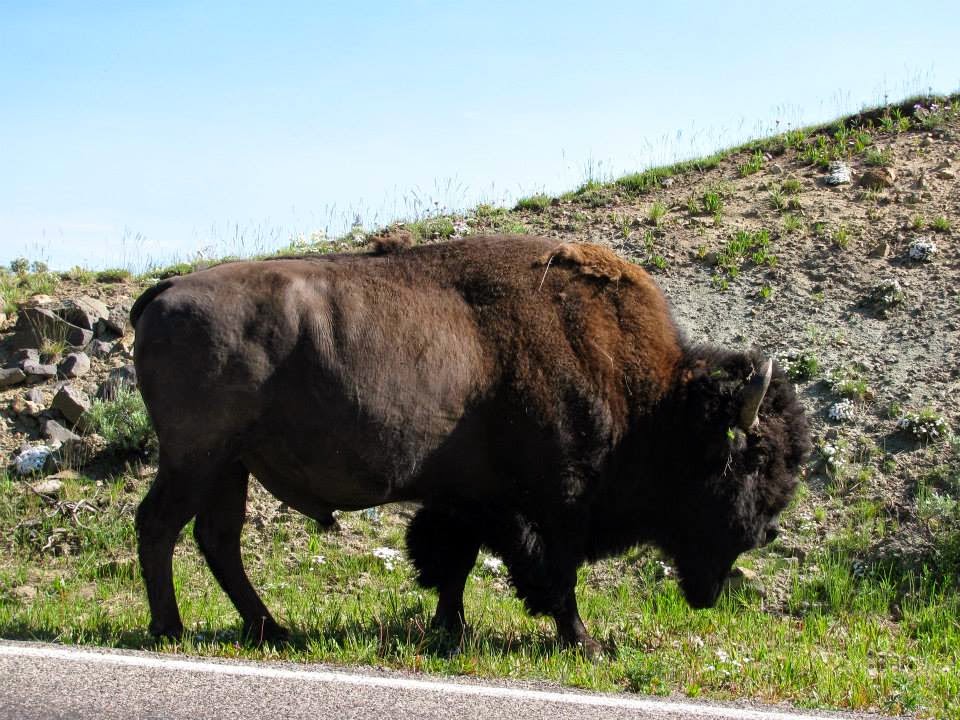 A bison, standing around munching on grass in terror

It did occur to me, though, that these might be suicidal bison, who realized that the volcano was going to blow and decided to stick around because they were depressed and wanted to end it all.  And in fact, "Meh, fuck it" seemed to be a common attitude amongst the wildlife we saw.

Which is a good thing, because otherwise the main cause of death in Yellowstone wouldn't be people getting vaporized by a volcanic eruption, but tourists being killed in messy ways because of sheer stupidity.  I have never seen so many people who evidently do not understand that "hot spring" means "so hot that it will boil your skin off," and "wild animal" means "animal that could easily kill you if it wanted to."  A former student of mine, who has worked in the national parks, told me that just a few weeks ago, a guy tried to put his son on the back of an elk so that his wife could take a photograph, and elk bucked and kicked the father in the head.

We didn't see anyone get killed in Yellowstone, but it wasn't for want of trying.  We saw one woman who was jumping up and down in front of a bison, waving her arms and shouting, "Hello, bison!  Hello, pretty bison!" so that it would turn its head for a picture with her.  When it refused to cooperate, she laughed and said, "Bye-bye, pretty bison!" and scampered off.  But the worst was when we saw a bear by the side of the road... 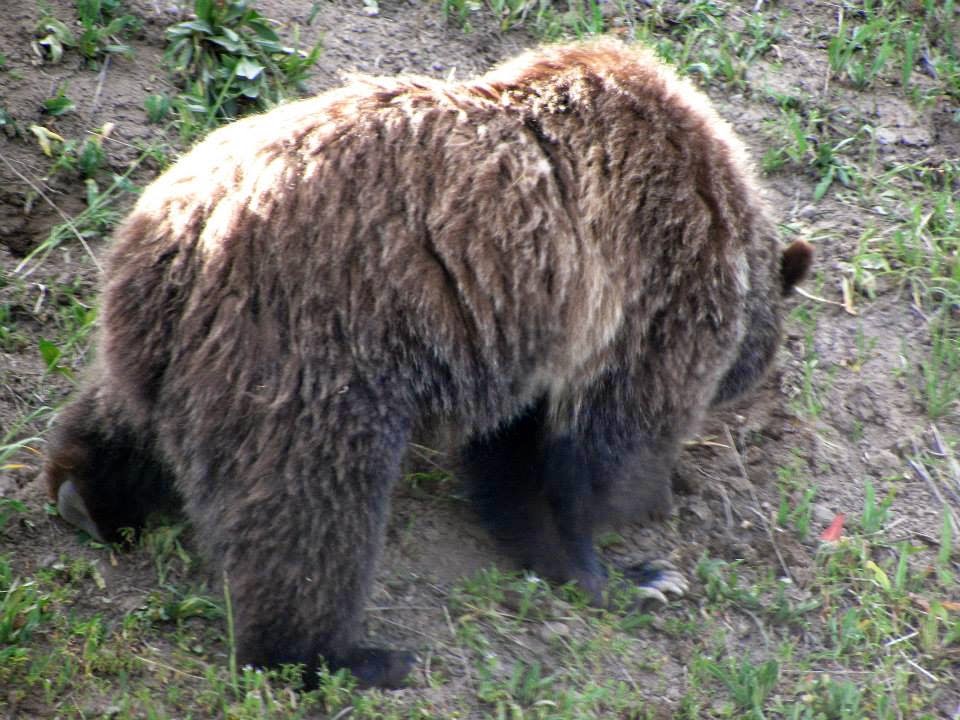 Okay, I took a picture of it, but using my zoom, and from the safety of my car.  But there were dozens of people who got out of their cars.  Despite the fact that this is clearly the most dangerous animal in the park, and is unpredictable.  And huge.  Which is why you're supposed to carry a whistle and pepper spray with you whenever you hike in the area.

You do know how to tell the different kinds of bear scat apart, right?  Black bears eat a lot of fruit, so black bear poop contains seeds and stems.  Brown bear poop often contains fish bones.  Grizzly bear poop, on the other hand, contains whistles and smells like pepper.

But that didn't stop people from acting like complete raving morons, running up to the wild animals and stepping on unstable ground over boiling hot lakes, despite the multitude of signs and warnings that were everywhere.  And I'm sure that if something bad had happened, the last thing that would have gone through these tourists' minds before being mauled and/or cooked to death would have been, "Why didn't someone warn me of the danger?"

But despite all that, the trip was amazing, and I highly recommend it to any of you who like to travel.  Traveling is, I think, the most eye-opening experience out there, and the natural world is full of beautiful, stunning, awe-inspiring places to visit.

And lots of really incredible ducks.
Posted by Gordon Bonnet at 3:54 AM