Burn your way to better health

At what point does a publication become so filled with dangerous misinformation that the powers-that-be should step in and shut it down?

I'm all for freedom of speech, and everything, and definitely in favor of people educating themselves sufficiently that they won't fall for ridiculous bullshit.  But still: the media has a responsibility to police themselves, and failing that, to have the rug pulled out from under them.

If such a line does exist -- and I am no expert in jurisprudence who could state the legality of such a move -- then the site Natural News has surely crossed it.  They have become the prime source of bogus "health news," promoting every form of medically-related lunacy, from detox to homeopathy to herbal cures for everything from cancer to depression.

Take a look at their latest salvo, entitled, "What They Won't Tell You: The Sun Is a Full-Spectrum Medicine That Can Heal Cancer."  In it, author Paul Fassa tells us that contrary to conventional wisdom, you are not putting yourself at risk by exposing your skin to the sun; you are giving yourself "healing medicine."  "Truth is," Fassa writes, "we've been systematically lied to about the sun and skin cancer for years...  How many know that there is no definitive proof that the sun alone causes skin cancer?"

Other than, of course, this exhaustive report from the National Cancer Institute. 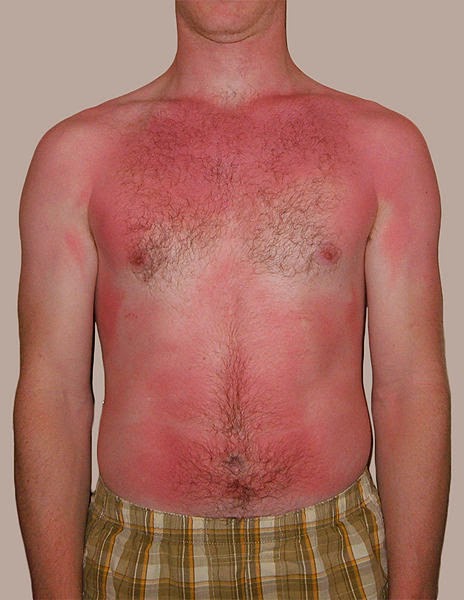 He quotes a "naturopathic doctor," David Mihalovic, as support:  "Those that have attempted to convince the world that the Sun, the Earth's primary source of energy and life causes cancer, have done so with malicious intent to deceive the masses into retreating from the one thing that can prevent disease."  Righty-o.  So let me respond with a quote of my own, from the Wikipedia page on "naturopathy:" "Naturopathic medicine is replete with pseudoscientific, ineffective, unethical, and possibly dangerous practices...  Naturopathy lacks an adequate scientific basis, and it is rejected by the medical community...  The scope of practice varies widely between jurisdictions, and naturopaths in some unregulated jurisdictions may use the Naturopathic Doctor designation or other titles regardless of level of education."

What is as certain as anything can be in science is the connection between blistering sunburns, especially in children, and later incidence of melanoma, the most deadly kind of skin cancer.  (Here's one source that lays it out pretty explicitly.)  Instead, Natural News is promoting a combination of misinformation, outright error, and paranoia so extreme that as I read the article I kept wondering if I was reading something from The Onion.  "The reality is that the vast majority of people, including doctors, have been duped into believing the myth that the sun is toxic, carcinogenic and a deadly health hazard," Fassa writes.  "That's why most people slavishly and lavishly slather toxic sunscreens on their skin whenever they anticipate direct contact with the sun's rays.  But in fact, most conventional sunscreens are cancer-causing biohazards.  Meanwhile, the multi-billion-dollar cancer industry and the billion-dollar toxic sunscreen industry are making hay with this hoax."

I think this was the point that my blood pressure rose to dangerous levels, because I am absolutely sick unto death of people yammering about the evils of Big Pharma and Big Medicine as if they were some kind of Illuminati-based death cult.  Could the medical system in the United States be reformed and improved?  Of course.  Is it an evil institution that is trying to make us all sick so as to keep itself in business?  Come on.  We are, right now, one of the healthiest societies the world have ever seen.  Our longevity and quality of life have risen steadily.  On a more personal level, I owe my life to "Big Pharma;" if my mother had not been given the RhoGAM injection when she was pregnant with me, I would almost certainly be dead of Rh-incompatibility syndrome...

... like my older sister, who was born before "Big Pharma" developed the injection, and who only lived ten days.

On some level, of course, this all falls under caveat emptor.  If you are sufficiently ignorant, gullible, or paranoid that you buy what sites like Natural News are selling, then sucks to be you.  The government, I suppose, is not in the business of protecting people from their own stupidity.  But at the same time, that isn't honestly a very ethical position, and there's part of me -- free speech be damned -- that would love it if there was a way for some kind of media watchdog to step in, and shut down what has become a conduit not only for bullshit, but for dangerous (possibly deadly) misinformation.
Posted by Gordon Bonnet at 5:14 AM