If I was asked, "What is the most important rule to follow in every situation in which you interact with your fellow humans?", I would respond, "Always be more compassionate than you think you need to be."

The inward emotion of empathy, and its outward expression of compassion, are what keep us from acting on our baser instincts -- anger, envy, lust, greed.  And compassion starts with "what would I feel in his/her place?"

However I rail against the religious at times, this principle is foundational to most of the world's religions.  Consider the passage from the Gospel of Mark, chapter 12:

Which is pretty unequivocal.  And while I (understandably) question the first part, I think the second is spot on.  The Muslim tradition says likewise, in the hadith (collected stories of Mohammed).  Check out this passage from Kitab al-Kafi, volume 2:


A Bedouin came to the prophet, grabbed the stirrup of his camel and said: O the messenger of God!  Teach me something to go to heaven with it.  Prophet said: “As you would have people do to you, do to them; and what you dislike to be done to you, don't do to them.  Now let the stirrup go!  This maxim is enough for you; go and act in accordance with it!”

I find it curious how so many of the hyperreligious remember the first bit -- about loving god -- and conveniently forget about the second.  In Islam, it is that spirit that drives the homicidal madmen in ISIS, who in Iraq are currently butchering anyone who doesn't meet their standards of holiness.  Likewise Boko Haram in Nigeria.

Nearer to home, the inability to feel empathy and act with compassion takes a different and subtler guise, but still often cloaked under a veneer of piety.  Take, for example, what Rick Wiles, host of End Times Radio, said about the Ebola epidemic:


Now this Ebola epidemic can become a global pandemic and that’s another name for plague.  It may be the great attitude adjustment that I believe is coming.  Ebola could solve America’s problems with atheism, homosexuality, sexual promiscuity, pornography and abortion.

Really?  Your God of Mercy is going to visit a plague upon us, wherein we die in agony while bleeding from every orifice, just to teach us a lesson about sexual purity?

And lest you think that this is just one lone voice with no credibility, Wiles said this immediately before interviewing Representative Frank Wolf (R-VA).

Then there's John Hagee, founder and senior pastor of the Cornerstone Church in San Antonio, who says that it's "god's position" that if you don't work, you should starve to death:

America has rewarded laziness and we’ve called it welfare.  God’s position is that the man who does not work shall not eat.

Interesting.  I thought it was "god's position" that it was easier for a camel to go through the eye of a needle than it was for a rich man to enter heaven (Matthew 19:24).  Oh, and there's the whole "give everything you have to the poor and follow me" thing, too.  (Luke 12:33).

Inconvenient, that.  Much easier to cherry-pick passages you'd rather rant about, such as the ones about homosexuality, and forget about the ones that might force you to change your lifestyle.  (Hagee's net worth, by the way, is estimated at five million dollars.)

It doesn't stop there, however.  Ultra-religious Texas Representative Louie Gohmert, who self-righteously shoves his Christian beliefs down people's throats at every turn, showed his true colors with regards to the refugee children from Central America now in camps on the US/Mexico border:


I’m hoping that my governor will utilize Article 1, Section 10, that allows a state that is being invaded — in our case more than twice as many just in recent months, more than twice as many than invaded France on D-Day with a doubling of that coming en route, on their way here now under Article 1, Section 10, the state of Texas would appear to have the right, not only to use whatever means, whether it’s troops, even using ships of war... they’d be entitled in order to stop the invasion...

Many of the children who are coming across the border also lack basic vaccinations such as those to prevent chicken pox or measles... we don't know what diseases they could be bringing in.

And that brings up yet another bible quote, from Matthew Chapter 25, which these people also conveniently forget:


Then He will also say to those on His left, ‘Depart from Me, accursed ones, into the eternal fire which has been prepared for the devil and his angels; for I was hungry, and you gave Me nothing to eat; I was thirsty, and you gave Me nothing to drink; I was a stranger, and you did not invite Me in; naked, and you did not clothe Me; sick, and in prison, and you did not visit Me.’  Then they themselves also will answer, ‘Lord, when did we see You hungry, or thirsty, or a stranger, or naked, or sick, or in prison, and did not take care of You?’  Then He will answer them, ‘Truly I say to you, to the extent that you did not do it to one of the least of these, you did not do it to Me.

I try not to be self-righteous myself.  I know I'm not as compassionate as I could be, that I fail, like all human beings fail, to reach the standards I set for myself.  And I need no god to tell me how to act, nor to let me know when I've fallen short.  But I do know that I am not a hypocrite, wielding a Bible or a Qu'ran in one hand and using the other to strike out at minorities, refugees, the oppressed, and people who don't believe as I do.

The whole thing brings to mind another quote, this time from Stephen Colbert, and it seems a fitting way to end: 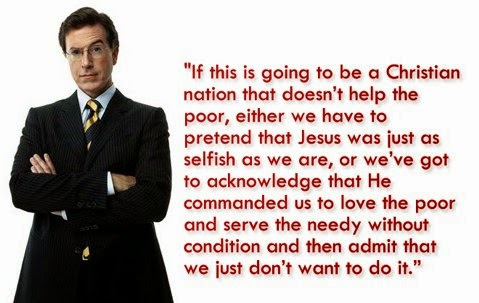