I find myself wondering, sometimes, how people can hear claims without the "Oh, come on, now" reaction kicking in.

The thought occurs to me pretty much any time I turn on the History or Discovery channels, these days, what with their dubious editorial decision to jettison actual history and science in favor of Ancient Aliens, Squatch-Chasing, and the Prophecies of Nostradamus.  In fact, I want to say, "Oh, come on, now," to Giorgio Tsoukalos before he even opens his mouth.

But evidently, that reaction doesn't occur in everyone.  I'm not certain why the World of Woo-Woo, with its pseudoscience and crazy claims and superstition, appeals so strongly to some folks.  I've always preferred science over guesswork and wishful thinking, but I appear to be amongst the minority.

Take, for example, the bizarre little story that appeared in the West African Daily Post, which claimed -- with all apparent seriousness -- that a local warlock was changing children into cats. 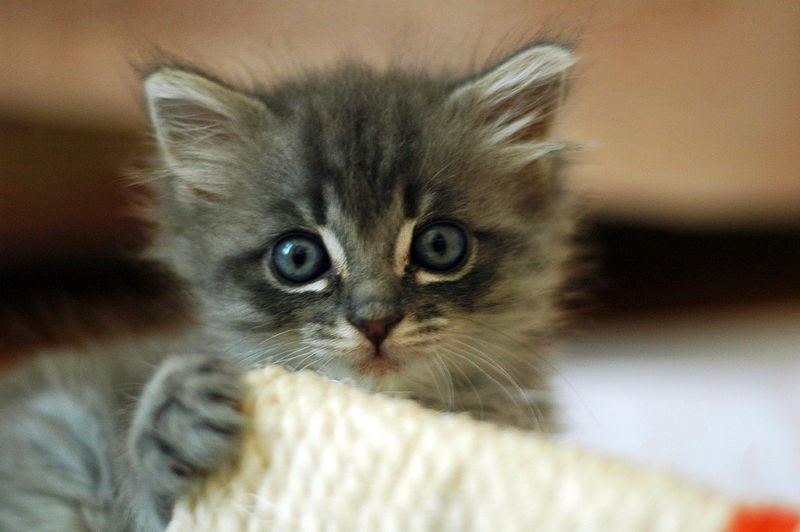 [image courtesy of photographer Nicolas Suzor and the Wikimedia Commons]

"Detectives at the Rumuolumeni Divisional Police Station in Port Harcourt, Rivers State are investigating a case involving three persons who allegedly transformed to cats," the story begins, which at least made me glad about the fact that they used the word "allegedly."

The police at Rumuolumeni Station apparently noticed that a particular cat kept running in front of the police station, as cats are wont to do.  But for some reason, they thought this was odd, so they "lay in ambush" for the cat.

Must have been a slow crime day, there at Rumuolumeni Station.

Be that as it may, they caught the cat and decided to kill it, but before they could do so, "it mysteriously transformed into... a twelve-year-old boy."

The remainder of the story is best told in the words of the reporter who wrote the article:

The twelve year old boy later confessed that he was initiated by one aged man named Womadi, adding that there are many of his kind in Port Harcourt, and their mission was to suck human blood and inflict their victims with diseases.

The paramount ruler of Rumuolumeni in Oibio-Akpor Local Government Area of Rivers State, Eze Ndubueze Wobo confirmed the transformation of three members of his community into cats.

Eze Wobo told the Daily Post that one of the men, who is popularly called Papa, confessed to him at the police station that he initiated the people to suck human blood and inflict their victims with diseases.

Wobo said the victim listed some items which would be used to cleanse initiated children, some which include native alligator pepper, Local gin, Local kola nut and so on.

"Papa" later told police that he had initiated the children using a "packaged beef roll."  About which initiation I was glad the article gave no further details.

I find it amazing, and troubling, that people could read this without their thinking at some point, "This can't be true."  (For me, it happened halfway through the first sentence.)  But they don't, for some reason.

And the darker side of all of this is the rise of a violent strain of Pentecostalism in this part of the world, which was already home to one of the most viciously fanatical religious groups in the world, the Boko Haram movement of Islam.  So we can laugh at these superstitious folks, over here in our safe homes in the industrialized world, but over there, an accusation of witchcraft is a life-or-death matter. 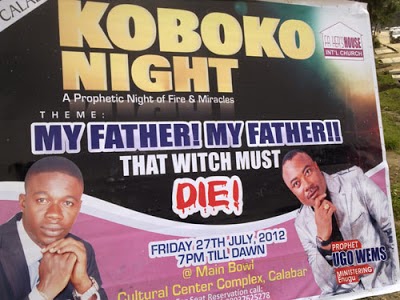 I sometimes get asked why I rant about what seem like "harmless superstitions," and why I'm so insistent that rationalism and evidence-based understanding are the best ways of approaching the world.

My answer is that superstitions are seldom harmless.  They teach you that the world is a fearful place, behaving by rules that are fluid and mystical, with competing powers that are dangerous, perhaps deadly.  Superstitions lead some people to give their money to charlatans, which on one level falls under the rule of caveat emptor; but worse than that, it causes people to cede their personal power and responsibility to individuals and causes that have little regard for human life and dignity.

On that basis alone, there is no reason to tolerate superstitious belief.  And that includes its being given serious reporting in a national newspaper.
Posted by Gordon Bonnet at 4:29 AM