Sometimes I run into claims that I don't consider Skeptophilia-worthy.  Most of these are websites that posit worldviews that are clearly the creation of lunatics, and as such, are hardly noteworthy.  As I've said more than once, any nut with a computer can launch a website; having one doesn't mean that what you're saying is correct, scientific, or even necessarily sane.

Such was the case, I thought, with the site The Wild Heretic.  It seemed, at first, to be the voluble outpourings of someone who, to put not too fine a point on it, had a screw loose.  Reading his writing, I kept shaking my head, thinking he was a lone wingnut, and as such fell into the "more to be pitied than censured" category -- and that no one could possibly take what he was saying seriously.

Until I read the comments section.

I know, I know.  Normal, intelligent people should never read the comments section, because to do so leaves you the impression that 1.5 million years of human evolution has left your average Homo sapiens with the IQ of a peach pit.  But despite that, I threw caution to the wind, and surged on ahead, pessimism about my species be damned.

And there were comments.  Lots of them.  Turns out people love the stuff on The Wild Heretic.  Take, for example, his claims on his post, "There is Glass in the Sky," wherein we find out that the ancients were right; space isn't a near-vacuum.  The Earth actually is surrounded by crystal spheres. 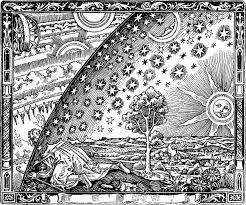 The Flammarion engraving (1888) [image courtesy of the Wikimedia Commons]

Here's a sample from the post itself, so you can get the flavor:


The nose cone and front edges of the wings of the space shuttle are made of reinforced carbon-carbon; not used anywhere else on the vehicle (but also employed for the nose cones of intercontinental ballistic missiles).  Reinforced carbon-carbon is carbon fiber in a matrix of graphite. The carbon fiber gives it a tensile strength of 101 ksi and also makes it less brittle than the heat resistant tiles on the rest of the shuttle.  Compare this to the roughly 65 ksi strength of aluminum which constitutes the shuttle’s frame, or the paltry 0.013 ksi of the Li-9000 ceramic tiles on the underbelly.  It also doesn’t crack at extreme temperatures (up to 2000 °C).

Why are the nose cone and wing edges super-strengthened since there is nothing up there but a few atoms of gas?  Re-entry perhaps?  Firstly, there is hardly any atmosphere at that altitude whether going up or coming down which also opens a new can of worms regarding why the space shuttle should heat to 1650 °C when there is so little air in the upper atmosphere.

There can be only one reason why the shuttle is reinforced at its nose and front wing edges: it must hit something hard at some point on its way up.  And looking at the numerous footage from balloons being sent into the stratosphere, we can see only black, which must mean this material is both hard and transparent.

The only hard and transparent materials we have is glass or plastic, and glass is usually a lot more brittle than plastic, which it would need to be for the shuttle to break through.  We will also see later that it is glass rather then plastic which is in the sky...

At what temperature does glass (silicon dioxide) melt? You guessed it… 1600 °C.  This is why the underbelly of the space shuttle has to reach 1650 °C in order to melt the glass underneath, so it can fall through and re-enter.

At this point, I honestly thought the guy was kidding, and that this was a spoof site.  Sadly, it appears that it isn't.  He goes on to give "evidence" in the form of glassy meteorites (tektites) that, he claims, have fallen from the crystal spheres, rather in the fashion of the can light falling from the dome at the beginning of The Truman Show.  He also claims that auroras are caused by light from ionized oxygen released by the glass (silicon dioxide); that obsidian, fused sandstone from meteorite impacts, and fulgurites (melted and refrozen sand caused by lightning strikes) are actually more chunks of the crystal spheres fallen out of the sky; and that the sudden rise in temperature in the thermosphere (the layer of atmosphere above the ionosphere is because that layer is above the crystal sphere, and therefore "absorbs the infrared rays from the sun."

So there I am, reading this, and still thinking, "At least no one will believe this guy, right?"

Then I got to the comments.

Here are just a few, representing the number I could read before the cells in my prefrontal cortex started begging for mercy:


Please bear in mind how we have been brainwashed into believing false things via the ancient Solar Cult who want us to believe in aliens and that we a just a drop in the ocean of a trillion light year Universe via the Disney productions of NASA.  Follow the propaganda and fakery rather than the money.

Fascinating thoughts/work here.  I spent most of yesterday reading and much of the night waking up with questions.  This all puts a whole new spin on Prison planet and the Earth is quarantined theories.  This glass ceiling is another sphere within the Earth sphere, right?

Maybe the rainbow (sunbow) is just too obvious a result of the glass sky for educated people to accept, along with the embarrassment associated with it for overlooking it.  And birefringence, well, I wonder how you’d explain the offset displacement of the quadruple rainbows without a birefriengent glass material.

There’s no need to hold up a dome.  The dome rests on the atmosphere as a final ice build of helium and other light elements in a sort of fully expanded sort of dormant state, which is the reason it became ice, anyway.

It’s a ground build up of super dense matter that expands from the bottom to the top in a push on push motion.  There is no pull, except in the word we use to view what we see as pull. The truth is, nothing pulls – it pushes.  No gravity needed.  Gravity simply does not exist.

And don't even get me started about The Wild Heretic's next post, wherein he considers the possibility that the Moon, stars, and planets are "mirages," and the Sun is an "artificial construct."  The name of the post?

I don't find it that bothersome that this guy obviously has no background in atmospheric science, astronomy, physics, or geology, and yet feels driven to expound upon them as if he actually knew what he was talking about.  I'm not even that upset by his pointing the conspiracy-theory-finger at NASA and the rest of the scientific community; how else is he supposed to bolster his zero-evidence theories if he doesn't claim that the rest of the world of science is in league against him?

What does bother me is that he has a following.  No, "bother" is the wrong word; "amaze" is closer to the mark.  Can it really be that there are this many people out there who reject all of science, and who think that the crystal-spheres-cadre from the 15th century are actually the ones who got it right?

But then I thought about the creationists, who believe that a bunch of Bronze-Age sheepherders had a better take on the origins of life, the universe, and everything than the best minds of the 21st century.

And suddenly it didn't seem so amazing any more.
Posted by Gordon Bonnet at 4:15 AM