What the fruit flies actually say

It's common practice to use quotes from experts to support an argument.  I do it, in nearly every post. But the problem is that if you are only looking at a clipped quote from a larger piece, you may not be getting the whole story.

And sometimes the person using the quote intends exactly that.

I ran into an especially good example of that yesterday, in the goofy creationist website Pathlights -- more specifically, on the page entitled "Fruit Flies Speak Up!"  In this bizarre little piece, the author claims that fruit fly research conclusively disproves evolution, because "After decades of study, without immediately killing or sterilizing them, 400 different mutational features have been identified in fruit flies.  But none of these changes the fruit fly to a different species." 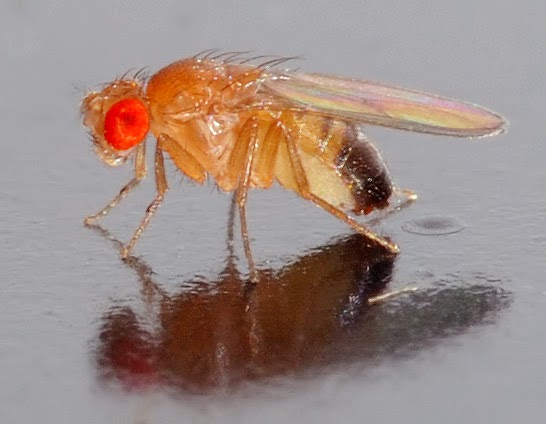 Notwithstanding that the author evidently doesn't understand even the rudiments of evolutionary biology, what interested me more was the collection of quotes he used to support his point.  Some of them, for obvious reasons, came from creationist writings:
So far, nothing too surprising here.  Of the other quotes, the first thing that jumped out at me was that the ones from scientists and thinkers of high repute were all old.  Like, really old.  There was a quote from Richard Goldschmidt from 1952, ones from Maurice Caullery and Theodosius Dobzhansky from 1964.  What, you can't find any quotes under fifty years old from reputable scientists to support your contention?

And even those old quotes are misinterpreted or taken out of context.  For example, let's look at the Dobzhansky quotes.  If Theodosius Dobzhansky actually said something that shot down evolution, it would be astonishing; he was one of the founders of the modern evolutionary model, and in fact his most famous quote is, "Nothing in biology makes sense except in the light of evolution."  So let's see what quotes the author did choose.  Here's the first one:

The clear-cut mutants of Drosophila, with which so much of the classical research in genetics were done, are almost without exception inferior to wild-type flies in viability, fertility, longevity.  (Theodosius Dobzhansky, Heredity and the Nature of Man (1964))

Well, duh.  The scientists who conducted the experiments were doing artificial selection -- i.e., selecting the mutant strains because they were interested in the phenotypic expression of the mutation.  Put a different way, they were not selecting the flies for fitness, which is what happens in natural settings.  Just as artificial selection in dogs has resulted in breeds with poorer fitness than "wild-type" dogs -- predisposition to diseases like hip dysplasia being a well-studied example -- there is no evolutionary biologist in the world who would expect that what is being done in labs that study Drosophila is going to produce populations with higher fitness than the wild-type flies that have been naturally selected for survival for millennia.

Most mutants which arise in any organism are more or less disadvantageous to their possessors. The classical mutants obtained in Drosophila usually show deterioration, breakdown, or disappearance of some organs.  Mutants are known which diminish the quantity or destroy the pigment in the eyes, and in the body reduce the wings, eyes, bristles, legs.  Many mutants are, in fact lethal to their possessors.  Mutants which equal the normal fly in vigor are a minority, and mutants that would make a major improvement of the normal organization in the normal environments are unknown.  (Theodosius Dobzhansky, Evolution, Genetics, and Man (1955))

The author of the site is using this to claim that mutations are always bad, but read Dobzhansky's quote and you will find him using words like most, more or less, usually, many, a minority.  Read critically, you will see that Dobzhansky clearly knew about neutral variation, which are traits that confer neither an advantage nor a disadvantage to the individual.

In fact, let's look at a different Dobzhansky quote, that demonstrates the point rather clearly:


The data reported in the present article have a bearing on the problem of selection, even though they involve no selection experiments in the usual sense of the term.  Some of the chromosomes obtained through crossing over between the three ancestral wild chromosomes have properties very dif- ferent from the latter.  It is, therefore, possible to “select” products of recombination of the gene complexes that deviate greatly from the ancestral types, being completely outside the limits of variability of these ancestors.  (from "The Genetics of Natural Populations," Genetics, May 1946)

Dobzhansky was no doubter of evolutionary theory.  He simply knew enough about genetics to understand that artificially-induced, artificially-selected mutations were unlikely to improve fitness, and that much of the variation you see in nature is due to recombination.

Most interesting is a quote from Jeremy Rifkin's book Algeny.  Rifkin himself is an economist and social activist, so right away you have to wonder why his word on evolutionary genetics should be authoritative.  But here it is:


Even with this tremendous speedup of mutations, scientists have not been able to come up with anything other than another fruit fly.  Most important, what all these experiments demonstrate is that the fruit fly can vary within certain upper and lower limits but will never go beyond them.  For example, Ernst Mayr reported on two experiments performed on the fruit fly back in 1948.

In the first experiment, the fly was selected for a decrease in bristles and, in the second experiment, for an increase in bristles.  Starting with a parent stock averaging 36 bristles, it is possible after thirty generations to lower the average to 25 bristles, "but then the line became sterile and died out."  In the second experiment, the average number of bristles were increased from 36 to 56; then sterility set in.  Mayr concluded with the following observation: Obviously any drastic improvement under selection must seriously deplete the store of genetic variability...  The most frequent correlated response of one-sided selection is a drop in general fitness.  This plagues virtually every breeding experiment.  (Jeremy Rifkin, Algeny (1983))

Once again, we have the same three problems; confusing artificial with natural selection, ignoring the effects of recombination on variation, and using words like "most frequent."  And it must be said that when Algeny was published, it was roundly trashed by the scientific community.  Stephen Jay Gould reviewed it thusly:


I regard Algeny as a cleverly constructed tract of anti-intellectual propaganda masquerading as scholarship. Among books promoted as serious intellectual statements by important thinkers, I don't think I have ever read a shoddier work.  Damned shame, too, because the deep issue is troubling and I do not disagree with Rifkin's basic pleas for respecting the integrity of evolutionary lineages.  But devious means compromise good ends, and we shall have to save Rifkin's humane conclusion from his own lamentable tactics.  (Discover, January 1985)

Ouch.  Given Gould's stature in the scientific community, I think that puts Rifkin and Algeny into perspective.

So the original post on Pathlights was disingenuous at best.  Illustrating the unsurprising point that if you cherry-pick your quotes, you can support damn near anything.  Which, ironically, is exactly what the fundamentalists do with their own favorite source, the bible -- insisting that we interpret literally the creation story and Noah's ark and prohibitions against homosexuality, while simultaneously ignoring things like the kosher laws and rules spelling out how you can beat your slaves and mandates to stone disobedient children.

No particular shock, I suppose, that they do the same thing to other sources.  But it does call into serious question their intellectual honesty, doesn't it?
Posted by Gordon Bonnet at 5:09 AM