A chat with grandma

I frequently find myself wondering why people are more willing to believe folksy anecdote than they are sound scientific research.

I ran into an especially good example of that yesterday, over at the website Living Whole.  This site bills itself as "a landing spot for all things parenting, common sense, and healthy living," so right away it sent up red flags about veracity.  But the article itself, called "I Was Told To Ask the Older Generation About Vaccines... So I Did," turned out to be a stellar example of anti-science nonsense passed off as gosh-golly-aw-shucks folk wisdom.

In it, we hear about the author's visit to her hundred-year-old great-grandma, who still lives in her own house, bless her heart.  But we're put on notice right away what the author is up to:


I’m not sure why people in my family live so long.  It could be the organic diet, the herbs, or the fact that all of my century-old relatives are unvaccinated.  If my grandmother dies in the near future, it will only be because she’s started eating hot dogs and no one has told her that hot dog is mystery meat.  Do they make a vaccine for that?

Or it could be, you know, genetics.  As in, actual science.  My own grandma's family was remarkably long-lived, with many members living into their 90s, and my Great-Aunt Clara making it to 101.  More on them later.

We then hear about how her grandma got chicken pox, mumps, and German measles, and survived 'em all.  So did bunches of the other family members she knew and loved.  The author says;


Mumps, measles, whooping cough, chicken pox, and even the flu were rights of passage that almost every child experienced which challenged and groomed the immune system and protected them from more serious diseases as adults.  Deaths from these diseases were rare and only occurred in the really poor children who had other “things” as well.

Like my two great-aunts, Aimée and Anne, who died of measles five days apart, ages 21 and 17, and who were perfectly healthy up to that time.

Hopefully this last-quoted paragraph will shoot down the author's credibility in another respect, though.  How on earth does surviving mumps (for example) "groom your immune system" to fight off other diseases?  Any of my students from high school introductory biology could explain to you that this isn't how it works.  Your immune response is highly specific, which is why getting chicken pox only protects you against getting chicken pox again, and will do bugger-all for protecting you against measles.  And sometimes it's even more specific than that; getting the flu once doesn't protect you the next time.  The antibody response is so targeted that you are only protected against that particular flu strain, and if another crops up, you have to get revaccinated -- or get sick.

Then, there's the coup-de-grace:


In the last decade I have had to explain to my grandmother what Crohn’s disease is, autism, type 1 diabetes, rheumatoid arthritis, ADHD, peanut allergies, and thyroid conditions.  She never saw those health conditions growing up. “Vaccine preventable diseases” were replaced with “vaccine-induced diseases.” Can we even compare chicken pox to rheumatoid arthritis?

No.  No, you can't.  Because they have nothing to do with one another.

But you know why great-grandma didn't know about all of those diseases listed?  Because there was no way to diagnose or treat them back then.  Kids with type-1 diabetes simply died.  Same with Crohn's.  (And that one is still difficult to manage, unfortunately.)  Autism has been described in medical literature since at least the 1700s, and thyroid conditions long before that.  So sorry, but this is just idiotic. 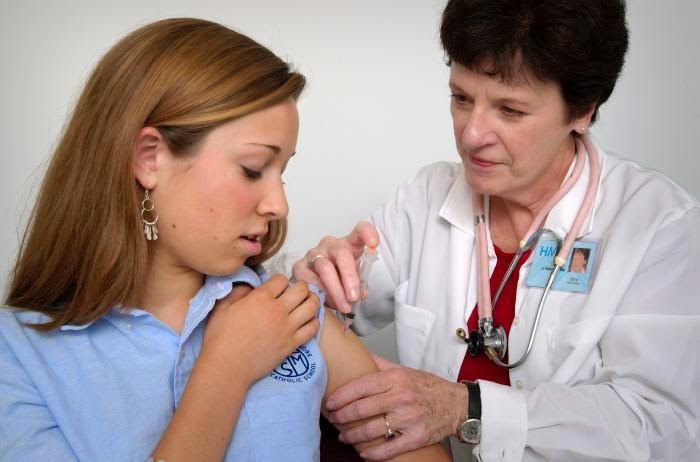 Let me point out what should be the most obvious thing about all of this, but which seems to have escaped the author entirely: your great-grandma's reminiscences aren't relevant.  Neither is the survival of my own grandmother, and many of her brothers and sisters, into old age.  You know why?  Because it would be a little hard to have a friendly chat with the tens of thousands of people who did die of preventable childhood diseases, like my grandma's brother Clarence (died as an infant of scarlet fever) and sister Flossie (died as a teenager of tuberculosis).  Of course the survivors report surviving.

Because they survived, for fuck's sake.  What did you think she'd tell you?  "I hate to break it to you, dear, but I actually died at age six of diphtheria?"

But that didn't seem to occur to most of the commenters, who had all sorts of positive things to say.  Many said that they weren't going to vaccinate their children, and related their own stories about how their grandparents had survived all sorts of childhood diseases, so q.e.d., apparently.

I'm sorry.  The plural of "anecdote" is not "data."  There is 100% consensus in the medical community (i.e. the people doing the actual research) that vaccines are safe and effective, serious side effects are rare, and that leaving children unvaccinated is dangerous and irresponsible.  You can go all motive-fallacy if you want ("of course the doctors say that, it keeps them in business"), but it doesn't change the facts.

But unfortunately, there seems to be a distinct anti-science bent in the United States at the moment, and a sense that telling stories is somehow more relevant than evaluating the serious research.  Part of it, I think, is laziness; understanding science is hard, while chatting about having tea with great-grandma is easy.

I think it goes deeper than that, however.  We're back to Isaac Asimov's wonderful quote, aren't we?  It seems a fitting place to end. 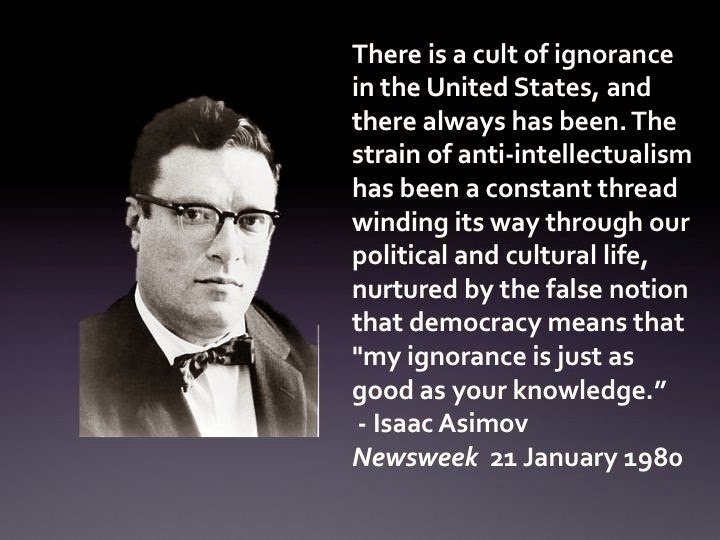