In the latest news from the Unparalleled Chutzpah department, we have a witch hunter from Nigeria who is suing the British Humanist Association for half a billion pounds.

Helen Ukpabio, founder of Christian Liberty Foundation Gospel Ministries, calls herself "Lady Apostle."  She claims to fight the "spirits of evil," including "gnomes, the witchcraft spirits in charge of the earth."  Ukpabio was targeted by the BHA especially for her exorcisms performed on little children.  "A child under the age of two," she writes, "possessed with black, red and vampire witchcraft spirits... screams at night, cries, is always feverish, suddenly deteriorates in health, puts up an attitude of fear, and may not feed very well."

And such a child, Ukpabio says, may be a witch.  Not, apparently, just a sick toddler, behaving as sick toddlers do, and (most importantly) needing help from a qualified doctor. 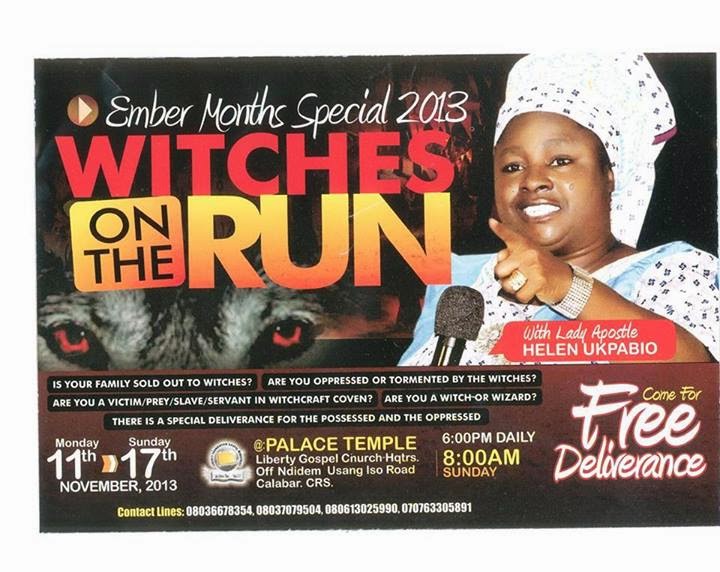 The BHA, and a superstition watchdog agency, the Witchcraft and Human Rights Information Network, have been urging the British government to ban Ukpabio and others like her from entering the United Kingdom.  Gary Foxcroft, executive director of the WHRIN, says:


This latest court case is the latest in a long line of unsuccessful legal actions that Helen Ukpabio has pursued against me and other human rights activists.  Previous cases were thrown out of court in Nigeria but this time she is looking to take action in a UK court.  I have no doubt that a judge in the UK will reach the same conclusion as those in Nigeria.  Of course, the real question here is whether our government should allow hate preachers such as Helen Ukpabio to enter the UK.  Since her teachings have been linked to widespread child abuse in reports by the UN and various other bodies it would appear that this may not be in the public interest.  This case also therefore provides the Home Secretary and the National Working Group to Tackle Child Abuse Linked to Faith and Belief with a great opportunity to condemn the practices of such pastors, take concrete action and ensure that justice is served.

Which is exactly the right approach.  But now Ukpabio is dragging the BHA into court, claiming that they have committed libel and defamation, and have damaged her reputation by making false claims about her beliefs.  And even if she loses her lawsuit, the BHA will be saddled with the legal costs of defending itself against her claims, costs it can ill afford to bear.

But the case also brings up the awkward question of where to draw the line regarding the religious indoctrination of children in other venues.  Consider, for example, "Jesus Camp," the documentary film about a Charismatic Christian children's summer camp near Devil's Lake, North Dakota.  If you haven't seen the film, you should; it's simultaneously fascinating and highly disturbing.  After watching it, it's hard to think of this sort of thing as anything other than brainwashing.

In other words, emotional abuse.  Which accusation should also be leveled at the Muslims for their practices of child marriage and female genital mutilation.

The threat to "identified witches" in Nigeria, however, is most serious of all, because these children are often killed outright for their "witchcraft."  Leonardo Rocha dos Santos, director of the human rights organization Way to the Nations, says:


Over the past four years, since I've been involved in the rescue mission of the falsely branded children as witches, the number of tortured and killed children has not decreased.  I've seen many cases, and some very dramatic ones.  We are present with our rescue work only in one of the three Nigerian states, the one with the Christian population.  The so-called witch children are tortured and killed also in Cameroon and Angola, and the UNICEF report calls the situation in Congo as critical.  Some international organizations are talking about thousands of stigmatized children. I have met at least 400 cases of tortured, abandoned or killed children.  Only two months ago we rescued four children who were to be murdered together, at the same time.

And about Helen Ukpabio, he minces no words:

The problem has really escalated since 1999 when Helen Ukpabio produced a horror movie, End of the Wicked.  The movie and her exorcism "ministry" have provided a leading inspiration for many deaths of children in Nigeria and surrounding countries.  She is at this time visiting the U.K.  If I were to speak publicly, or in churches in the U.K. or U.S. teaching how to make bombs I would be arrested immediately because bombs kill people.  Yet this woman, whose public work is turning parents into murderers of their own children, has been allowed to visit the U.K. where she is performing her deliverance séances and exorcisms on children at this moment.

Precisely.  The time has come to call out dangerous superstitions for what they are, and to stop these people from hiding behind "it's my religion."  I'm sorry: if your religion is prompting you to victimize children, you need to be stopped.  Period.


The activities of self-styled exorcists who stigmatize children as witches, vampires, or whatever, and subject them to sadistic rites of demonic expulsion, are criminal, and constitute a deep embarassment to the nation.  That their activities are carried out under a religious banner expose them as heartless cynics, playing on the irrational fears of the gullible.

To which I can only say: Amen.
Posted by Gordon Bonnet at 5:01 AM