When a new discovery in medical science is made, there's always the danger that gullible and/or hopeful people will misinterpret the results.  The danger is especially high when the discovery has to do with something simple and accessible, such as the find that trans-cranial electrical brain stimulation leads to higher cognitive function. 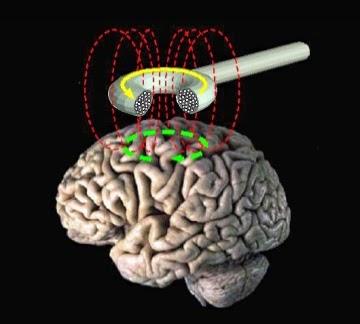 A year ago, some researchers at Oxford University found that a painless, non-invasive application of "electrical noise," delivered through electrodes attached to the scalp, improved attention, accuracy, and memory, and that the effect lasted for weeks or months.  The procedure is called TRNS (transcranial random noise stimulation), and shows great promise in helping individuals with cognitive impairment -- and perhaps even us ordinary folks who just want a boost in our thinking ability.

"Performance on both the calculation and rote learning tasks improved over the five days, and the former improvements were maintained until six months after training," study leader Dr. Roy Cohen Kadosh told reporters.  "Research has shown that by delivering electricity to the right part of the brain, we can change the threshold of neurons that transmit information in our brain, and by doing that we can improve cognitive abilities in different types of psychological functions...  Our neuro-imaging results suggested that TRNS increases the efficiency with which stimulated brain areas use their supplies of oxygen and nutrients...  Participants receiving TRNS showed superior long-term performance, compared to sham controls, six months later."

So far, pretty cool.  But of course, when a researcher discovers something like this, it opens the door for the greedy to take advantage of the gullible by creating their own electrical stimulation devices, and claiming that "research shows" that they'll help you to think better.

There's even a forum on Reddit devoted to the subject -- complete with claims that TRNS can treat everything from autism to schizophrenia.  Less publicized, though, are the accounts of people who have burned their scalps because of leaving the electrodes on too long, or using a unit that delivers a higher-than-recommended voltage.

Through all of this, there have been some voices calling for reason.  Dr. Hannah Maslin, also of Oxford, published a paper calling for regulation of these devices.  "It is becoming increasingly easy for individuals to buy brain-modulating devices online that promise to make the user’s brain work faster, or more effectively, or more creatively," Maslin writes.  "Such devices can involve passing electrical currents through one’s brain or using electromagnetic fields to penetrate the scalp and skull to make neurons fire.  Yet, when purchased outside clinical settings, these devices are unregulated, with no system in place to ensure their safety.  With the market for enhancement technologies expanding, and with devices already crossing international borders, controlling which products are approved for sale is a global issue, potentially requiring international regulatory harmonization."

Steven Novella, neurologist at Yale University, put it even more bluntly.  "Any device with medical claims that it's meant to affect our biological function should be appropriately regulated.  Regulation is the only thing that creates the motivation to spend the money and take the time to do the proper research."

Of course, I'm expecting that this will bring howls of anger from the alternative-medicine crowd, who get their jollies claiming that the medical establishment is actively trying to keep us all sick so that they can make more money.  The truth, of course, is that regulation is about protecting people from their own ignorance.  TRNS does show great promise in improving memory and cognition -- but putting those devices in the hands of people who don't know how to use them correctly is asking for trouble.

So if you're tempted by the hype, my advice is to put away your credit card and read some of the actual research.  It may be that eventually TRNS units will be available for use for ordinary folks, but right now they're (rightfully) in the hands of the medical researchers.  Heaven knows I'd like to think more clearly; but I'm not going to cave in to that desire and end up burning a hole in my scalp.

Call me a Nervous Nellie, but I'm just going to err on the side of caution in this instance.
Posted by Gordon Bonnet at 5:32 AM