In the latest from the Bizarre Religious News department, we have word that Catholic exorcists in Italy are being told to take it easy by the powers that be.

The Archbishop of Florence, Cardinal Giuseppe Bertori, has become concerned that priests are conducting too many exorcisms.  There's a danger, Bertori said, that some of the purported possessed actually are suffering from conventional mental illnesses, and would be better off consulting a psychiatrist than a priest. 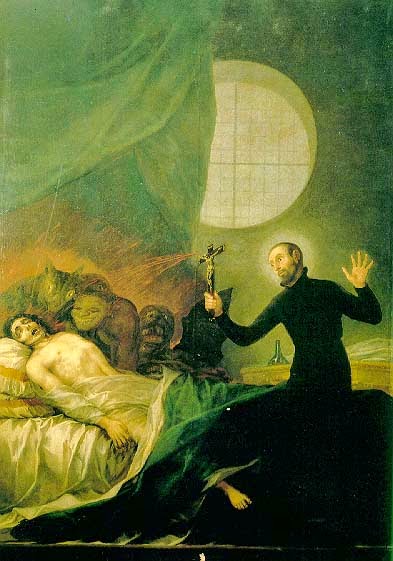 Well, yeah, I'd agree, especially if you substituted the word "all" for "some."  But Bertori obviously still thinks that the whole demonic possession thing is real, because instead of telling the Get-Thee-Behind-Me-Satan crowd simply to knock it off, he's telling them that they have to apply for and receive permission from the higher-ups before going through with it.

This strikes me as simultaneously appalling and hilarious.  Because if bureaucracy is good at anything, it's dragging its feet.  Can you see the problem here?


Italian church member:  Father, you need to come conduct an exorcism on my wife.  She froths at the mouth whenever anyone near her says a prayer, can't stand the sight of crucifixes, chews on the upholstery, and recently turned her head a full 360.  It's scaring the pets.

Priest:  I'll have to apply for permission.  I'll get right back to you.

*a year and a half later*

Priest:  Good news, we've got permission!  I have you on the calendar for March of 2018.  I hope that works for you.

So that could be problematic.  But Bertori et al. seem to be more worried that unauthorized exorcisms are making the church look kind of... silly.  So he's sent all the priests a manual called (I'm not making this up) "Regarding Magic and Demonology," telling them to pay special attention to the section called "Exorcisms and healing prayers… pastoral rules and recommendations."

"Some priests, with the best intentions," a Catholic spokesperson said in an interview in La Nazione, "are making themselves available to listen to these people and sometimes perform exorcisms on them in a way that is not permitted, not regular and not coordinated."

Well, the last thing we want is uncoordinated exorcisms.  And lest you think I'm simply being snide, allow me to point out that there are regular reports of people dying during exorcisms -- just this week a man in Zambia died during a ritual to expel evil spirits, in which the victim was given a poisonous liquid to drink because supposedly the demons would be poisoned, not the man.  It didn't turn out that way.  The pastor, once he realized that his ritual had killed the man he was supposed to be helping, dumped the body and is currently on the run from the law.

This sort of thing hasn't stopped the practice, nor diminished the support of many religious leaders.  And no one is more convinced than Father Gabriele Amorth, the Vatican's "chief exorcist," who claims to have expelled 70,000 demons in his 25 years of service in the position.  Keep in mind, though, that this is the same dude who thinks that yoga is "satanic," and that it "leads to evil, just like reading Harry Potter."

So we're not talking about someone with a particularly sound grasp on reality, here.

In any case, I am heartily in favor of anything the church patriarchy can do to cut back on the exorcisms being conducted by the rank-and-file.  It'd be nice if they'd abandon "magic and demonology" stuff entirely, but that's probably too much to hope for.  In the meanwhile, if you need an exorcism, you might be looking at a long wait.  I might suggest trying a good psychologist in the meantime.
Posted by Gordon Bonnet at 2:25 AM