Facts about a non-epidemic

Having participated in raising two boys who presented nothing more than the usual challenges of parenting a couple of rambunctious and strong-willed kids, I cannot begin to imagine the difficulties faced by parents of an autistic child.

Friends of mine who have children with autism spectrum disorder have told me that the experience is not without its rewards, and I am certain that it is true.  But the obstacles that those children themselves face -- not least in the realm of acceptance by the outside world -- must present their parents with a formidable and exhausting task, and one for which I have nothing but the utmost respect.

Such a diagnosis often leaves parents searching for a cause as well as a treatment, and in such periods of emotional strain people will sometimes grasp at straws.  Thus the completely discredited Andrew Wakefield "study" pinning the cause of autism on routine vaccinations.  The truth is that medical researchers still have not identified a single clear cause for autism spectrum disorder; a genetic basis is strongly suspected, with perhaps a variety of epigenetic effects contributing, along with possible environmental triggers as well.

That, of course, is still not enough for some people, and the vaccine myth persists.  It has been debunked roundly by more authoritative individuals than myself, and a quick Google search will provide you with all of the reputable information you need (and scads of specious and fear-laden pseudoscience, as well).  I want to deal with a different facet of the misinformation here -- the idea that autism rates have skyrocketed in the past few decades.

That we are in the midst of an "autism epidemic."

Such claims are rampant, and bolster the (unsupported) conjecture that autism is caused solely by some toxin in our modern lifestyle (once again, the mercury-based preservative thimerosal in vaccines is often named, although its use was discontinued in the USA and EU in 2003).  Take, for example, this article by Dan Olmstead, that not only refers to autism as an "epidemic," but claims that the "medico-industrial complex" is trying to hush the fact up.

The first problem is, Olmstead is trying to support his point using information that simply isn't true.  He claims, for example, that the first children with autism were identified in 1943, even though Houston and Frith's book Autism in History makes an excellent case that one Hugh Blair of Borgue, Scotland exhibited all of the classic symptoms of autism spectrum disorder -- way back in 1747.

But the difficulties run deeper than that.  If Olmstead and (many) others are correct, then there is not only a correlation between vaccination and other environmental toxins in the industrial west, there's also a causative link.

And a study just published in Psychological Medicine demonstrates conclusively that there isn't even a correlation.

This paper does an exhaustive analysis of the data, worldwide, of the incidence of autism in the last twenty years.  And not only does it indicate that the rates of autism haven't changed appreciably in the last twenty years -- pretty curious if it's an "epidemic" -- the incidence of autism in sub-Saharan Africa (30.0 affected children per 100,000), where very few children are vaccinated, is actually higher than that for western Europe (24.8 affected children per 100,000), where almost all children are immunized.

Kind of blows a hole in the idea of a human-induced autism epidemic being suppressed by the evil medico-industrial complex and "Big Pharma."  The authors of the study, of course, put it in more measured terms, stating, "After accounting for methodological variations, there was no clear evidence of a change in prevalence for autistic disorder or other ASDs between 1990 and 2010.  Worldwide, there was little regional variation in the prevalence of ASDs."

And if you add that to a further study that found that in places where rates of autism diagnosis have risen, diagnosis of mental retardation has fallen, the situation becomes even clearer.  Consider this graph, developed by from United States Department of Education data: 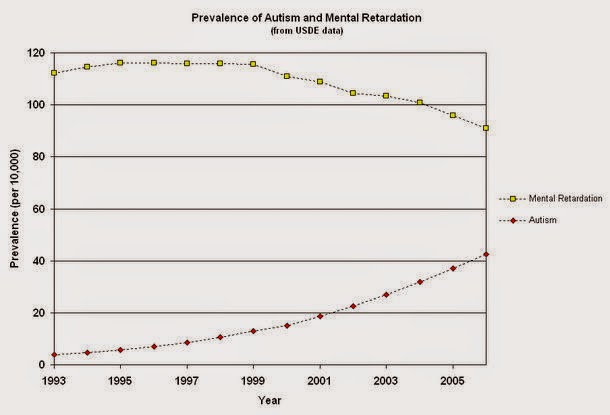 It is evident that in times past autistic children were lumped in with those who suffered from other developmental disorders -- those unfortunates who were labeled in the US Census starting in 1850 as "idiots, imbeciles, deaf & dumb, blind, or insane" and who were often institutionalized in conditions so horrible that they defy belief.

In taking issue with the people who are publicizing false information about an "autism epidemic," I am in no way trying to minimize the struggles that autistic children and their parents go through, nor am I unsympathetic with their desire to understand the cause.  But no one -- least of all the children with ASD -- are helped in any way by fear-mongering, alarmism, and conspiracy theories.

As with anything: we are always best off knowing the facts, even if those facts still leave us in a state of ignorance regarding ultimate causes.  Recent advances in identifying the genetic underpinning of autism and related disorders leave me hopeful that we may soon have answers; in the meantime, what we need is compassion and understanding for ASD children and their caregivers, and some caution about promoting spurious and unscientific theories about the disorder's origins.
Posted by Gordon Bonnet at 3:10 AM