Hearing through your skin

I first ran into David Eagleman when a student of mine loaned me his phenomenal book Incognito: The Secret Lives of the Brain.

Even considering that I have a decent background in neuroscience, this book was an eye-opener.  Eagleman, a researcher at Baylor College of Medicine, not only is phenomenally knowledgeable in his field, he is a fine writer (and needless to say, those two don't always go together).  His insights about how our own brains work were fascinating, revealing, and often astonishing, and for anyone with an interest in cognitive science, it's a must-read.  (The link above will bring you to the book's Amazon page, should you wish to buy it, which all of you should.)

I've since watched a number of Eagleman's videos, and always come away with the feeling, "This guy is going to turn our understanding of the mind upside down."  And just yesterday, I found out about a Kickstarter project that he's undertaking that certainly makes some strides in that direction.

It's widely known that the brain can use a variety of inputs to get sensory data, substituting another when one of them isn't working.  Back in 2009, some scientists at Wicab, Inc. developed a device called the BrainPort that gave blind people the ability to get visual information about their surroundings, through a horseshoe-shaped output device that sits on the tongue.  A camera acts as a sensor, and transmits visual data into the electrode array on the output device, which then stimulates the surface of the tongue.  After a short training period, test subjects could maneuver around obstacles in a room.

And the coolest part is that the scientists found that the device was somehow stimulating the visual cortex of the brain -- the brain figured out that it was receiving visual data, even though the information was coming through the tongue.  And the test subjects were sensing visual images of their surroundings, even though nothing whatsoever was coming through their eyes.

So Eagleman had an idea.  Could you use a tactile sense to replace any other sense?  He started with trying to substitute tactile stimulation for hearing -- because, after all, they both work more or less the same way.  Touch and hearing both function because of mechanoreceptors, which are nerves that fire due to vibration or deflection.  (Taste, which is a chemoreceptor, and sight, an electromagnetic receptor, are much further apart in how they function.)

Thus we have the VEST -- the vibrational extra-sensory transducer. 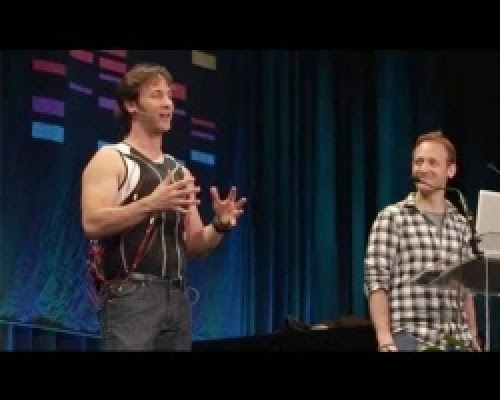 It's a vest that's equipped with a SmartPhone, and hundreds of tiny motors -- the transducer activates the motors, turning any sounds picked up by the phone into a pattern of vibrations on your upper body.  And just as with the BrainPort, a short training period is all that's needed before your can, effectively, hear with your skin.

Trials already allowed deaf individuals to understand words at a far higher rate than chance guessing; and you can only imagine that the skill, like any, would improve with time.  Eagleman writes:


We hypothesize that our device will work for deaf individuals, and even be good enough to provide a new perception of hearing. This itself has a number of societal benefits: such a device would cost orders of magnitude less than cochlear implants (hundreds-to-thousands as a opposed to tens-of-thousands), be discrete, and give the wearer the freedom to not be attached to it all the time. The cost effectiveness of the device would also make it realistic to distribute it widely in developing countries.

More exciting than this, however, is what this proof of principle might enable: the ability to feed all sorts of new and profound sensory information into our brains.

I find this sort of thing absolutely fascinating.  The brain, far from being the static and rigid device we used to believe it was, has amazing plasticity.  Given new sources of information, it responds by integrating those into the data set it uses to allow us to explore the world.  And even though the VEST is currently being considered primarily for restoration of a sense to individuals who have lost one, I (like Eagleman) can't help but wonder about its use in sensory enhancement.

What sorts of things are we missing, through our imperfect sensory apparatus, that such a device might allow us to see?

Consider giving Eagleman's Kickstarter your attention -- he's the sort of innovative genius who could well change the world.  Just what he's done thus far is phenomenal, moving us into possibilities that heretofore were confined to science fiction.

And man, do I want to try one of those vests.  I hear just fine, but still.  How cool would that be?
Posted by Gordon Bonnet at 2:51 AM