Thus far I have been challenged twice to do the ALS Ice Bucket Challenge, both times by dear friends, and I haven't done it.  I have no particular qualms about jumping on board a do-something-silly-for-charity bandwagon, and am in full support of stem cell research.  My reluctance has to do with one thing, and one thing only:

I am a wuss about the cold.

I am one of those people who starts to shiver when the thermometer drops below 65F.  This is particularly ironic given that I live in upstate New York, where the climate is such that during most of the year, you do the Ice Bucket Challenge whether you want to or not simply by going outside.  In my own defense I will state that I was born and raised in southern Louisiana, in a town that (in my dad's words) was "so Deep South that if it was any deeper, you'd be floating."  So I have the tropics, or at least the subtropics, in my blood.

But I do feel a bit guilty about not getting someone, most likely my wife, to pour ice water on my head.  I mean, it seems like the least I could do, other than donating some money to the ALS Association, which I'm gonna do anyway.  But now I'm glad I didn't participate, because I just found out that by doing the Ice Bucket Challenge...

... I am baptizing myself in Satan's name. 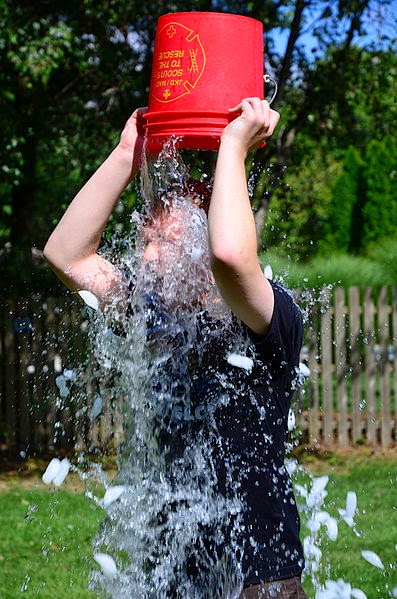 Or at least, that's the contention of a writer for the phenomenally bizarre site Before It's News, which features stories that haven't become news yet for a reason.  In this article, written by someone named Lyn Leahz, we find out that the whole Ice Bucket thing was devised by satanists, so that they can secretly steal your soul.


I recently found out about the Ice Bucket Challenge and I really didn’t pay attention to it until a good friend mentioned that an ex-satanist friend said that this is the very same ritual he did when he was a satanist and was like a covenant contract with the devil.  The enemy has come into America through the back door with what seems like a good work and a good cause but it is only on the surface.  As you dig a little deeper and take the time to research, you will see that what I am saying is true.  This is a type of sacrifice.  It is a type of satanic sacrifice...  There is definitely a spirit behind this cause and it is not the Holy Spirit...  To all those who have already participated, there is no condemnation, but there is a plea from the heart of God to pray, seek his face and ask forgiveness.

So there you go.  We also find out, through some videos that I only recommend watching after drinking a double scotch, that this is part of the Illuminati-sponsored "fire and ice challenges" that are to "purify America before the Great Sacrifice."  This comes from "evangelist Anita Fuentes," who said, and I quote: "'Now Anita,' you may be saying, 'how is this Ice Bucket Challenge related to a ritual purification before human sacrifice?'"  Which, to be honest, was nothing that I myself would ever have thought to say.  But she goes on to say that dumping water on the head is baptism, and that this means that America is being "ritually cleansed."  Why?  Because of the Illuminati, and pyramids, and the New World Order, and the Book of Revelation.  At that point, I kind of gave up, because the video is 43 minutes long, and I just don't have that kind of patience.

We also have the contention that during the moment of shock from pouring cold water on your head, demons could enter your body.  Which, you would think, would make doing the Polar Bear Swim a seriously dangerous proposition.  Not to mention the buddy of mine who owns a sauna, and in January likes to run out of the sauna bare-ass naked, do a belly flop in the snow, and "make anatomically correct snow angels."

And allow me to add, I've seen no evidence of my friend being possessed by demons.  He's a little odd, granted, but I don't think demons are at fault.

So I think the whole thing is kind of ridiculous.  If pouring ice water on your head is your idea of fun, knock yourself out.  I still may end up being guilted into doing this, depending on how much my two friends who nominated me decide to push matters.  If so, I better do it soon, because it's already getting cool up here in the Frozen North.  And no way am I pouring ice water on myself if it's below 65F.  That's just asking too much from a card-carrying wuss.
Posted by Gordon Bonnet at 2:11 AM