What amazes me about so many crazy claims is that you get the impression that the people making them didn't even try to find a natural explanation.

It's one thing to speculate wildly about a phenomenon for which science is still searching for explanations.  Déjà vu, for example, is one experience that virtually everyone shares, and for which no convincing explanation has yet been found.  It's no wonder that it's fertile ground for people who prefer to ascribe such occurrences to the paranormal.

But in other cases, there is such a simple, convincing natural explanation that you have to wonder why the claimant isn't going there.  Such, for example, is the suggestion over at the phenomenally bizarre quasi-religious site The Watchman's Cry that geographical locations on the Earth that have been the sites of disasters (natural or manmade) fall along connecting lines, making some sort of mystical, meaningful pattern. 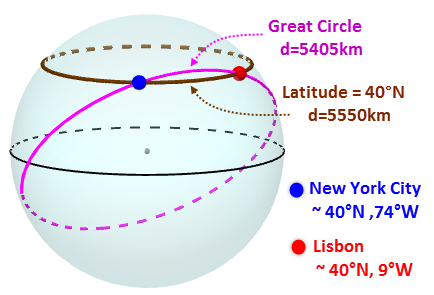 It's just ley lines all over again, isn't it?  If your search parameters are wide enough -- basically, "anywhere that anything bad has happened in the past two centuries" -- you can find great circles that link them up.  Which is entirely unsurprising.  I could draw a great circle anywhere on Earth and pretty much guarantee that I'll find three or more sites near it that had some kind of natural or manmade calamity in the past two centuries.  The Earth is a big place, and there are lots of calamities to choose from.

But what gets me most about this guy is that he doesn't even seem to understand that given the fact that the Earth is a sphere (an oblate spheroid, to be precise, but let's not get technical), a given point on Earth has an infinite number of great circles passing through it.  Just as two points on a plane define a line, two points on a sphere define a great circle.  And his lack of grasp of simple geometry becomes apparent when he tells us that it's amazing that two intersecting great circles (ones connecting Houston, Texas to train derailment sites in Rosedale, Maryland and Bear Creek, Alabama, respectively) were "only 900 feet apart."

How can you say that two intersecting lines are any specific distance apart?  If they intersect, they are (at that point) zero feet apart.  Further from the intersection, they are further apart.  Because that's how intersection works.

I'll leave you to explore the site on your own, if you're curious to see more of this false-pattern malarkey, but suffices to say that there's nothing at all mystical going on here.  He's adding geometry to coincidence and finding meaning, and it's no great surprise that it turns out to be the meaning he already believed going into it.

But that, apparently, isn't enough for some people.
Posted by Gordon Bonnet at 2:32 AM