Last year I wrote a piece on the phenomenon of people labeling themselves or their kids "Indigo Children."  An "Indigo Child," it's said, is empathetic, sensitive, creative, and tends not to fit in well with regards to other people's expectations.  They are highly intelligent, and are especially gifted in areas that require thinking outside the box.

So what we have here is yet another example of people trying to find an explanation and a label for something that really is best classified under the heading "People Are All Different."  Even, apparently, with respect to the color of their auras.

But "Indigo" is becoming passé, apparently.  As C. S. Lewis observed, "Fashions come and go... but mostly they go."  "Indigo Children" are now a dime a dozen.  So we have to move on to a new designation, an even more special kind of person.  One that shows up those silly Indigos for the bush-league posers that they are.

Now, we have "Crystal Children."

I'm not making this up.  In an opening passage that should win some kind of award for New Age Doublespeak, we read that the "empathetic and sensitive" Indigos better just step aside:


After discovering more about Indigo Children and the (often misunderstood) gifts that they possess, the question arose: now what?  The answer came in the form of the Crystal Children.

The Crystal Children are the generation following the Indigo Children. Still thought to be relatively young, they have begun to be born from around 2000, though there is some speculation that they arrived earlier, around 1995.  Similar to their Indigo counterparts, these children are thought to be extremely powerful, with a main purpose to take humanity to the next level in our evolution and reveal to us our inner power and divinity.  Some things that make them unique from Indigo Children are that they function as a group consciousness rather than as individuals, and they live by the law that we are all one.  However, they are still are a powerful force for love and peace on the planet.

Yes, I have to say that when I read about the Indigo Children, my response was to shake my head and say, "Now what?"  But I don't think I meant it the same way.

And my goodness, those "Crystal Children!"  They're going to "take humanity to the next level in our evolution and reveal to us our inner power and divinity!"  Who could resist that?

We're then told the twenty-three ways to recognize a "Crystal Child," beginning with the first, that "Crystal Children" possess "large eyes with an intense stare."  I don't know about you, but that sounds vaguely terrifying to me.  If a large-eyed child was staring at me intensely, I wouldn't suspect that I was dealing with a child who was trying to "bring out my inner power and divinity," I would suspect that I was in an episode of The X Files and was about to have all of my blood removed via my eye sockets. 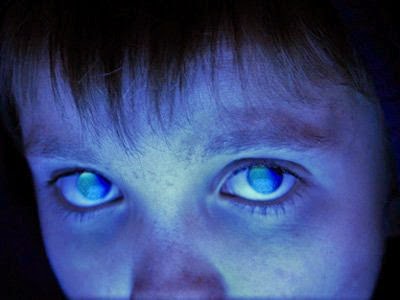 The rest of the ways that you tell if your kid is a "Crystal Child" are suspiciously like the rules for detecting "Indigo Children;" empathy, sensitivity, intelligence, creativity, and so on.  So once again this seems to me to be a way for gullible parents to find a way to feel better about having a child who might be experiencing trouble fitting in in school.  Not that this isn't an understandable goal; my younger son had a rough time in middle school, as many do, and it was a struggle sometimes as a parent to find ways to get him through the experience with his confidence and spirit intact.

But I'm just not convinced that making up a goofy label, and appending to it all sorts of pseudoscientific bosh, is the way to go about it.  Some good old-fashioned coping strategies are usually what's called for, not sticking a wacky name tag on your kid.  The latter, I'd think, would make it more likely the kid wouldn't fit in, especially if (s)he starts babbling to peers that they'd better be nice because you never know how a "Crystal Child" will react when provoked.

So that's our swim in the deep end for today.  I've got to wrap this up so I can go try and teach all of the various types of actual children out there.  I'll make sure to check out their auras.  That's bound to give me some valuable information about how to get them to understand science.
Posted by Gordon Bonnet at 2:35 AM