In order to avoid falling for whatever absurd nonsense happen to be in the offing, you not only need to have some good critical thinking skills, you also need a basic knowledge of the sciences.

This is especially critical given the penchant that pseudoscience hacks have for using scientific-sounding terms in bogus ways.  Given that said hacks are quite good at sounding convincing, and can throw around random vocabulary words with the best of 'em, if you don't understand the basic laws of science, as well as a few solid definitions, you're going to fall for whatever tripe they're offering.

Take, for example, the article from Prevent Disease that I've now seen several times on social media, called "12 Facts About Microwaves That Should Forever Terminate Their Use." 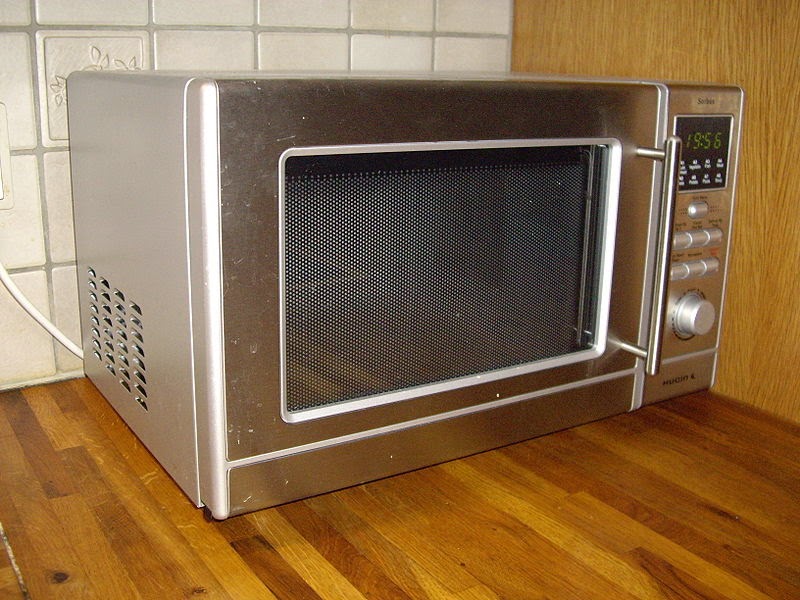 This piece, written by one Marco Torres, is so full of false statements and specious science that it's hard to know where to start.  Here's a sample, picked more or less at random:


Microwaves are a source of electromagnetic energy (a form of nonionizing form of radiation) electronically generated. When penetrating the aliments, they trigger an inner rotation of the water molecules inside the food. This rotation triggers a friction between the molecules and the result is a rapid growth in temperature.

Okay, he starts out well.  Microwaves are a form of non-ionizing electromagnetic radiation that is electronically generated.  But so is the light from a light bulb.  And I don't know what an "inner rotation of the water molecules" even means -- since microwaves are good at making water molecules (and also fat molecules) spin, maybe this was just a slip.  But the water molecules are not experiencing "friction" -- they're simply moving.  Because that's what an increase in temperature means.  The faster molecules move, the higher the temperature, whether that temperature increase is caused by a microwave, a conventional oven, or just sitting out in the sun.

Then, though, we start hearing about all the bad things this can cause:


Microwaves use super-fast particles to literally radiate the contents of water inside food and bring it to boil. Not only has microwave use been linked to causing infertility in men, but it also denatures many of the essential proteins in the food making them virtually indigestible.

"Super-fast" -- sure, given that all electromagnetic waves travel at the speed of light.  And what's the alternative to "literally radiating" the food?  Figuratively radiating it?

And there is no connection between using microwaves and infertility, as long as you keep your genitalia outside of the microwave oven.  So guys -- if you're microwaving your lunch while naked, don't accidentally shut your junk in the door and then turn the oven on.

Then we have this unintentionally funny statement:


Most animals will only consume food in its natural, unprocessed state, but humans actually go out of their way to render food nutritionally worthless before eating it.

True, I suppose.  I've hardly ever seen a squirrel operating a microwave oven.


Think about all the prepackaged and processed foods we purchase and consume annually. It's no wonder the state of our health is in dire straits.

So here we have a mix of truth, opinion, and blatant falsehood, all in one sentence.  Prepackaged food is wasteful of resources -- consider the practice, common in grocery stores, of individually shrink-wrapping zucchini and cucumbers.  Processed food is another matter -- a lot of canned food (especially things like soups) are sky-high in salt and sugar, and rather low in solid nutritional content.  But as far as "our health (being) in dire straits," it actually isn't.  Our life expectancy and general health is better now than at any time in the Earth's history.  The distant past wasn't some kind of idyll in which our ancestors lived in a healthy, natural paradise; it was closer to the line from Thomas Hobbes' Leviathan.

Then we have this:


Microwave ovens work physically, biochemically and physiologically, producing ions and various free radicals, which destroy viruses and bacteria, but not toxins and microtoxins. The experts have concluded that food cooked in microwaves loses between 60% and 90% of its vital energy and, at the same time, the structural disintegration processes accelerates. Also, the nutrient substances are altered, leading to digestive diseases. These microwaves can increase both the number of cancerous cells in blood and the number of stomach and intestinal cancerous cells.

How does non-ionizing radiation produce ions, pray tell?  And it's true that microwaving food won't destroy most toxins, but neither will conventional cooking.  Are you therefore somehow implying that raw toxins are better than cooked ones?  Generally, if your food is toxic, you shouldn't eat it.

And there's no such thing as "vital energy."  Your food is supposed to be dead when you consume it.  My general opinion is that if you're getting your "vital energy" by biting chunks out of live animals, you need psychiatric evaluation, not nutritional counseling.

And there's no connection between microwaves and cancer.  Cf. the Skepticink article I linked above, which explains why that claim is bogus quite nicely.

And so on and so forth.  It's easy to see how someone who isn't well-versed in science might be swayed by this garbage.  Between the science-y sounding language, and the fear talk, you can understand how someone could be alarmed into getting rid of their microwave oven.  The only insurance against this kind of spurious pseudo-journalism is knowing some science, and catching these folks at their game.

So, in short: go ahead and use your microwave.  It's clean, efficient, and has low energy consumption rates.  Used properly, it has no negative health impact.

As long as you don't accidentally microwave your testicles.  I have to admit, that was good advice.
Posted by Gordon Bonnet at 2:56 AM