There's a bizarre battle going on right now in the state of Florida.

First, a Christian group was allowed to hand out bibles to students in eleven high schools in Orange County.  So an atheist group asked the Orange County School Board for permission to hand out atheist pamphlets, and was denied.  This resulted in a lawsuit from the atheists, which was summarily thrown out.

The school board wouldn't comment on the reasons for their denial, only saying that the atheist literature would be "disruptive."  Others opined that since atheism isn't a religion, it's not covered under the freedom of religion clause.

This last suggestion, however, opened the floodgates.  The next to step up to the plate was the Satanic Temple, who applied to the school board to pass out promotional materials including a book called The Satanic Children's Big Book of Activities, the cover of which I show below: 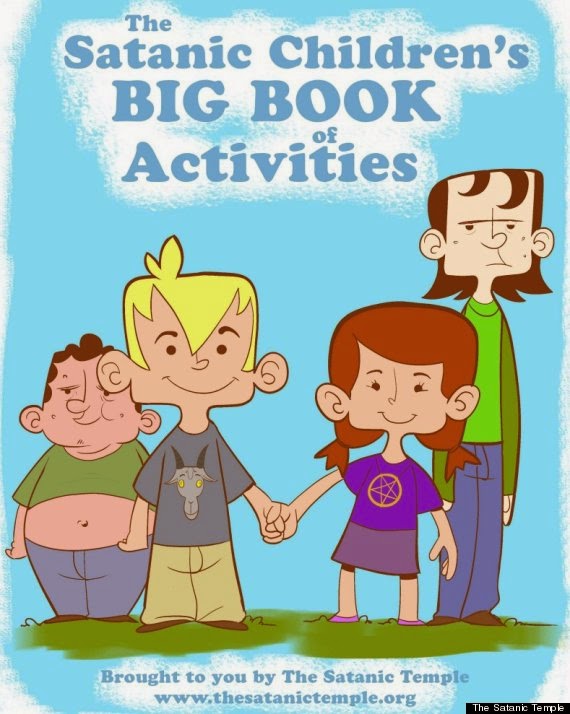 [image courtesy of the Satanic Temple]

The tall kid looks kind of grumpy, doesn't he?  You can tell he's regretting posing for this picture.  Maybe he was coerced somehow, you think?  ("If you won't be part of the group photo, we won't let you take part in sacrificing the goat on the equinox tomorrow.")  And the kid on the left could probably use going up a shirt size or three.

The Satanic Temple, of course, was trying to make a point, and they were completely up front about it.  "There has to be an understanding that they probably have a student body that is generally aware of Christian teachings," Temple spokesperson Lucien Grieves said.  "Kids know about the Bible. They probably go to church on Sundays with their parents. But our material juxtaposed to that offers differing religious opinions, not just the view that's dominating the discourse."

"We don't argue the merits of any one voice in a school environment," Grieves added.  "We think it's in the best interests for everyone, especially the kids, that the district not to have religious materials of any kind distributed in schools."

If that wasn't enough to make the school board question the wisdom of their actions, just yesterday we had another group throw their hat into the ring.  This, unfortunately, was the Raelians, a religion based in France that believes that the Earth was created by an extraterrestrial species, who are still more or less managing matters.  The core beliefs of the Raelians are that we should strive for world peace, feel free to have lots of sex with anyone who is willing, and both men and women should run around shirtless all the time.

"It's about equality for all," Donna Newman, spokesperson for the International Raelian Movement in South Florida said.  "No violence, peace on Earth.  If society is just leaning towards just one specific doctrine, it's not fair.  Why can't they open up their doors to other beliefs?  Let the children choose, not just pound one doctrine into their heads all their lives."

So.  Yeah.  If the whole debacle brings up the phrase "Be careful what you wish for," I have to say that it did for me, too.

But the main thing that bothers me, here, is that none of the groups -- Christian, atheist, Satanist, Raelian -- seem to be thinking much about the children, here and now, who are in the middle of what is turning into a four-way tug of war.  Sure, the school board created this mess, through a misguided Freedom-Of-Religion-As-Long-As-It's-The-Right-Religion approach.  But now the kids are the victims, hearing every other day about some new group who wants a crack at their allegiance.

Can we clarify one thing, here?  Schools are about free education.  They are not about proselytizing, a lesson that I can only hope the Orange County School Board has learned.  But they are also not about using high school students to score political points, however important the issue is (and I do think this issue is important).  Children are not pawns on a chessboard, and partisanship has no place in the classroom.

Being an out atheist in my community means that a good many students walk into my classroom knowing my views on religion.  But that's no different, really, than students seeing one of their teachers walk into any of the half-dozen or so churches in our village.  I keep my religious opinions (and my political ones, as well) out of my classroom.

And so should every teacher.  And so should school boards.  The Orange County School Board's misstep, therefore, serves as a shining example of what not to do.  All of us -- religious and atheist alike -- hopefully get that by now.  So to all the groups currently clamoring for these poor Florida teenagers' ears, I can only say one thing:

Point made.  Time to lay off.
Posted by Gordon Bonnet at 2:46 AM