Yesterday we had a report from Española, New Mexico that a surveillance camera at a police station had caught an image of a ghost walking across a locked compound. 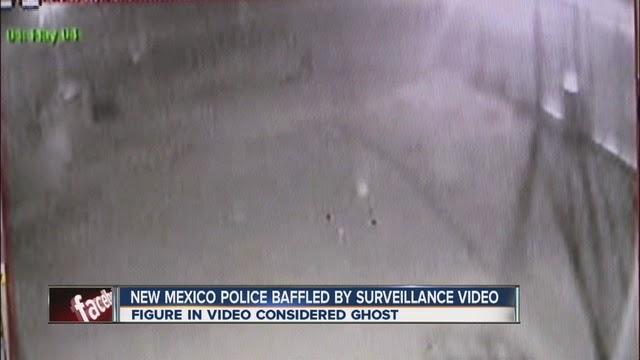 The local television station picked up the story, and reporters showed up on the scene.  "There's no way in or out of the secured area without an opened gate, or an alarm sounding," the reporter who covered the story said.  An unnamed officer showed her the area where the "ghost" was seen, and said, "You can see it walks through in the direction of the old transport cages, and you can see there's no way for it to get out through there, but it walks right through."

"Detectives say there is no logical explanation," the reporter continues.  "It's not an issue with the lighting, or a technical glitch.  And it turns out, there are a lot of ghost stories around here."

"A lot of our officers have seen certain things," one of the policemen said.  "Some of the officers have felt what appears to be someone breathing down their neck as they're working on reports in the briefing room."

"Española police tell us that as far as they know, this is not an ancient Indian burial ground, and they say that the police station has been there since 2006, but no inmates have died here," the reporter tells us.

And to wrap things up, the officers are asked if they believe in ghosts, and if they think this was the real deal... and predictably, they say yes.

Now, I want you all to go to the link I posted above, and watch the video for yourself.  You'll see why in a moment.

Alrighty then.  Let's stop and think about this a little.

First, the ghost could easily be an insect or spider walking across the lens of the camera.  Something that close up would appear blurry and indistinct -- much like the "ghost" was.  But I'll bet that when you watched the video, you were in complete agreement with the officers that the image was shaped like, and walked like, a human.  Why?

Because you'd been primed to believe that it was a human shape.  The officers said so.  When we're told what to see, we most often see it.  Turning back to Michael Shermer, and the talk he gave from which I pulled the above quote, the phenomenon of priming is a well-studied, and well-understood, characteristic of the human mind.  In his talk, he presents us with a bit of a Led Zeppelin song played backwards, and it sounds like gibberish -- until we are given subtitles that tell us what we're supposed to be hearing.  And then, lo!  We hear exactly that.  (And no surprise that the backmasked lyrics are all about Satan.)

So if you go back and watch the video again, and consciously try to see the image on the surveillance tape for what it is rather than what you were being told it was, suddenly it doesn't seem as clear that it's human, any more.  It could well be a bug, in fact.

But suppose further analysis, should such become possible, shows that the image is in fact human-shaped?  It still doesn't mean it's a ghost.  Some older security cameras aren't digital, meaning that they run on a magnetic tape system, similar to old VCRs.  Since there's no need to keep tapes on which nothing interesting happened, they are frequently reused and recorded over -- sometimes resulting in what amounts to an echo from a previously recorded video.  It's possible that there was a video recorded of a guy crossing the compound when the gates were open, and that those images weren't fully recorded over in the new video.

Do I know that one of these two explanations is correct?  No.  Maybe there was no bug, and for all I know the security system used in the Española Police Department is running on digital video recording only.  But I'd want to explore all of the possibilities of a natural explanation before I jump to a supernatural one.  And unfortunately, that isn't happening here.  The reporter, especially, wasn't helping matters, by suggesting that if there was no ancient Indian burial ground nearby, and no one had died in the station, that we'd exhausted all the possible avenues of inquiry.

Let's not let prior belief, priming, and fear hobble our capacities for rational thought, okay?
Posted by Gordon Bonnet at 4:39 AM