A couple of years ago, I went to visit my cousin's family in Las Cruces, New Mexico, and while in the state I insisted on making the drive out to see the International UFO Museum in Roswell.

Yes, it was campy, but it was fun.  My wife spent most of the visit rolling her eyes, but I did get a poster for my classroom, and an opportunity to have my photograph taken having a nice drink in an alien bar that would have only been improved by having a band like the one in Mos Eisley spaceport. 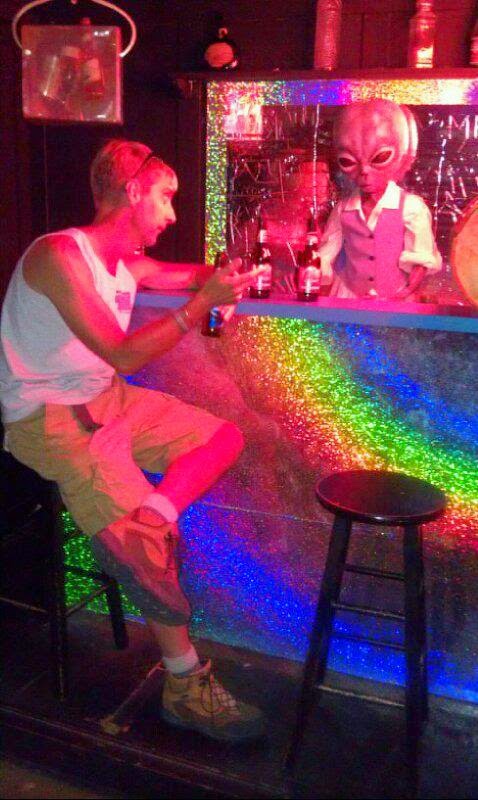 The "Roswell Incident" is one of the most talked about and thoroughly studied UFO stories in history.  In 1947, the museum's website says, "something happened" in the desert plains near Roswell.  The government says it was the crash of a high-altitude weather balloon, but there are alleged whistleblowers (most notably Lieutenant Walter Haut) who claim that it was the wreck of an alien spacecraft.  There are famous photographs of an "alien autopsy," traces of material from the wreckage, and dozens of eyewitness accounts.

What does it all add up to?  Not much, is my opinion.  Could the Roswell debris be the wreckage of an interstellar alien spaceship?  I suppose.  Could it be a hoax, a conglomeration of stories that grew by accretion after a completely natural, terrestrial event?  Yes.  What we have thus far does not meet the minimum standard of evidence that science demands, so for me the jury is still out.

Then of course, there's Neil deGrasse Tyson's comment about the whole thing:  "You're telling me that these aliens flew halfway across the galaxy, and then they couldn't land the damn ship?  If those are the kind of alien visiting the Earth, then they can go home.  I don't want to talk to 'em."

But even given the fact that we have all of the evidence that we're likely to get -- meaning that skeptics like myself will remain unconvinced either way, the believers will continue to believe, and the disbelievers will continue to disbelieve -- the whole thing is still debated endlessly.  People look for new angles, however unlikely those are to lead to anything productive.  And some of those new angles are so odd that they make the original arguments of the UFO crowd seem like peer-reviewed research.

Take, for example the article over at The UFO Iconoclast that says we have only one option for continuing our research into Roswell:

Because we all know how much more reliable a study becomes when you compound it with pseudoscience.  Not that that's the way they frame it:


The remote view protocol that we use at Spirit Rescue International is defined as ‘scientific’ and/or ‘coordinate’ remote viewing.  In order to apply it to the Roswell Incident there would need to be more monitor control, protocol modification, use of the correct data type and extended sessions.  The sessions would be conducted by remote viewers who have minimal knowledge of the Roswell Incident. We believe these objectives can be achieved.

Which brings up two rather thorny problems:

This last issue is the hardest one.  Suppose a remote viewing team determined that the pieces of the Roswell crash -- incontrovertible evidence of a downed spaceship -- were being kept in a warehouse in Topeka.  Can't you just imagine the telephone conversation that might ensue?


UFO investigator:  We know the wreckage of the Roswell spaceship is in Topeka.  Can you let us have a look at it?

Government official:  It doesn't exist, so no.

UFO investigator:  Topeka does so exist.  My grandmother lives there.  Ha!  We've caught you in a bald-faced lie.

Government official:  Not Topeka, the spaceship.  There's no spaceship parts, in Topeka or elsewhere.

UFO investigator:  Your denial just proves that we're hot on your trail!

So the whole thing is kind of a non-starter, from a variety of angles.

Understand, though, that no one would be happier than me to have undeniable evidence of alien intelligence.  Even if the aliens in question couldn't successfully land their ship.  Hell, I'm 53 and I still have trouble parallel parking, so I'm not going to judge.  But I'm with Tyson on one thing: the evidence thus far is unconvincing.  And that includes any evidence -- if I can dignify it with that term -- that comes from psychics.