I'm getting a little tired of politicians dodging questions -- usually about either climate change or evolution -- by saying, "Well, I'm not a scientist."

In other words, don't expect me to answer authoritatively.  Allow me to proclaim my ignorance as if it somehow implied open-mindedness, as if Not Knowing Stuff was a job qualification.

First there was Marco Rubio (R-FL), who back in 2012 was interviewed by GQ and was asked point blank how old the Earth is.  "I'm not a scientist, man," he said.  "I can tell you what recorded history says, I can tell you what the Bible says, but I think that’s a dispute amongst theologians and I think it has nothing to do with the gross domestic product or economic growth of the United States.  I think the age of the universe has zero to do with how our economy is going to grow.  I’m not a scientist.  I don’t think I’m qualified to answer a question like that.

"At the end of the day, I think there are multiple theories out there on how the universe was created and I think this is a country where people should have the opportunity to teach them all.  I think parents should be able to teach their kids what their faith says, what science says.  Whether the Earth was created in 7 days, or 7 actual eras, I’m not sure we’ll ever be able to answer that.  It’s one of the great mysteries."

Rubio must have discussed strategy with the governor of his state, because when Rick Scott was asked this May whether he thinks climate change is real and/or anthropogenic, his response was similar in tone.  "I'm not a scientist," Scott told reporters.  "I've not been convinced that there's any man-made climate change... Nothing's convinced me that there is."

Right around the same time, Speaker of the House John Boehner was asked the same question, and gave a nearly identical answer.  "I'm not qualified to debate the science over climate change," Boehner said.

And just this week we have Bobby Jindal, governor of Louisiana, joining the ranks of the proudly ignorant.  Asked at a public event whether he believed in the evolutionary origins of biodiversity, Jindal said, "Well, the reality is that I am not an evolutionary biologist.  What I believe as a father and a husband is that local schools should make decisions on how they teach...  I want my kids to be taught about evolution; I want my kids to be taught about other theories."

This despite Jindal's Bachelor of Science degree from Brown University, with a major in biology.

Can we just clarify one thing, here?  None of the politicians in Congress, or in the governors' mansions, are scientists.  If they were scientists, they would be doing research, or teaching in a university somewhere.  But politicians don't have to be scientists, you know.

They just have to be smart enough to listen to the scientists when they talk.

The statements by Rubio, Scott, Boenher, and Jindal are about as intelligent as a man who isn't sure he should take the antibiotics his doctor prescribed to treat his strep throat.  "Well, I don't know if I should take this medicine or not," he tells his friend.  "After all, I'm not a doctor."

No, you're not, you doofus.  That's why you just went to the doctor.  All you need to do is to trust his knowledge and expertise, and do what he says.

Honestly, however much I like to write about science, I'm not a scientist, either.  I'm a high school science teacher.  I've never done original research, never had a job working in a lab, never written a scholarly paper.  On the other hand, I do know how to read.  If I want to know what the latest research says, I can pick up a science journal and see what conclusions have been reached.  If it's an area outside of my expertise, I can find someone who knows more than I do to explain it to me.

Politicians have these guys, you know?  They're called advisors.  The job of an advisor is to help out elected officials when there are issues about which they lack information or depth of understanding.  Which there always will be; holding high office means dealing with extraordinarily complex situations, and doing what amounts to multivariable analysis on the fly.  And to be fair, you can't be an expert about everything.

But you can trust the experts when they reach consensus.  Which they have, on both the subject of evolution and of anthropogenic climate change.  There is no debate; and especially in the case of evolution, there are no other theories.  The alternatives to evolution are unsupported mythological worldviews, on par with an astronomical model that has the Earth resting on the back of four elephants standing on the back of a gigantic flying turtle. 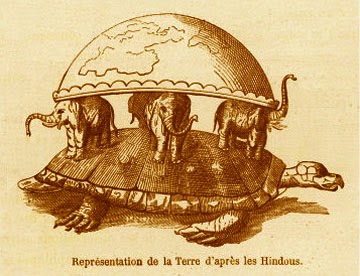 Drawing by Camille Flammarion (1877) [image courtesy of the Wikimedia Commons]

Look, I understand that Rubio et al. were being disingenuous.  Given the religious fervor of their constituencies, especially in the American Southeast, it would not be politically expedient to say, "Of course evolution is true.  Duh.  Next question."  But dodging the question, and giving the impression that ignorance is the same thing as keeping an open mind, is simply handing the science deniers ammunition.

And the last thing we need here in the United States is to do something that makes the citizenry understand science even less than they already do.
Posted by Gordon Bonnet at 2:44 AM