Spurred by my post a couple of weeks ago debunking claims that microwave ovens are unsafe, a loyal reader of Skeptophilia sent me an email saying, "Ha.  A lot you know.  Your microwave has just lulled you into a false sense of security.  Because, you know... demons."

Along with the message, he sent me a link to an article from Empire News called "Paranormal Investigators Confirm Poltergeist Possession of Microwave."  And as soon as I saw the title, I knew this was gonna be good. 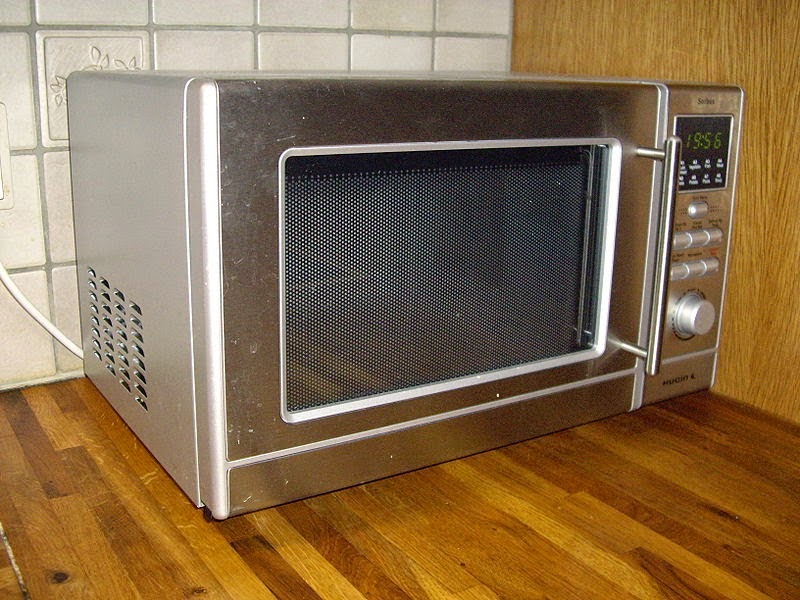 Turns out that Bill Michaud, of Louisville, Kentucky, has been having trouble with his microwave oven.  "We found [the microwave] in the attic when we moved in a few months back," Michaud said.  "Didn’t have one, so figured, ‘what the hell,’ might as well try it.  I tell you, the thing heats up the food real nice.  Sometimes it beeped or turned itself off in the middle of cooking, though.  Then really weird things started happening.  It zapped at food as if we were putting shards of metal in it.  I couldn’t figure it out."

Michaud's wife, Betty, concurs.  "It turns on by itself.  It turns off by itself, too," she said.  "It’s like it’s messing with me.  No matter how many times I popped the door shut, the minute I leave the room it pops open again.  One night, really late, I walk into the kitchen and I’m about to open the fridge, and the microwave door flies open, lighting the whole kitchen up in a horrible, scary lightning-blue color.  It’s like it wanted to electrocute me."

Well, I know what it's like to own a mechanical device that appears to be not only sentient, but evil.  I feel that way about my lawn mower, which seems to have a sensor that detects how long the grass is, so it knows when to break down.  One time this summer, when the grass had gotten so long that my only other choice would have been to rent a flock of sheep, the Possessed Lawn Mower decided that this would be a fine time to stop working.  So it let me back it out of the garage, and get all the way down the hill into the back yard, and then in rapid succession (1) the blade suddenly stopped turning, (2) the engine stalled, and afterwards would only make obscene farting noises when I turned the key in the ignition, and finally (3) it simply decided to stop responding entirely and became the world's largest paperweight.  Because (4) the wheel release is broken, and the brakes engage whenever the motor isn't running, the Possessed Lawn Mower was left out in the back yard in the rain, with the grass slowly engulfing it, until the mower repair guy had time to come fix it three weeks later.

Bill and Betty Michaud certainly had reason to stop using the microwave, not to mention a good explanation as to why the previous owners had tossed it up in the attic.  But that didn't stop them from continuing to use it, until one day when Bill was heating up some leftovers.  "[I]t went off like the food was done," Michaud said, "and when I looked over, the damn thing was still going and said 6:66."

Well, that was enough for him.  Instead of doing what I would have done, which is throw it out and buy a new microwave, he called in some paranormal investigators.  They got Kevin Young, a professional ghost hunter, who got permission from the Michauds to spend the night in the house.

"The Michauds didn’t want to go without a microwave, or risk upsetting the spirit by taking it out of the house," Young said.  "My wife, who is also on my squad, is highly empathic.  As we warmed up TV dinners in the microwave, she sensed a presence.  As soon as she mentioned it, the microwave started beeping repeatedly.  The door flung open, and my 'Hungry Man' dinner went flying across the room.  We pressed the off button.  We unplugged it.  It beeped several times after we cut off the power.  Of course our digital recording became corrupted, which often happens when there is such strong energy."

Of course.  And you have to admit that the spirit crossed a line when it threw Young's 'Hungry Man' TV dinner across the room.  In the words of the inimitable Bugs Bunny, "Of course you know: this means war."

So Young called in the big guns, namely an "authority on mechanical possession," one Carl Richards.  Richards confirmed the presence of a poltergeist in the microwave, but cautioned the Michauds against simply throwing the oven out and getting a new one.

"It is important to remember, the malevolent presence does not strictly ‘live in’ the microwave," Richards said.  "Getting rid of the machine will not solve the problem.  It has the ability to travel throughout the electrical wiring in the house."

Which is pretty scary.  God forbid a poltergeist should get into the coffee maker or something.

In the end, Young and Richards advised the Michauds to stop paying attention to it.  "It is best not to engage the being," Young told them.  "Try not to be fearful.  Always remain calm.  If you’re facing a poltergeist in your kitchen devices, just ignore its outbursts, and it will not be able to feed off your energies."

Myself, I'd have been more worried about the damn thing malfunctioning and burning down the house.  But that's just me.

The Michauds still use the microwave, which "heats up leftovers like a champ," and they ignore its periodic demonic outbursts the same way you'd "ignore a child's temper tantrum."  So it all ended happily enough, which I suppose is good.

So Young and Richards have wrapped up their work in Louisville, and presumably are looking for other possessed devices to investigate.  I'd like to invite them to come look at my lawn mower.  My lawn is needing to be mowed, in what is likely to be the last mowing of the season, and this would be an inopportune time for it to malfunction.  Meaning that the demon that lives in the engine is going to be primed and ready.  I'd like to have a strategy in place by then.  Be prepared, that's my motto.
Posted by Gordon Bonnet at 2:52 AM