You often hear the True Believers in such questionable phenomena as UFOs, Bigfoot, psychic phenomena, and so on rail against us skeptics for not taking them seriously.  "You dismiss us out of hand," they say, "which isn't being skeptical, it's being a scoffer.  How can we gain any credibility amongst serious investigators if you won't even listen to our claims?"

Well, part of it is the fact that the True Believers are so bad at self-policing.  They take claims that might be worthy of serious consideration, and mix them liberally with the rantings of wingnuts, and then seem surprised when we throw up our hands in frustration and stop paying attention.

Take the pair of posts that appeared this week over at UFO Digest, a site that bills itself as follows:

UFO Digest (UD) and its contributors create content that engages us all in thinking consciously about our planet and beyond: be it extraterrestrial, terrestrial, scientific or supernatural or other phenomenon.

Sounds pretty thoughtful, doesn't it?  Well, consider these two articles, which appeared UFO Digest in the last week, both by one Lester Maverick, and both of which sound like the plot of a low-budget made-for-TV movie on Syfy.

Let's start with "About Quetzalcoatl and Quentin," which purports that the Mayan feathered serpent god Quetzalcoatl was actually a space dude named... Quentin. 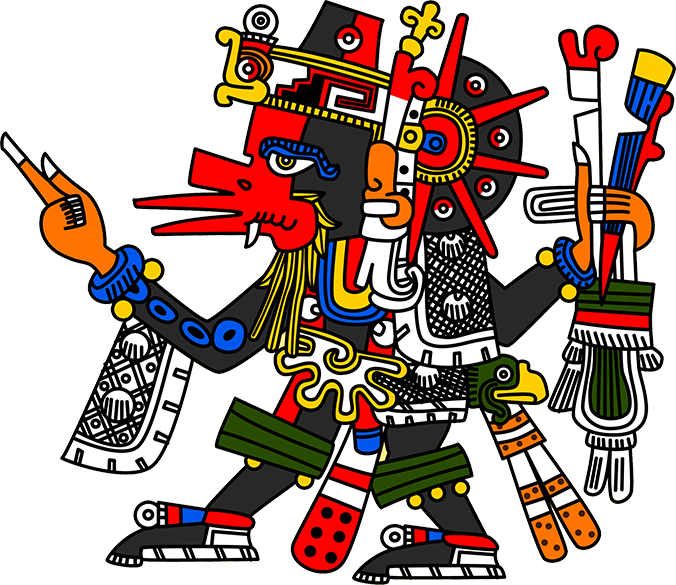 Quetzalcoatl, or perhaps Quentin [image courtesy of the Wikimedia Commons]

I'm not making this up, although Lester Maverick certainly was.  Here's an excerpt:


Perhaps you might be intrigued by how Quentin (his space name) became the legendary god Quetzalcoatl in South America...  Quentin is a real to life extraterrestrial SUPERMAN originally from the fifth Spectran dimension with all the super powers of a superman!  Also Quentin is a grade 5 personal representative of the Council of Guardians who are a kind of a group mind of super beings who are the elder brothers of humanity everywhere in multiple universes...

Currently, Quentin is grade 5 Spectran adviser to the Federation of Psychean Worlds whose Psychean astronauts have landed on our world millenia ago and now are even walking our streets...  Quentin is even part of our history because he was Quetazalcoatl, plus Kukulcan and Viracochia all in South America thousands of years ago.

Right.  Makes perfect sense.  But you might be asking, "who are these Psycheans of whom Lester speaks?"  For that, we must go to article two, "Who Are the Psycheans?"  Here's a bit of that one, just so you can get the flavor:


Well they, the Psycheans, look exactly like us and one characteristic that I noticed is that they are very psychic and maybe that is why they call themselves the Psycheans.  Since the Psycheans look exactly like us then pretty well, the only way to recognize them is through psychic means so it's mostly extremely intuitive or very psychic humans who manage to recognize them.  The Psycheans are allied with many other human ETs like the Plaedians, the Arcturians or the Lyrians.  Well, Oscar Magocsi eventually wrote a book about his UFO adventures and his own meetings with the Psycheans and the book is called "My Space Odyssey in UFOs."  This book is available from me if someone wants it.  Some of the Psycheans even became part of our history like "Jason and the Argonauts."

Because the voyage of the Argo really happened.  You know, with the Golden Fleece and Circe the Witch and the Harpies and all.

And I love the way you can only recognize a Psychean if you're psychic yourself.  Maybe I'm a Psychean, you think?  Use your own psychic powers and see if you can tell.  I'll be eagerly awaiting your responses, but I won't promise to tell you if you're right or not, because "Quentin" might be unhappy with me for spilling the beans.  And the last thing you want is to make a feathered-snake-god-space-dude unhappy.

So anyway.  You get the point.  If the UFO crowd (and/or Bigfoot-chasing, paranormal-believing, ghost-hunting types) want us to take them seriously, they need to do a better job of cleaning up their own act.  Some do a good job with it; the Society for Psychical Research comes to mind.  But when stuff like the Ravings of Lester show up on a site that claims to take a serious approach to studying paranormal phenomena, it's no great wonder that we skeptics tend to throw out the whole shebang.