All media is biased.

Even the most conscientious news sources and the most unflaggingly even-handed reporters introduce a bias into the stories they give us -- if from nothing else, from what they decide is news.  They can't report everything, and by making the decision for us that we need to hear story A and don't need to hear story B, we're getting only part of the picture.

But it's often worse than that.  There's the sort of unavoidable bias I describe above, and then there's deliberate slant.

And then, of course, there's downright sensationalist trash.

I found a great example of the last-mentioned yesterday.  To tell you about it, I'd like to show you the same story, done two ways, and see which one you go for.

Let's start with the version of the story done by the Plains-Valley Online News, an outlet from southeastern New Mexico.  In it, we hear about an unnamed driver and his passenger, who spent way too much time drinking in a bar on US 70, and rolled their car.  But the police arrived on the scene to find that the driver and his friend were AWOL.

State Police Officer Lieutenant Emanuel Gutierrez said that they tried to find the accident victims, without success.  But seven hours later, they got a second call to the scene, after the two drunk guys woke up from their bender and wandered back to the road.

The driver was charged and released, and was treated at a local hospital for minor injuries to his hand and shoulder, placing him squarely in the "damn lucky" department, and reinforcing what my mother used to say, that "God protects fools and drunks."

So far, you're probably wondering why this ended up in Skeptophilia.  A couple of drunks wreck their car -- so what?  But let's move on to our second source for this story...

Yes, somehow this rather ordinary and uninteresting little piece was picked up by the notorious British news outlet.  Why, you might ask?

Well, take a look at the headline they gave it:  "Mystery As Two Men Missing For Seven Hours After Car Accident Outside UFO Capital Roswell Wake Up In Field of Donkeys With No Memory of the Night Before."

Let's start with the fact that it's not a mystery.  If you read the original story, you find out that they were sleeping off being drunk. And like many drunks, they had no memory of the night before, because being drunk will do that to one.

Of course, the reporter over at The Daily Mail de-emphasized that point, slipping in a mere passing mention that the driver "admitted he'd been drinking."  What came out much more clearly was the MYSTERY about how these men DISAPPEARED for seven hours and afterwards COULDN'T REMEMBER ANYTHING.  And it all happened near *cue scary music* Roswell, New Mexico.

And for the low-IQ reader who still doesn't understand what they're (wink-wink-nudge-nudge) implying, here's how the story in The Daily Mail ends:


Roswell, New Mexico sprang to international fame on July 8, 1947, when the local newspaper reported the capture of a 'flying saucer' by government officials in the town.

Over the decades since the discovery, conspiracy theorists have insisted that the debris came from an alien spacecraft, and that the fact was covered up by the military.

The continuing belief of alien activity in the area led the Air Force to launch an investigation into the crash in 1995.

Officials concluded that the 'UFO' was part of a balloon launched into the atmosphere as part of a secret government surveillance programme aimed at the USSR.

However, many have refused to accept that explanation, alleging a conspiracy to hide the existence of extra-terrestrial life.

So what are we left with?  Time slips, and aliens, and abductions.  We've gone from two drunk morons wrecking their car to allegations of the paranormal, driven in with the subtlety of a jackhammer.

Never mind that close to 50,000 people live in Roswell without ever seeing a UFO or being abducted.  Let The Daily Mail get a hold of anything that happens nearby, and it turns into a trash piece about aliens. 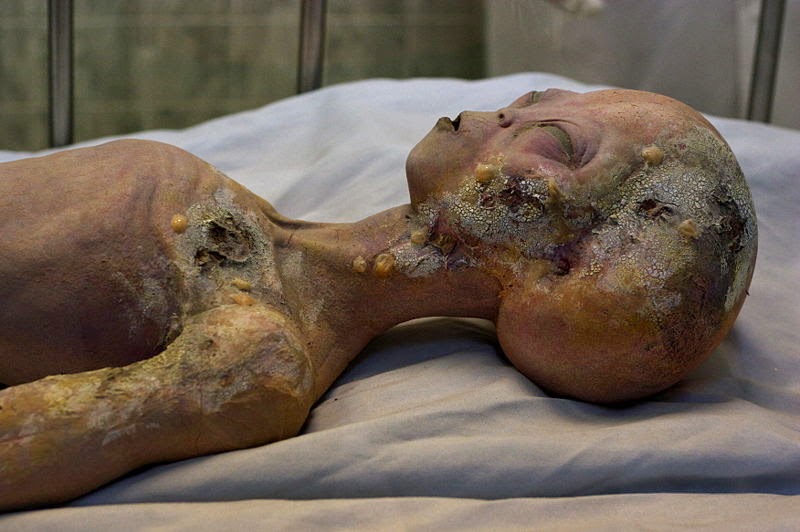 Needless to say, this kind of bullshit journalism makes me crazy.  It's hard enough to get people to think skeptically without this sort of nonsense -- even though a good many folks recognize The Daily Mail for the click-bait garbage it is, there is still a sizable number who read this muck and believe it.

But if you needed an example of why you have to question what you read, this should serve as a good cautionary note.  Don't ever turn your brain off when you're reading the news, whatever the source.  Always find out if the claims hold water, and cross-check facts.

And for cryin' in the sink, don't trust The Daily Mail.  I swear, if they reported that grass was green, I'd want to go out in my front yard to check for myself.
Posted by Gordon Bonnet at 2:48 AM