If you want the best insurance against being taken in by swindlers, hoaxers, and charlatans, cultivate a healthy skepticism and a rational view of the world.

Whenever I see something that pushes the boundaries of credulity, my first thought is, "what other explanations are there?"  I try not to dismiss it out of hand; a habit of instant disbelief is as lazy as gullibility.  But I do look for a scientifically plausible explanation, rather than just jumping on the woo-woo bandwagon.

Unfortunately, though, a good many people don't see it this way.  Which is why the money keeps flowing to people like South African preacher Lesego Daniel. 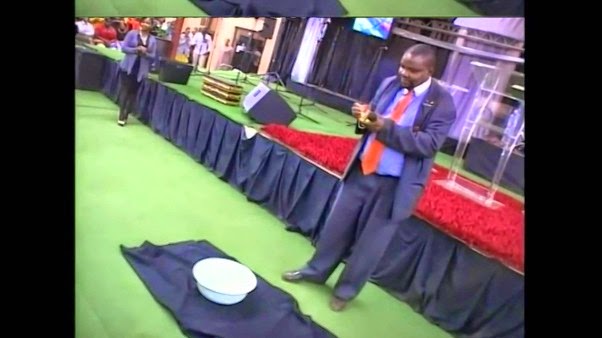 Daniel claims to be able to work miracles, and performs them before standing-room-only crowds.  And he has his followers convinced that he can turn gasoline into pineapple juice.

He has one of his helpers pour what he says is gasoline into a basin, and sets it aflame; and then takes a bottle of it, says a prayer, and gives it to volunteers to drink.  Some cough and gag...

... but they just keep coming up anyhow.  And, apparently, believing.

"It has a lot of fumes," said Daniel, after taking a sip from the bottle himself.  "But I don't have any side effects."  And the true believers go wild.

Pastor Daniel has a video of his dog-and-pony show uploaded to YouTube, and it's worth watching.  "With the flame that will burn here," he shouts to the enthusiastic crowd, "that it is evident enough for you to have faith."

Now, if you've watched the video, you probably noticed what I did; that (1) there were many opportunities for sleight-of-hand, and switching the bottle with the gasoline for a different bottle; and in any case, (2) there's no certainty that Daniel himself actually swallowed any of the liquid.  It'd be easy enough just to put the bottle to your lips, and mime swallowing.  But this hasn't stopped his followers from coming to his performances, and giving him donations of cash for his blessings.

"The level of anointing is not the same," says a disclaimer on his video link.  "If you cannot turn water into wine, do not try this."

This, by the way, is the same man who last year had his followers eating grass, saying that it "would rid them of their sins and heal them of any ailments they may have had."

When people ask me what appeals to me about skepticism, I always answer the same way; skepticism starts from doubt and then proceeds toward either belief or disbelief, based on the evidence.  Other approaches to knowledge, especially those that value faith, require you to turn off your brain and "simply believe."

And there is no way in the world that I would want to cede my own understanding to anyone else -- especially given the fact that there are charlatans like Lesego Daniel in the world.
Posted by Gordon Bonnet at 2:38 AM