If there's one thing I find discouraging, it's how resistant crazy beliefs are to eradication.

You'd think that as we know more about how the universe actually works through science, the remaining spaces would become smaller and smaller, forcing woo-woos to cede ever greater amount of territory to the rationalists.  The parts we can't explain would be all they'd have left to fill up with wacky claims.

In practice, of course, this isn't true.  Crazy ideas like astrology are as popular as ever.  And if we needed further evidence of this rather dismal tendency, we got it this week with the release of the Chapman University Survey of American Fears.

In this survey, they looked at a representative sampling of 2,500 Americans, and asked them whether they believed in a variety of claims.  You want to feel depressed?  Consider the following: 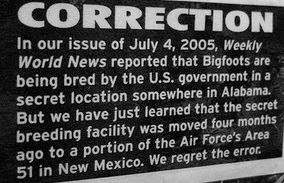 There are a lot of reasons for this, of course.  One has only to turn on the This Really Isn't History Channel or Imaginary Animal Planet or the Discovery of Things That Don't Exist Channel to see one of them.  When shows like Ancient Aliens get a longer run than shows like Cosmos, we have a problem as a culture.

Glitzy, hyped woo-woo -- Monster Quest and Ghost Hunters and Finding Bigfoot and The Unexplained -- has soared in popularity.  To be fair, it's not that I don't see the draw; I love a good scary story, myself, and still consider The X Files to be the pinnacle of television to date.

But The X Files was marketed as fiction, for fuck's sake.  This stuff is being broadcast with the premise that it's true.  And because we don't really put a premium on critical thinking, in public schools or pretty much anywhere else, lots of people are just swallowing it hook, line, and sinker.

Of course, that's not all.  There's also some more insidious forces at work, ones that really aren't about the profit motive.  You only have to consider the influence of evangelical religion to understand why evolution and the antiquity of the Earth and the Big Bang scored so low.  And for the vaccines thing, look at Jenny McCarthy (Not Directly!  Always Use Eye Protection!)  Why so many people consider an actress a more credible source of information on medical science than an actual medical researcher is a minor mystery.  We still tend, as a society, to buy into the whole "cult of ignorance" -- that the scientists are out-of-touch ivory tower intellectuals, who could just as well be evil as be good, and that we're better off trusting good ol' boys who talk plain English.

Or, as the case may be, Playboy models who are college dropouts.

I live in hope that we're still making progress, even despite Chapman University's rather discouraging findings.  After all, if I didn't think humans were educable, my raison d'être for being both a science writer and a science teacher would be gone.  And as Neil deGrasse Tyson put it, "Science literacy is a vaccine against the charlatans of the world who would exploit your ignorance."

But the poll results indicate that we still have a long, long way to go in fighting intransigence.
Posted by Gordon Bonnet at 2:45 AM