Grist for the mill

Over the Thanksgiving holiday we were in Northampton, Massachusetts visiting family, and we took the opportunity to visit an amazing used bookstore called The Bookmill, in Montague. 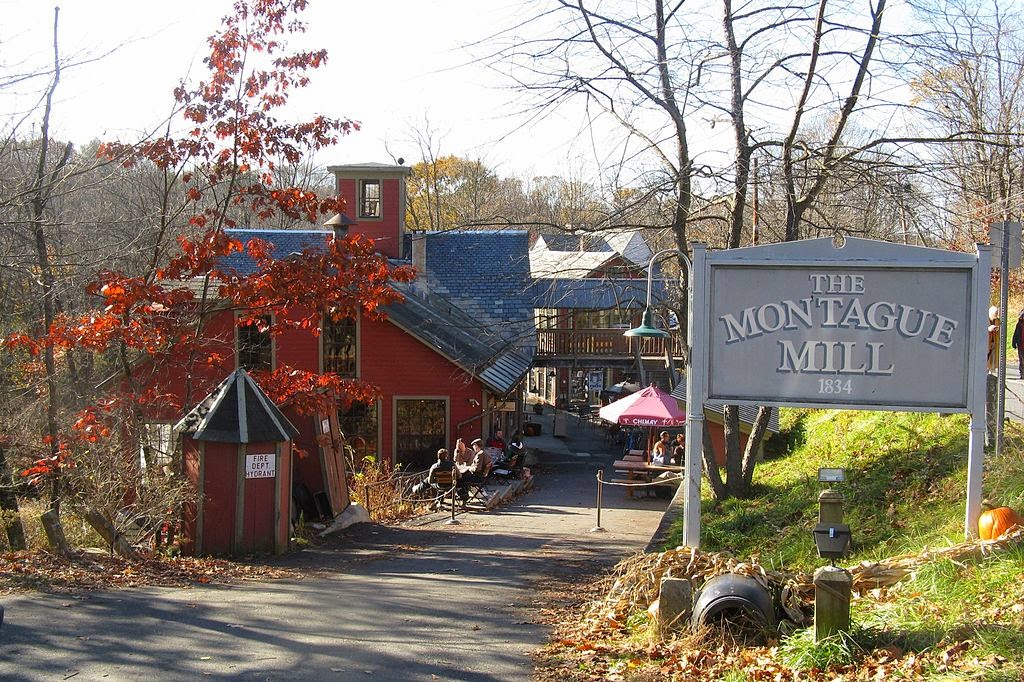 [image courtesy of photographer John Phelan and the Wikimedia Commons]

The Bookmill is sited in an old mill house on the Sawmill River, and bills itself as "books you don't need in a place you can't find."  We found it anyhow, and spent a diverting couple of hours wandering around its maze of little wood-floored rooms and creaking, narrow staircases, and (of course) came away with a box full of books, which we did too need, thank you very much.

For my son Nathan: a book on quantum physics and The Cambridge Encyclopedia of Astronomy.  For my wife Carol: several books of poetry and essays.  For me, on the other hand, three masterpieces:

All of this elicited a great amount of eye-rolling on the part of various family members.  Myself, I was thrilled, and these books will now occupy a nice spot on my bookshelf next to Abominable Snowmen: Legend Come to Life by Ivan T. Sanderson.

But not, of course, before I entertain you with a few excerpts.

From Ghosts Among Us, we read the following, in a story called "The Council House Horrors:"

A family of four, a couple and their grown-up son and daughter, living in a post-war council house in Swindon, Wiltshire, were rehoused when it was feared they were heading for nervous breakdowns.

First, Mrs. Gladys Tucker saw the shadow of a man standing on the landing.  Then all manner of strange things began to happen.  Objects moved themselves mysteriously; windows that should have been shut were found open; door handles raised and lowered themselves.  Apparitions of animals were seen.  The daughter saw strange lights on her bed and bedroom walls.  The son was held pinned to a wall by an unseen force.

The daughter was driven to seeing a nerve specialist, while the son was so shaken that he left home to live with a relation.

When their father, Mr. Herbert Tucker, a storekeeper, now deeply concerned for the health of his wife and daughter, called on the council for help, police went over the house thoroughly and the local electricity board inspected wires and lights, but they found nothing.

Because that's a logical thing to do if your kid is "pinned to a wall by an unseen force."  "Well, Mr. Tucker, your son may have been thrown against a wall by an evil spirit, but your wires and breaker boxes look fine.  I'll leave you with my bill, shall I?"

We are told that the Tuckers moved out, but were followed by other tenants who had bizarre experiences, including seeing the ghost of a dead window-washer who had fallen and broken his neck, and a specter of a headless girl.  But eventually the whole thing died down, presumably because the ghosts got bored and moved to somewhere nicer than a "post-war council house."


Now, let's turn to my second find, UFOs and How to See Them.  My first thought, on picking this one up, was, "How can you write an instruction manual on how to see UFOs?  It's not like they come when called, or anything."  But this is exactly what Ms. Randles has set out to do.  In it, we read such tantalizing hints as:

So there you are, then.  To her credit, Ms. Randles does give a lot of information on "IFOs" -- "identified flying objects."  She tells you how to recognize known phenomena, so you are less likely to be fooled if you see a weather balloon, a distant jet, a bird, or the planet Venus.  So that's all to the good, although I do sort of wish the aliens had left William Shatner out there in the desert.

Then we have the amazing How to Read the Aura, Practice Psychometry, Telepathy, and Clairvoyance, the book that was thrown across the room in disgust by my brother-in-law after reading the following:

The etheric vision is sometimes called "X ray vision" as it allows its possessor to see through physical matter.  In the early days of mesmerism it was developed for the medical diagnosis of diseases, and since the etheric clairvoyant can, in some cases, apparently see into the interior of the human body and closely observe the working of its various organs, it is easy to see how very helpful this form of clairvoyance can be.

My sense is that it wouldn't be so much "helpful" as "disgusting," but that's just me.

Of course, I was curious about auras, and so I turned to the chapter called "What is the Aura?" to read the following:

... (T)he aura is defined as "a subtle invisible essence or fluid said to emanate from human and animal bodies, and even from things; a psychic electro-vital, electro-mental effluvium, partaking of both mind and body, hence the atmosphere surrounding a person..."  The aura is usually seen as a luminous atmosphere around all living things, including what we regard as inanimate matter.

Nathan's comment about the above was that if you're experiencing an electro-mental effluvium, you should probably see a doctor.  I replied that he only thought that because he had a puce-colored aura.


Anyhow.  If you're ever in northwestern Massachusetts, you should definitely visit The Bookmill.  You probably won't find books as entertaining as the three I bought, but I'm sure you'll come away with something awesome.