A glowing report from Georgia

It may sound biased of me, but I think one thing should be an ironclad requirement for holding public office: an adequate understanding of science.

Yes, I know that politics doesn't always connect directly to science.  But I would respectfully submit that science as a means of knowledge, as a way of sorting fact from fiction, is such a critical capacity that no leader should be deficient in it.  Science teaches you a protocol for understanding evidence-based inference, which then can be applied to any area you like.

Add that to the fact that there are realms of policymaking that require an explicit understanding of science -- environmental, medical, and educational policy come to mind -- and this gives us a powerful reason to expect that our elected officials understand not only how science is done, but to have a basic grasp of its fundamental rules.

Instead, we have people like Georgia State RepresentativeTom Kirby (R-Loganville).

Kirby just introduced a bill into the Georgia House of Representatives that is specifically to prevent anyone from creating a glow-in-the-dark human/jellyfish hybrid.  Because evidently that's a thing that they do, down there in Georgia.  And not only do they do it, they do it often enough that Representative Kirby wants a law passed to put an end to the practice.

"We in Georgia are taking the lead on this issue," Kirby states on his website.  "Human life at all stages is precious including as an embryo.  We need to get out in front of the science and technology, before it becomes something no one wants.  The mixing of Human Embryos with Jellyfish cells to create a glow in the dark human, we say not in Georgia.  This bill is about protecting Human Life while maintaining good, valid research that does not destroy life."

What could have precipitated this?

My guess is that someone told Representative Kirby that researchers had experimented with inserting a gene for a jellyfish fluorescence protein into the embryos of cats, creating kittens with phosphorescent skin. 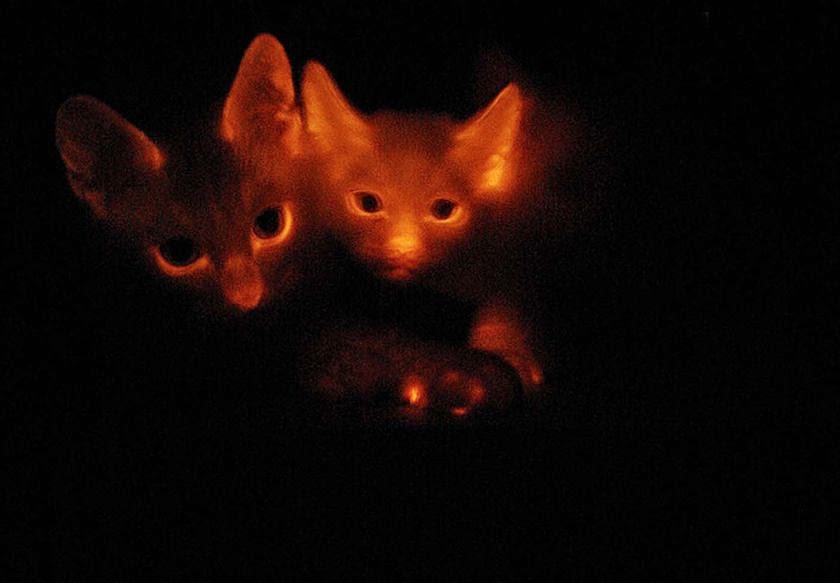 Then, Kirby asked one of his aides, "But... could they do this with human embryos?"  And the aide said, "It's possible."  And Kirby said, "We've got to put a stop to this!"

What bugs me about this is that not only does Representative Kirby apparently have little understanding of how the process works (it has nothing to do with "mixing embryos with jellyfish cells"), he doesn't understand the point of making the glow cats in the first place.  It wasn't just to create demonic-looking cats (can you imagine waking up at night to see one of those staring at you?).  It also wasn't because scientists were thinking, "Ha ha!  Now we can create an army of Glowing Humans that will take over the world!"

The reason this research was done was primarily medical.  The problem with genetic modification is getting an inserted gene to express at the right time and place; so learning how to control the process, generating an animal that not only expressed the glowing protein, but expressed it in sufficient quantities and in one tissue only (the skin), showed that we can potentially do analogous procedures in humans.

Note that I say "analogous," not "identical."  This kind of targeted gene therapy could eliminate protein-deficiency genetic disorders such as cystic fibrosis, Tay-Sachs disease, SCID (severe combined immunodeficiency), and hemophilia.  It works on the same principle; insert the gene into human cells, along with a robust tissue-specific promoter that allows the gene to turn on in the right tissue type.  If all goes well, we could see life-threatening genetic disorders not simply treated, but eliminated.

Of course, I doubt that Representative Kirby understands that.  Anyone who is at the "human-jellyfish hybrid" stage of science comprehension is light years away from getting even the basics of how genetic research works.

And Kirby himself admitted he didn't know what the hell he was talking about.  "I've had people tell me it is [possible], but I haven't verified that for sure," he told reporters.  "It's time we either get in front of it, or we're going to be chasing our tails."

Can I just ask you one question, Representative Kirby?  Why the fuck would you propose a bill regarding something you "haven't verified" and clearly don't have sufficient IQ to understand?

But members of Congress seldom let those sorts of considerations stand in their way.  So now we have a bill on the floor of congress in Georgia to prevent scientists from creating something that (1) they didn't intend to create anyhow, and (2) is impossible to do in the way the bill describes.  Good use of our policymakers' time and taxpayer dollars, isn't it?

I know it must be hard to be an elected official.  It's not only a job I would never want, but one for which I am clearly not qualified.  But I do have one thing going for me; when I don't know what I'm talking about, I generally shut the hell up.

Not so, apparently, if you're in politics.  In politics, you're allowed to have an opinion about everything, whether or not you understand it.  And then you can use that opinion to craft legislation.  Once more convincing me of the necessity of demanding, as a nation, that our leaders have at least a basic comprehension of science before they start interfering with laws that govern how it's done.
Posted by Gordon Bonnet at 2:52 AM