There should be some kind of provision for removing from office politicians who unequivocally demonstrate that they are morons.

Being in public office is highly demanding, requires thinking on one's feet, and necessitates having a working knowledge of a great many different areas.  So I'm not expecting perfection, here.  Everyone makes missteps, and our leaders are no exception.  They should not be excoriated just for uttering a gaffe here or there.

But sometimes, there are examples of idiocy so egregious that they really should prompt a recall of some kind.  We need to be led by the best minds we have -- and if politicians demonstrate that their IQs are lower than their shoe sizes, they should be shown the door.

Because I'm guessing that some of these people are too stupid to find the door unassisted.

I bring this up because of four -- count 'em, four -- examples of deeply ingrained stupidity in our elected officials just from the past three days.  WARNING: put a pillow on your desk, because I'm guessing there will be multiple headdesks to follow.

Let's start with Representative Barry Loudermilk of Georgia, who was asked at a press conference about the link between vaccines and autism.  He responded that he chose not to vaccinate his own children.  "We didn't immunize," he said.  "They're healthy."  Which is analogous to a guy saying, "Seatbelts are unnecessary.  I drive without a seatbelt, and I'm still alive."

Oh, and have I mentioned that Representative Loudermilk is on the House Subcommittee for Science and Technology?

Then we have Idaho Representative Vito Barbieri, who was in a hearing about a bill that involved the use of telemedicine -- using tiny remote devices to give doctors information, such as a little camera that could be swallowed in place of a standard colonoscopy.  Barbieri asked a doctor who was giving testimony in the hearing if the same technique could be used to give doctors information about the fetus during pregnancy.

"Can this same procedure then be done in a pregnancy?" Barbieri asked.  "Swallowing a camera and helping the doctor determine what the situation is?"

The doctor patiently explained that that wouldn't work, because a woman's reproductive system isn't connected to her digestive tract.

Is it just me that finds it appalling that we're allowing men who don't know that a woman's uterus isn't connected to her colon to make decisions regarding women's health?

Even worse is New York Assemblyman Thomas Abinanti, who wants a bill passed blocking the use of GMOs in vaccines.  Here's the language he wants passed:


PROHIBITION ON THE USE OF VACCINES CONTAINING GENETICALLY MODIFIED ORGANISMS.
1. NO PERSON SHALL BE VACCINATED WITH A VACCINE THAT CONTAINS GENETICALLY MODIFIED ORGANISMS.
2. “GENETICALLY MODIFIED ORGANISM” SHALL MEAN: (A) AN ORGANISM THAT HAS BEEN ALTERED AT THE MOLECULAR OR CELLULAR LEVEL BY MEANS THAT ARE NOT POSSIBLE UNDER NATURAL CONDITIONS OR PROCESSES, INCLUDING RECOMBINANT DNA AND RNA TECHNIQUES, CELL FUSION, MICROENCAPSULATION, MACROENCAPSULATION, GENE DELETION AND DOUBLING, INTRODUCTION OF A FOREIGN GENE, AND A PROCESS THAT CHANGES THE POSITIONS OF GENES, OTHER THAN A MEANS CONSISTING EXCLUSIVELY OF BREEDING, CONJUGATION, FERMENTATION, HYBRIDIZATION, IN VITRO FERTILIZATION, OR TISSUE CULTURE; AND (B) AN ORGANISM MADE THROUGH SEXUAL OR ASEXUAL REPRODUCTION, OR BOTH, INVOLVING AN ORGANISM DESCRIBED IN PARAGRAPH (A) OF THIS SUBDIVISION, IF POSSESSING ANY OF THE ALTERED MOLECULAR OR CELLULAR CHARACTERISTICS OF THE ORGANISM SO DESCRIBED.

There's just one tiny problem with all of this.  The processes he's describing are the ones used to inactivate the viruses and bacteria used in vaccines.  If the bill passed, it would require that vaccines contain unmodified pathogens -- i.e., the strains of the microorganisms that cause disease.

Can't you hear what the doctors would have to tell parents?  "Just to let you know, Mrs. Fernwinkle.  One of the side effects of this tetanus vaccine is that your son will get lockjaw and die, because I'm injecting him with the tetanus bacteria itself."

But no one is a better candidate for the "You Are Too Stupid To Govern" award than Senator James Inhofe of Oklahoma, who is the chair of the Committee on the Environment and Public Works, and who this week brought a snowball into the Senate and threw it on the floor.  "In case we have forgotten, because we keep hearing that 2014 has been the warmest year on record, I ask the chair, 'You know what this is?'  It's a snowball, from outside here.  So it's very, very cold out.  Very unseasonable."

Which makes me want to scream, "There is a difference between weather and climate, you illiterate moron!"  "It just snowed" is not an argument against climate change, just as "I have lots of money" is not an argument against world poverty.  And ironically, the same day as Inhofe did his idiotic demonstration, scientists at Berkeley National Laboratory in California announced that they had data directly correlating carbon dioxide concentrations in the atmosphere with the trapping of thermal energy -- something that has been demonstrated many times in the lab, but never under ordinary conditions out in the environment.  The data -- which has been collected over a period of ten years from two widely-separated sites -- agrees exactly with climate-change models that nitwits like Inhofe think have been manufactured by evil scientists for their own personal gain. 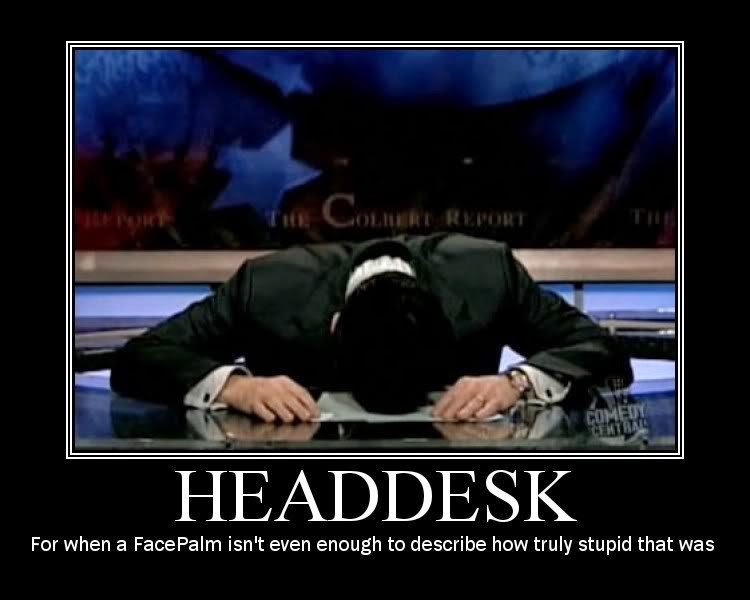 So I really think we need to have an option for recall.  An "I'm sorry, we have to hold a revote, because we accidentally elected a blithering idiot to public office" clause.

I mean, seriously: do we want these people in charge of making decisions about our future?

Now, I have to go.  I've got an ice pack and some aspirin waiting for me.  My forehead hurts.