Of all of the logical fallacies, the most completely maddening one is confirmation bias.

This term refers to the tendency of people to accept minimal or flawed evidence without question if it supports what they already believed to be true.  And the "Ha ha, see, I told you I was right" attitude it engenders makes me want to punch a wall.  I suppose I should be more forgiving, because we're all prone to it, in some measure; we all have our preconceived notions, our unexamined biases.

But when it starts driving global science policy, it's a much, much bigger problem.

Take the piece by Christopher Booker in The Telegraph that appeared last Friday, called "The Fiddling With Temperature Data is the Biggest Scientific Scandal Ever."  In it, Booker calls into question the temperature data that scientists are using to support a near-universal consensus on global climate change.


When future generations look back on the global-warming scare of the past 30 years, nothing will shock them more than the extent to which the official temperature records – on which the entire panic ultimately rested – were systematically “adjusted” to show the Earth as having warmed much more than the actual data justified...

...(Paul) Homewood (of the blog Not A Lot Of People Know That) checked a swathe of other South American weather stations around the original three.  In each case he found the same suspicious one-way “adjustments”. First these were made by the US government’s Global Historical Climate Network (GHCN).  They were then amplified by two of the main official surface records, the Goddard Institute for Space Studies (Giss) and the National Climate Data Center (NCDC), which use the warming trends to estimate temperatures across the vast regions of the Earth where no measurements are taken.  Yet these are the very records on which scientists and politicians rely for their belief in “global warming”.

In other words: the scientists are manipulating the data to create a global warming panic (for no apparent reason I can see), and you shouldn't trust the data itself, because it's already been fudged:


Of much more serious significance, however, is the way this wholesale manipulation of the official temperature record – for reasons GHCN and Giss have never plausibly explained – has become the real elephant in the room of the greatest and most costly scare the world has known. This really does begin to look like one of the greatest scientific scandals of all time.

This article has sorted people neatly into two camps.

I've already seen the Booker article posted several times on Twitter and Facebook, usually with a snide comment along the lines of, "See?  We told you that climate change wasn't real!"  The other half of the time it's posted along with commentary that is barely printable, by people who recognize that Booker is, to put not too fine a point on it, full of shit.

Here's how John Timmer, who unlike Christopher Booker actually has a Ph.D. in (and understands) science, deflated the "Biggest Scientific Scandal Ever" over at Ars Technica:


(T)he raw data from temperature measurements around the world aren't just dumped into global temperature reconstructions as-is. Instead, they're processed first. To the more conspiracy minded, you can replace "processed" with "fraudulently manipulated to make it look warmer."

Why do they have to be processed at all? Because almost none of the records are continuous. Weather stations have moved, they've changed the time of day where the temperature-of-record is taken, and they've replaced old thermometers with more modern equipment. All of these events create discontinuities in the record of each location, and the processing is used to get things into alignment, creating a single, unified record.

Most importantly, does this processing reflect reality, or is it really a case of "suspicious one-way adjustments?"  Timmer writes:


Does it work? The team behind the Berkeley Earth project performed a different analysis in which they didn't process to create a single record and instead treated the discontinuities as breaks that defined separate temperature records. Their results were indistinguishable from the normal analysis...

(P)eople like Booker (and the blogger whose work he's promoting) repeatedly try to take advantage of the public's limited attention to this topic. I happen to be aware of things like Berkeley Earth and the same arguments surfacing in 2013 simply because I covered them at the time and therefore read up on them in detail. The public won't have that knowledge, so Booker's claims can sound like a damaging revelation—and completely new.

They're not. But I'll bet that if 2015 sets a temperature record, I'll be able to rerun this story with little more than the names changed.

But I'm sure Booker, who is a notorious climate change denier and who claims that "asbestos is as harmless as talcum powder" and that evolutionary biologists "rest their case on nothing more than blind faith and unexamined a priori assumptions," knows this.  It's not like such information isn't readily available.  I found Timmer's article simply by Googling "Booker global warming debunked."

Which means, of course, that Booker is being disingenuous at best, and lying outright at worst. 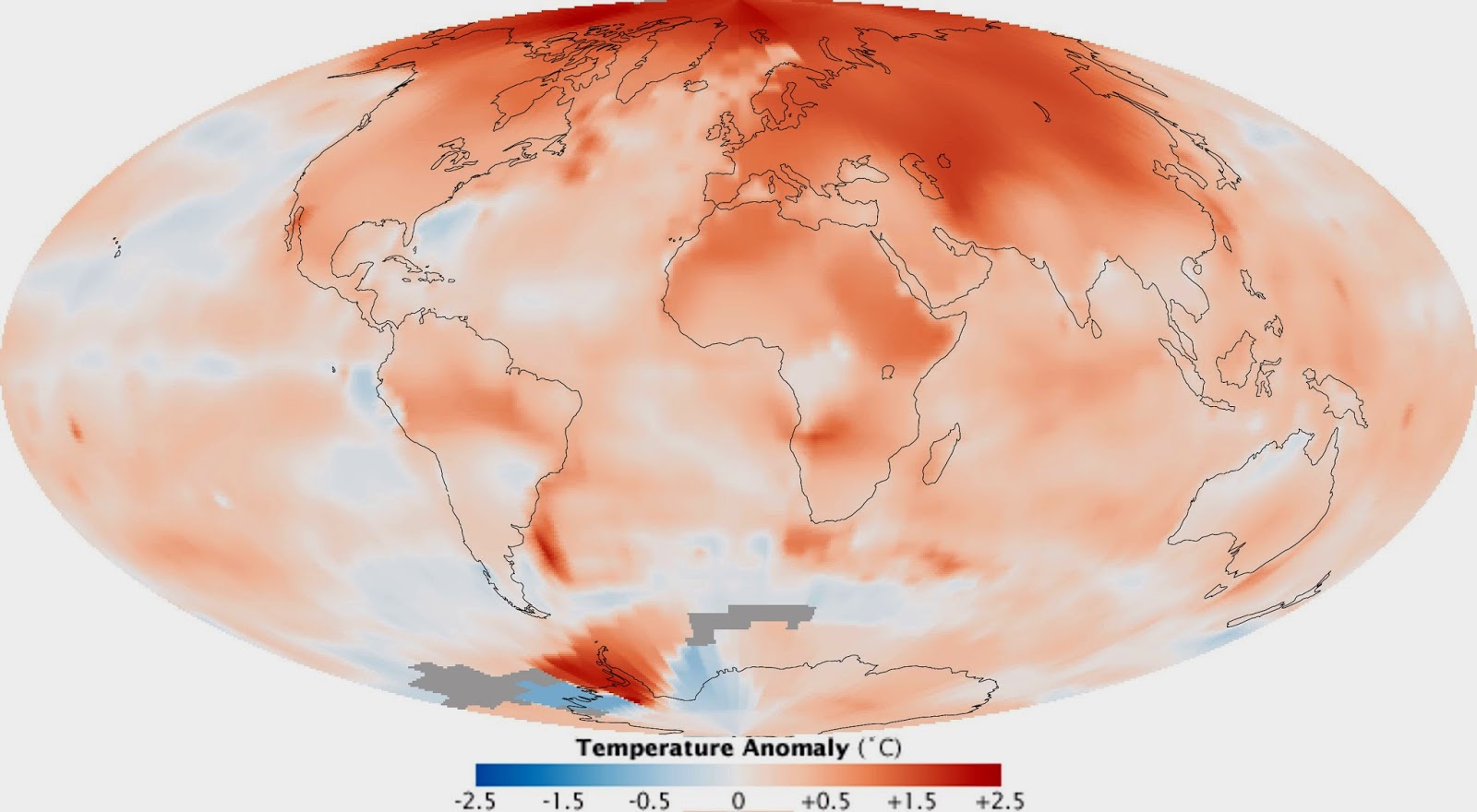 Map of summed worldwide temperature anomalies over the past 60 years.  Note the proportion of red to blue on this map.  [image courtesy of the Wikimedia Commons]

But the most terrible part of the whole thing is, as Timmer points out, what it does to the perceptions of scientists by the general public.  The people who already tended to disbelieve in anthropogenic climate change, whether for reasons of political bias or because of ignorance of the science itself, now have another piece of ammunition to lob at any lawmaker who proposes trying to do something about it.  Confirmation bias here could well be devastating.

Because outside, the world is continuing to warm, the climate to destabilize, the environment to degrade.  2014 was (despite Booker's inaccuracy-ridden screed) the warmest year on record.  The jury isn't even out any more; the world is warming up, and human activities are the cause.  We have created a positive feedback loop with the environment, in the form of warming seas and warming tundra, which is releasing methane into the atmosphere, warming us further.  Some climate scientists think we've already passed the tipping point, so perhaps Booker and his ilk are right in saying that we shouldn't do anything about climate change -- not because it's nonexistent, but because it's already too late.

But I guess it all boils down to who you believe: a journalist with a degree in history (Booker) or the views of nearly all of the trained climatologists in the world.  And if that's even a choice, then we're talking about confirmation bias on a level that might itself set world records.
Posted by Gordon Bonnet at 2:43 AM