Yesterday, something rather unusual happened; I left an educational staff development day without feeling like I needed to kick a small innocent furry woodland animal out of sheer frustration.

Usually, calling these things "a waste of time" is a tremendous understatement, but in yesterday's installment we were given a talk by Dr. Willard Daggett, the CEO of the International Center for Leadership in Education, and I left with a great many things to think about.

Daggett himself has not been immune from controversy, something about which you can form your own opinions after an easy Google search.  But that's not what I want to look at here.  His talk yesterday centered around moving from what he calls the "Urgent Issues" -- things like the Common Core Standards, APPR (Annual Professional Performance Review, the "teacher grading" system), state-mandated standardized tests, and budget cuts -- to looking at what most of us think of as the second-tier "Important Issues."

Those "Important Issues," Daggett says, are the ones that should be moved to the front of the line.  They include: the increasing gap between what schools do and what colleges and business leaders want; the rate at which colleges report students underperforming, needing remediation, and dropping out before graduating; and competition in the global marketplace with college graduates in technical fields who are better educated than the ones that the United States is producing.

In dealing with all of these, Daggett says, educators have been more reactive than proactive.  We keep doing things the same old way, even if the "same old way" isn't working so well.  We have ignored the research about how children learn, about what makes the content rigorous and relevant, about how to increase literacy and mathematical ability.

But the most important thing he said, in my mind, was when he started talking about how we teach our content areas as a disconnected series of facts.  I'm guilty of this myself; I've heard that in an introductory biology class, students learn more new vocabulary than they do in the first year of a foreign language.  We're shy on application and problem solving, and focus instead on teaching (and testing students on) a fact salad that has little connection to the real world.

It's time, he told us, to look at other ways of doing what we do.

I found myself unable to argue with much of what he said.  And this is despite the reputation I have for being something of an opinionated gadfly.  He showed a slide that he said represented how people feel who propose making major changes to schools: 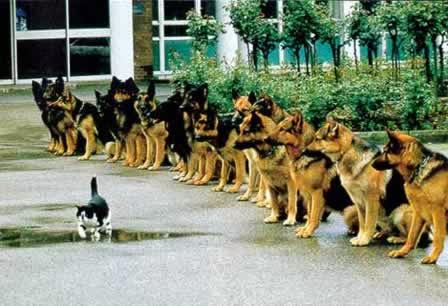 The cat, of course, is the one who is proposing the changes, and the line of German Shepherds the school staff.  He used his laser pointer to point out the dog in the middle who looks like he's about to run out and eat the cat for dinner, and said, "And I'm sure that everyone in this room knows which faculty member's face should be on that dog."  At which point more than one of my colleagues looked in my direction.

So as I said, it's a minor wonder that I didn't get angry.  Because much of what he was saying is a stinging indictment of what I've spent the last 28 years doing, and Dr. Daggett had facts and statistics to bolster his contentions.

But here's the problem, something that I mentioned to him during a break, and for which he didn't have a very good answer.

How can teachers, administrators, and school boards institute a major paradigm shift when (1) students and teachers are still being evaluated on the same old metric of regurgitation-based standardized tests, and (2) legislators are still tying the funding of schools to students' scores on those tests?

Most of us recognized the problem before yesterday; the reason that Dr. Daggett's speech didn't raise more hackles is that the majority of the people in the room already know the scope of the problem (even if they may not have known the specifics he brought up).  But we're caught between knowing that the world is changing, and that we're not meeting student needs very well, and a leadership that demands that we assess student achievement the same way we've been doing for the past fifty years.

It's not the teachers who are blocking the paradigm shift.  It's the people in the State Department of Education who are designing all of the assessments, and the state legislature that is holding the purse strings.

But it was one of the last things he said that made me sit up and frown a little.  He told a personal anecdote about a family member who had had emergency surgery for a life-threatening injury, and compared the way surgeons are treated in hospitals with the way teachers are treated in schools.  "Teachers," he concluded, "are the equivalent of the front-line surgeons in hospitals.  We should treat teachers like surgeons."

All well and good to say.  We have a governor here in New York State who trusts teachers so little that we're not even allowed to grade our own final exams, because of worry that we'll cheat.  We have to fight tooth and nail for every pay increase we get, while the state aid that pays our salaries is cut every year, and the governor has mandated a property tax cap so that school boards couldn't even raise the tax levy if they wanted to.  We're at the whim of a Board of Regents that is so out of touch with what is happening in schools that they have publicly stated that standardized test scores should comprise 50% of a teacher's final "grade," and that if the teacher doesn't meet the benchmark on that 50%, the other 50% -- evaluation by administrators, classroom visits, and so on -- doesn't matter.

Hell, they don't even trust the administrators.  The latest proposal is to have classroom observations done by outside evaluators, to keep the principals from cheating.

Treat us like surgeons?  We're so far from that level of respect and (dare I mention it) salary that the comparison almost made me laugh out loud.  The distrust and disrespect current government leaders have for the teaching profession, and the resultant stress on teachers, is one major reason why we're hemorrhaging talent -- the best and brightest are finding other careers.  Consider, for example, the loss of Stacie Starr, winner of a 2014 Teacher of the Year award in Ohio, who in her resignation speech said, "I can’t do it anymore, not in this ‘drill ‘em and kill ‘em’ atmosphere.  I don’t think anyone understands that in this environment if your child cannot quickly grasp material, study like a robot and pass all of these tests, they will not survive."

So while I thought Dr. Daggett had some good ideas, we were left with no real direction for solutions.  The situation won't change until the leadership does, and I don't see that happening any time soon.  Until then, we're doing just what the State Departments of Education are mandating that the children do; focusing on disconnected details, and avoiding any application of what we know to the real world.
Posted by Gordon Bonnet at 2:49 AM