Civil disobedience as a moral imperative

Let me just say at the outset that I'm a law-abiding sort.  With the exception of getting pulled over twice for driving too fast, I've never had a single unpleasant run-in with the cops.  And both times I got caught speeding, I was able to argue my way out of a ticket.

While I'd like to think that my history of clean living is because I have a respect for authority and the rule of law, some of it is due to the simple fact that I hate complications and conflict.  If I come up to a stop sign in broad daylight, and it's clear that no oncoming car on either side is within a quarter-mile of the intersection, I'd rather stop, look both ways, and then go rather than run the stop sign and risk having a third opportunity to explain my actions to a cop.

But my question of the day is: are there times when deliberately, knowingly breaking the law is the right thing to do?

I'm talking, of course, about civil disobedience.  And in my opinion, sometimes putting your own legal record, safety, or (perhaps) life at risk to make a higher point is not only the right thing, it comes close to a moral imperative. 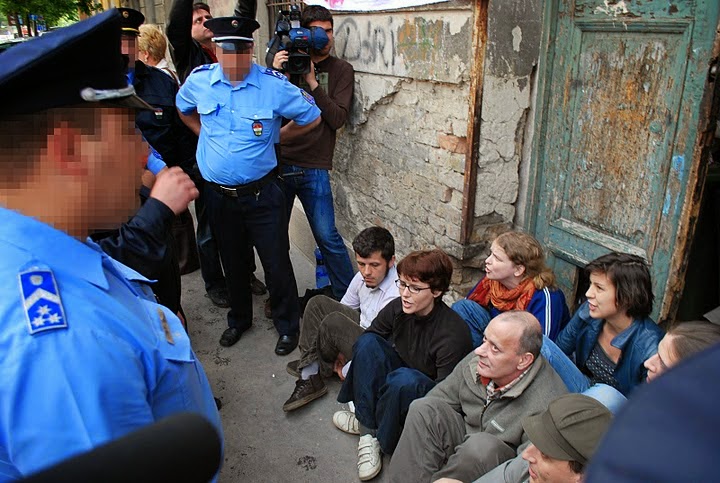 The whole idea of breaking the law to bring attention to a greater wrong has been much on my mind lately, for two entirely different causes, both of which will be immediately evident to regular readers of this blog.  The first one is the "opt-out" possibility for standardized testing, which is coming to a head in a lot of states, most recently New Mexico -- where state education officials are using combative language to make the point that exempting students from standardized tests is illegal, and districts that do not compel all children to sit for mandated exams risk losing their funding.  A number of districts are rebelling, some even providing pre-printed forms to parents to sign that exempt their children from the PARCC (Partnership for Assessment of Readiness for College and Careers) exams.

And none did it with such panache as the Las Cruces School District, where the forms were printed with the statements, "Federal and state laws require all students to participate in state accountability assessments," and "These laws do not offer an exemption or right of refusal to test."  One has to wonder how close they were to adding, "But this form allows parents to exempt their kids anyway," and "You can kiss the Las Cruces School District's rosy-red ass, policy wonks."

The other area in my life in which civil disobedience is making some demands is in our area's attempts to block the storage of LPG (liquified petroleum gas) in unstable salt caverns beneath Seneca Lake.  Over 200 people, including my wife, have been arrested and charged with trespassing for blockading the gates of the facility, and I'm likely to be in the next round.  (Apparently they're not marching the protesters off in handcuffs, which I find kind of disappointing.  Such a missed opportunity for a photo-op.  But if someone can get a photograph of me being arrested, when it happens, I'll certainly find a way to post it here.)

Of course, what I'm talking about here is mild compared to the penalties you can incur in other countries.  Protesting against repressive governments in other countries can get you jailed and/or tortured, being that that's what repressive governments do.  Deliberately breaking the law to make a point reaches its pinnacle of risk in places like Saudi Arabia, where last week a young man was sentenced to death by public beheading for tearing up a qu'ran, hitting it with a shoe, and uttering curses against the prophet Muhammad.  Apparently the man is an atheist -- or, as they call them in that part of the world, an "apostate" -- and he was demonstrating his contempt for religion in general, and Islam in particular, by his actions.

And Saudi law being what it is, in a few weeks he'll almost certainly find himself kneeling in the city square of his home town of Hafr al-Batin, and his head will be severed with a sword.

Which brings up the question of when a cause is important enough to risk your own life.  Or, to put it another way, when is something legal, and at the same time so ethically wrong, that putting yourself in harm's way is the right thing to do?

Not easy questions to answer.  Human morality being the shaky thing it sometimes is, it's easy to conceive of someone breaking the law for his/her own selfish ends, and then justifying it by calling it civil disobedience.  It's also true that one person's civil disobedience is another person's immorality -- as in the parents who are putting other children at risk of disease by their insistence on their right not to vaccinate their own kids.

These are difficult things to sort out.  The best choice is to do a lot of soul-searching before you embark on such a course of action, not only to be certain you understand the risk, but to make sure that you're not engaging in equivocation to rationalize away something that you really shouldn't have done in the first place.  As we discuss at length in my Critical Thinking classes, morality is a deeply personal thing, and unfortunately the words "moral," "ethical," and "legal" don't always line up the way we might hope.  I'll end with a quote from that exemplar of the willingness to put one's life at risk for a higher cause, Martin Luther King, Jr., who wrote, in Letter from the Birmingham Jail:


There comes a time when the cup of endurance runs over, and men are no longer willing to be plunged into the abyss of despair.  I hope, sirs, you can understand our legitimate and unavoidable impatience.  You express a great deal of anxiety over our willingness to break laws.  This is certainly a legitimate concern.  Since we so diligently urge people to obey the Supreme Court's decision of 1954 outlawing segregation in the public schools, at first glance it may seem rather paradoxical for us consciously to break laws.  One may well ask: "How can you advocate breaking some laws and obeying others?"  The answer lies in the fact that there are two types of laws: just and unjust.  I would be the first to advocate obeying just laws.  One has not only a legal but a moral responsibility to obey just laws.  Conversely, one has a moral responsibility to disobey unjust laws. I would agree with St. Augustine that "an unjust law is no law at all."