When I hear people make ridiculous and deliberately inflammatory statements, sometimes I have to resist the temptation to grab them by the shoulders and yell, "Will you listen to what you're saying?"

Not, of course, that it would be likely to do any good.  Although it may sound cynical, I think a lot of these people aren't reacting thoughtlessly and out of anger, which although it may not excuse rage-filled diatribes, certainly would make them understandable.  I think that a lot of these folks are saying and writing these things in a cold, calculated fashion, in order to make others angry, so as to incite their followers toward some political end.

Take, for example, the piece that ran yesterday in Top Right News, entitled "OUTRAGE: Obama Equates Christianity with ISIS at Prayer Breakfast."  Now, before we get to the commentary, let's see what the president said that got these people so stirred up:


Humanity has been grappling with these questions throughout human history.  Unless we get on our high horse and think this is unique to some other place.  Remember that during the Crusades and Inquisition, people committed terrible deeds in the name of Christ.  And our home country, slavery and Jim Crow all too often were justified in the name of Christ.

Harmless enough statement, you'd think.  "Don't use your religion to justify atrocities; it's been done before.  It was wrong then when they did it, and it's wrong now when ISIS does it."  Hard to see how anyone would argue with that.

But Obama made two mistakes: (1) he mentioned Christians, and (2) he's Obama.  So naturally, the backlash was instantaneous and vitriolic.  Here's a bit of the response from Top Right News:


Muslims began the slave trade in Africa — and still enslave people today.  ISIS is enslaving Yazidi Christians in Iraq and Syria.  Slavery ended here in 1865, and it was a devout Christian, William Wilberforce who began the abolitionist movement that ended slavery in the UK and US.

So, what you're saying is, the evil Muslims forced the Americans own slaves?  The nice Christian Americans struggled against it, only keeping slaves because they had no choice (and probably treating them as members of the family the whole time)?  Until finally good ol' Wilberforce threw off that evil Islamic menace and got Lincoln to free the slaves?

How ignorant of history are you? To take only one example, read what was written by James Henry Thornwell, the leader of the South Carolina Presbyterian Churches, in 1861:


Is slavery, then, a sin?...  Now, we venture to assert that if men had drawn their conclusions upon this subject only from the Bible, it would no more have entered into any human head to denounce slavery as a sin than to denounce monarchy, aristocracy, or poverty.  The truth is, men have listened to what they falsely considered as primitive intuitions, or as necessary deductions from primitive cognitions, and then have gone to the Bible to confirm their crotchets of their vain philosophy.  They have gone there determined to find a particular result, and the consequence is that they leave with having made, instead of having interpreted, Scripture.  Slavery is no new thing.  It has not only existed for aged in the world but it has existed, under every dispensation of the covenant of grace, in the Church of God.

Slavery is condoned over and over in the bible -- even going so far as to say that slaves should obey their masters "in fear and trembling" (Ephesians 6:5).

Funny thing, then, that the Crusaders spent a good bit of time on the way to Jerusalem hacking at Christians who were less than orthodox, and also the Jews, who seemed to have a way of getting the short end of the stick from everyone.  Godfrey de Bouillon, one of the exemplars of the Crusader mentality, famously vowed that he "would not set out for the Crusade until he had avenged the crucifixion by spilling the blood of the Jews, declaring that he could not tolerate that even one man calling himself a Jew should continue to live."  All through what is now Germany the Crusaders slaughtered every heretic and Jew they could find, sometimes with the complicity of local bishops, and sometimes against their orders (the bishops of Cologne and Mainz paid de Bouillon 500 pieces of silver to persuade him to leave their towns alone, which de Bouillon did). 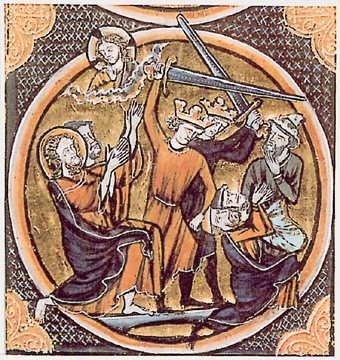 Murder of Jews during the First Crusade, from Bible Moralisée [image courtesy of the Wikimedia Commons]

Look, I'm not saying that the Muslim caliphate that was ruling Jerusalem at the time was a bunch of nice guys.  But the Crusaders were, by and large, narrow-minded, violent, hyper-pious, obsessive, bigoted assholes.  Painting the Crusades as a justified "response to Islamic jihad" is idiotic.

Of course, the uncredited writer for Top Right News who wrote the piece about Obama's speech probably doesn't care about silly little things like "facts."  All (s)he cares about is turning the Rage Parade against Obama by whatever means necessary.  And as we've seen more than once, this is manifesting as a manufactured and imaginary persecution of Christians in the United States, despite the fact that 3/4 of Americans are self-professed Christians (including the president!), and Christians enjoy an unchallenged hegemony in every political office in the land.

The whole issue here really boils down to "not lying."  Whatever you believe politically, you gain nothing by (1) twisting the words of your opponent to mean something that they obviously didn't mean, and (2) inventing history to support your contention.  It may inflame your supporters, but to the rest of us, it looks more like you have no justification for your stance other than screed, ad hominem, and outright falsehoods.
Posted by Gordon Bonnet at 3:11 AM