For the latest reason to freak out, consider the claim over at America's Freedom Fighters that some of your Facebook friends are actually FBI agents conducting surveillance on your activities.

Now, there's good reason to be careful of what you post, and it has nothing to do with some undercover cop posing as your old college drinking buddy.  Doing anything online leaves a digital footprint so big it can be seen from space, and potential employers and college admissions officers now do routine checks to make sure that the person they're considering hasn't done anything too sketchy.

Or stupid.  There are hundreds of stories of people who have been reprimanded, fired, or expelled for posting inappropriate stuff on social media, and most of them make you wonder how the people in question manage to tie their own shoelaces.  Examples include:
And so on.  So yes, it is possible to get yourself into hot water from what you post.  It's why I'm pretty careful; I'm a teacher, a public figure in our little community, and I try to be fairly guarded about what I say and do online.  (Not, mind you, that my life is rife with drunken debauchery, or anything.  I'm such an introvert that I consider drinking a beer and watching an episode of Lost in Space a wild night.)

But still, there's such a thing as taking paranoia too far.  And the article "How Many of Your Facebook Friends are Undercover Feds?" takes the concept of being cautious about one's digital footprint, and runs right off the cliff with it.  The writer contends:

U.S. law enforcement agents are following the rest of the Internet world into popular social-networking services, going undercover with false online profiles to communicate with suspects and gather private information, according to an internal Justice Department document that offers a tantalizing glimpse of issues related to privacy and crime-fighting.

Which applies to me how, exactly?  They can check me out all they like.  Oh noes!  The Justice Department is going to see my vacation photographs!  Horrors!

The best part, though, is the article's signoff:


We urge you to very careful about who you ‘friend’- They could be a part of the government or the Left’s attack on Conservatives… GOD BLESS AMERICA!

And of course, they never tell you how you might tell your true friends from the Undercover Leftist FBI Covert Operatives.  You're left suspicious of everyone, which I have no doubt is the intent. 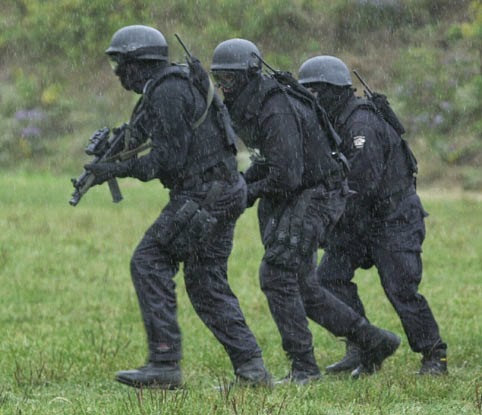 What I find funny about this is two things.

First: you seriously think that you're that important?  Unless the person reading this blog is some kind of master criminal or terrorist or spy, the FBI clearly has better things to do with their time and resources than to go through photographs of what you had to eat at the Chinese restaurant last night.

Second: do you really think that if the FBI were interested in you, they wouldn't be able to find out about you unless they friended you on Facebook first?  That's so naïve, it's kind of adorable.  I mean, can't you just hear the conversation?


Agent #1:  "We've got to crack this case, and it all depends on finding out what Steve Hickenlooper had for dinner last night!  But dammit, he won't accept my friend request!"

Agent #2:  "He's a wily one, Steve is."  *snaps his fingers*  "Hey, I've got it!  Maybe if you sent him a friend request posing as his high school girlfriend, LouEllen Finkwhistle!  He'd fall for that!"

Agent #1:  "Isn't LouEllen the one who got fired for calling her boss a 'pervvy wanker'?"

Agent #2:  "Yup.  She deleted her Facebook account after that happened.  So if you pretended to be her, Steve would never know it wasn't actually her."

So anyway.  My advice is continue to have fun on social media, but do be careful what you put out there.  The rule of "once you put it online, it's online forever" is a pretty good one to follow.  But as far as thinking that your online contacts are all undercover agents spying on you -- relax.  No offense, but you're honestly not that interesting.

Of course, that's what I would say, isn't it?  So thanks for clicking on this post, and all.

EX-cellent.
Posted by Gordon Bonnet at 3:25 AM